"Give him Madame Rochas. A few drops at a time."
~New Yorker magazine vintage ad 27 November 1965 Madame Rochas was the signature scent of my grandmother in her mature years and lovingly picked by my own mother as well, when my grandmother passed away. They were unconsciously true to the wise words of a vintage ad: "Rule: Your perfume should change as often as your mood. Exception: Madame Rochas." It does make for a glorious signature fragrance...I well remember smelling the perfume on both women as a little girl, thinking it smelled simply wonderful. And it still does, transporting me to an elegant vision of old money class, beautiful restraint, no vulgar displays of anything, be it flesh or wealth. But that's not to say she's not sexy or femme either. Another vintage ad puts it well: "In France romance is a national passion. So is Madame Rochas". And it is indeed very much a "perfume in the French style".
Like classical art, this Guy Robert scented creation always felt like it was simply striking the right proportions.

Character & Attitude: A Grande Dame
To describe Madame Rochas feels a bit like ornamenting that which needs no ornament. Much like my maternal grandmother, she is a Grande Dame, never an ingenue, girl-next-door, damsel in distress or soubrette. This might be the reason this 1960 creation fell somewhat out of favor commercially in the last 15-20 years when perfumery reached its apogee of fragrance creation ideals focused on naive youthfulness, immediate accessibility or plain out weirdness for the sensationalist/witty effect. Much like on cannot imagine the generation of CK One approaching their elders' vanities with anything but a dismissed "pffft", one cannot envision Madame Rochas on anyone under 30. Unless of course we're talking a perfumista who dabbles in decades past.

On the contrary Madame Rochas is in a way Lanvin's Arpège revisited for the 1960s and the new jet set emerging, a sort of Parisian Mod, Jackie Kennedy shops French designers before becoming First Lady. Madame Rochas is also interesting as a milestone in perfumer's Guy Robert opus in that it set the stage for his Hermes Calèche to follow the following year, Madame Rochas' drier twin sister; the latter would would influence the market for quite awhile.

The fragrance was created specifically under the commision of Hélène Rochas, the young wife of the Rochas house founder, for whom Femme de Rochas was also made when she went into wedlock. She was only 30 when the perfume was officially issued, showing just how far and wide tastes in what is considered youthful have shifted.

Scent Description
The aldehydes open on a dewy but sunny April morning: Hyacinth, lemon and neroli are shining with green-waxy-lemony shades before an indeterminate floral heart opens with woody tonalities (tuberose, rose, narcissus and jasmine). The propelling provided by the muskier, mossier, lightly powdered (never talc-like) base extends the florals and woods on for hours. The complexity of the formula and the intricate structuring of its accords accounts for its radiance and tenacity.
The powdery orris feel is underscored by the fresh and at the same time musty vetiver; but the proportion is such that the end result doesn't smell musty at all.

This bright, vivacious, graceful bouquet gains subtly soapy nuances of corpulent lily of the valley with only a slight hint of floral sweetness; its delicious bitterness, almost chypré, lurking beneath the green flowers is its hallmark of elegance. Inedible, smelling like proper perfume with a surprising warmth, ambery-like, like honeycomb smelled at a distance, Madame Rochas is an aldehydic floral perfume in the grand manner and thanks to its perfect harmony, lack of uprightness and full on humanity it is among the most legible in this demanding genre as well, not to mention romantic and sensuous too.
If you thought you couldn't "do" aldehydic fragrances because you can't succumb to the most famous example Chanel No.5, maybe Madame Rochas will do the trick. It sums up good taste. 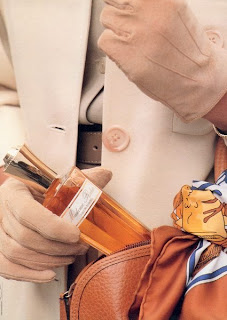 Fragrance Editions: Vintage vs. Modern & Bottle Design
The original Madame Rochas was introduced in 1960 and was re-issued 1982 in its second edition, re-orchestrated by Jean Luis Sieuzac. The original bottle design represents a replica of a 18th century bottle which was in the collection of Helene Rochas herself. The box is printed like a tapestry.
The new edition design was adapted by Pierre Dinand and is available in 30, 50 and 100 ml of eau de toilette.  The box is white with gold lettering.
The new version of Madame Rochas is somewhat lighter than I recall and less spicy- powdery, emphasizing green floral notes on the expense of balmy, woody ones. But it's still classy and collected at all times and a bargain to get.

Who is it for?
I would recommend this for all Calèche, Climat de Lancome, YSL Y, Guerlain Chamade and even Dioressence lovers. Climat is much more powdery and immediately aldehydic, Y is more chypre and Chamade relies more on hyacinths. Dioressence starts with sweeter notes in the openening and is much more animalic-smelling in the deeper notes, especially in the vintage orientalised verion. Madame Rochas could also be a great fit if you like things like Rive Gauche by YSL, Paco Rabanne Calandre, Revillon Detchema or Tauer's Tableau de Parfums Miriam.
*Share with link: Wednesday, May 30, 2012