"Perfume is made mainly so that one remembers the woman who wears it. I like to call it the elevator effect. This is the man who goes to meet his lover—whether it be his fiancée, his wife, or his mistress—who has entered a building before him. She is wearing perfume, and he smells it. Suddenly his heart beats faster and the blood rushes to his head." 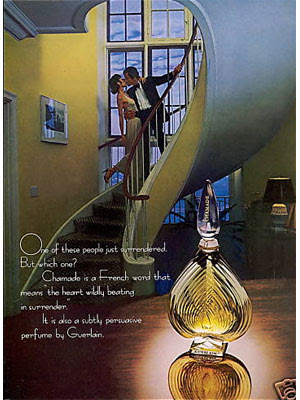 Of all the approaches to fragrance criticism I’m most dreary of the revisionist approach, pulling a scent out of the context of its time and aiming at regurgitating an ill-advised paradigm. Somehow the critic’s bias shines through more than anything else. Of course, fragrance masterpieces deserve to be respected—and insincere efforts need to be chided—but a fragrance ultimately needs to be judged based on its genre and its cultural context. It’s not a fragrance critic’s job to ignore the innovations set forth by a classic fragrance, nor forgetting to mention the classicism within a new launch. They are simply two sides of the same coin in perfumery.

After more than four decades Guerlain Chamade is of course deservedly termed a grand classic, but to assume that a classic-smelling French fragrance lacks an ounce of rebellion is not a correct notion, either.

Perhaps the biggest misconception about Chamade is its doyenne status. There lies the paradox: sure, the definition of youth has changed dramatically, but back in 1969 Chamade’s opening would be considered quite interesting. Hedione. Blackcurrant. All then new materials and not widely used. Of course Edmond Roudnitska employed hedione brilliantly in Eau Sauvage (1966), but the chemical hadn’t been widely dared in women’s fragrances. Nowadays the blackcurrant note has been used to a fault, but Chamade was arguably the first to have done so. Again, one shouldn’t fault the early adaptor, even if the innovation becomes commonly accepted.

But I’m really ahead of myself. The trembling of the heart really starts with two key players: the interplay of galbanum and hyacinth. Both are quite polarizing, having a refreshing but strong-willed diffusion—hyacinth, having an unapologetically white floral scent with a slightly bitter edge; galbanum, emitting an all-out, almost knife-sharp verdancy. The chills, when set on the typical Guerlain warmth, surprisingly pulsate and mimic the intrigue upon feeling "the mad ache". (Doesn’t one often feel a moment of clarity even when falling madly in love with the wrong person? The interplay of fire and ice can be so cruel sometimes.) Had the opening act been allowed to dominate the fragrance would have been reduced to a bony, postmodern solarium, but all this feels like the opening clash of the battlefield surrender signal.

The undulation between the cold and the warmth really creates a dual effect when narcissus and vanilla add to the tension. Within the context of ylang ylang and blackcurrant the narcissus feels opulent and insolent at the same time, yet there’s a certain ambiguity about the shapelessness of it all, as if the character of Sagan’s heroine Lucile comes to life. Chamade the fragrance would have been the necessary luxury she craves, yet like the fragrance she doesn’t fully give in when facing her feelings, essentially not out of defiance, but actually coming from an undulating ambivalence. Do not be mistaken by the gauzy, silken aura with a slight golden sheen: Deneuve has that the necessary indirectness down pat—the confusion is essentially self-serving and really the destination, not the process.

Come to think of it Chamade’s legendary development curve adds a beguiling interplay to the theme of Sagan’s novel as well: this has never been a forthcoming, no-barred-hold type of wild attraction story at heart, but more of an exquisite torture. The pang of the hyacinth and galbanum really hold fort for a good while before the drydown of the narcissus-amber sets in. In fact it’s exactly this character that makes exposes the problem of testing fragrances on paper blotters: testing a multi-dimensional olfactory sculpture on a two-dimensional medium is an act in futility in itself. 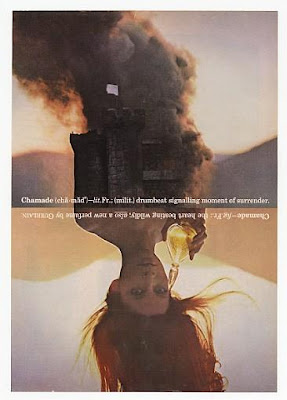 On a personal note I was determined not to make that sampling mistake when presenting Chamade to my godmother Jeannie, instead testing the scent directly on her skin. Surely enough the golden gauze envelopes her upon first spray; after decades of using L’Air du Temps, Chamade became her signature, no doubt in part because my beloved godfather was hooked from the get go!