What's in a name? What's in a material? Shakespeare's immortal line has a lot to account for. Lots of scents with heliotrope pose as "almond" or "marzipan" or "powder with tonka". These are all scents with a kinship that runs deeper than initially thought of. The synthesized material that is dosed into compositions that take heliotrope as a starting point is quite strong and can be an overwhelming molecule to work with if one isn't careful and discreet. One of the first major fragrances to make judicious use of it, in a light enough composition, so as to wear it inconspicuously, was Après l'Ondée by Guerlain, "after the spring shower" as the name implies.

"Ça se porte léger" (this wears lightly) is the motto behind the concept of these Guerlain creations that aim to offer gouaches rather than oil paintings. It's more akin to the pale, hazy colorations on a Monet sky than the almost fauve brushwork and vivid color palette on a Van Gogh, to bring an art analogue. If one were to look for a fauve heliotrope, one would rather turn to Cacharel's Loulou.


I personally find Après l'Ondée a rather quiet fragrance indeed, almost timid, with a sweetish air that is not immediately thought of as feminine (quite different than the airs that current feminines exhibit!), with lots of heliotropin to stand for cassie, which is the predominant element. Some heliotrope scents also recall cherry pie, or lilac and powder, but not Après l'Ondée. Even the almond is not particularly identified as almond, it's a haze of lightly warmed, blurred, hazy notes, a cloud of a distant scent.

The violets, like you might have heard, are quite fleeting in this Guerlain perfume, especially in more recent incarnations which are warmer and cuddlier than the older ones, notably the extrait de parfum in the Louis XV style bottle. The anisic note on the top note is also a brilliant addition (created through the use of benzylaldehyde, it would be recreated more forcibly in L'heure Bleue some years later), since it brings a chill cooling off the first spray and balances the warmer, almond paste flavor of the heliotrope in the heart.

Après l'Ondée is also rather less known than L'Heure Bleue, so even Guerlain wearers on the street might not identify it right off, which is always a good thing in my books; it would also obliterate your qualms about it being perceived as solely feminine.
*Share with link: Friday, July 10, 2020 2 comments:

White Zagora by The Different Company stands as an optimism shot for occasional gloomy days, even if the heat does not let us perceive them as such. It's an uncomplicated scent of bright citruses allied to a core of orange blossoms, with the greener (thanks to the note of neroli, the distillate from the citrus aurantium flower), the crisper, more joyful and spring-fresh elements pronounced.


Whenever I spray the vivacious, optimistic scent of  White Zagora, composed by perfumer  Emilie Coppermann, it makes me think of going out, striding with big steps to a purposeful destination that will fulfill important meetings and pleasurable sights to quench my soul's thirst.

I predict that it will get me through summertime, especially if seascapes elude me for longer than anticipated. It's a Mediterranean scent, but it does not particularly evoke aquatic destinations, despite its refreshing character. It's "white" but not detergent-like. It's pure, unadulterated pleasure in a bottle!
*Share with link: Thursday, July 09, 2020 1 comment:

First of all, let me prephrase this review by saying the original vintage edition of Molinard de Molinard from 1979 was a gift of my beloved, who chose it by himself at a rather tender, unpretentious age when the love of scent was visceral and not plied with words that pertain to the perfumery vernacular like it is sprinkled with now. That fragrance therefore marked me in so many ways that it's impossible to bypass this sweet memory when trying to assess the scent itself. Yet the Molinard company revamped the fragrance in recent years, regretfully changing the beautiful Lalique bottle with the dancing nymphs with a rather simpler, although not by any means plain, design; so I felt secure in trying to bring forth my thoughts anew.

It's still a sprightly green floral, Molinard de Molinard eau de toilette, the way they used to do fruity with a touch of green, instead a good lather of shampoo, back in the olden days. It never comes off as an entirely "clean", entirely lathered sort of scent, but rather something with a bit of a grime from a roll in the garden or the outdoors at any rate, the way Ralph Lauren's 1990 launch of Safari for women also did. The two additionally share a very significant note of marigold in the core of the formula, exuding a ripe apple-like scent, which bathes everything in good humor and diaphanous light.

And then the heart-aching synergy of jasmine and rose are singing in the green octaves of the verdant materials (earthy vetiver, oily and sweet narcissus, bitter galbanum) which come through to whisper that we're dealing with a nymph, a sprite, a creature of the great outdoors and not of the Parisian salon, even if she comes out of a French bottle with a cute ribbon on the neck. And are we are thankful that it's still that picture of how he pictured us in his imagination back then...
*Share with link: Wednesday, July 08, 2020 1 comment:

Britney had told us quite a while ago, in her lyrics, "I used to think I had the answers to everything, but now I know that life doesn't always go my way. Feels like I'm caught in the middle, that's when I realize I'm not a girl not yet a woman. All I need is time, a moment that is mine while I'm in between."  We chose not to listen, dismissing her line as a vanity project... what a misfortune. And that's probably our snobbism which saw her fragrant offerings with contempt in our quest for the pearl beyond compare, and it was our loss in the end. In this case, Fantasy The Naughty Remix went unsung for far too long. Like the two faces of Janus, it launched as the "dark" variation, while Fantasy The Nice Remix was supposed to be the tamer one.

Thankfully one can see in the end, even when temporarily blinded. And what I can now see is a buttery, softly musky, fluffy moment suspended in time amidst shredded white chocolate while gazing in the mirror of my early youth's remembrance. A curvy figure dancing with pink pom-pom kitten-eared slippers in front of the whole body length mirror, holding a brush as a makeshift microphone. Suspended between the teenager vanilla expectations and the powdery halo of becoming a fully fledged young woman out to stride in the world with confidence. Not a girl, not yet a woman.

A wonderful cheapie gourmand that holds the sugar in check to reveal a coziness that one nostalgizes about plentifully when older. And the fragrance lasts much more satisfactorily than a simple teenager body spray, being a solid eau de parfum seeing me through a full work day. Those how loved Fantasy will find a small undercurrent of the original underneath this variation.

Currently I see Fantasy The Naughty Remix sold as a gift set of 30ml eau de parfum with complimentary body lotion and rollerball for around 25 Euros or less on Ebay.
*Share with link: Tuesday, July 07, 2020 1 comment:

Everything there is to know about the feminine fragrance by Trussardi from the early 1980s (1984 to be exact) can be seen right from the start. The mock croc white bottle is revealing everything there is to know about this distinguished, yet extinguished scent. It's substituted by lesser mortals. But it keeps a soft spot in the hearts of some of us.

Both Trussardi scents (men's and women's) from the early 1980s were encased in that most evocative and luxurious of materials—supple leather—which hugged their contours the way one envisions the molds used by a sculptor. The shape is recognizably that of a flask, and Nicola Trussardi himself was responsible for that gorgeous presentation. There was a textural element involved with the mock-croc motif, inviting the hand over the surface to touch, to feel...the anomaly in the grain so inviting, so exciting, so mature... The classic sharp chypre structure with a lush floral component in the heart was not alien to our house. My mom's beloved Cabochard with its leathery note—arid, nose-tingling, and almost masculine—would only derive from a house specializing in leather. The spicy top note of coriander and the touch of green herbs, plus waxy aldehydes, gave a clean opening. The alliance with the styrax and leathery tonalities which make up the basic core of its base is what makes it a juxtaposition in two different ideas: herbal crispness pitted against inky smokiness. They're both non-smooth, non-pliable ideas, but they match in headstrong confidence. It's the material which flamboyant women with a devil-may-care swagger thrive on. 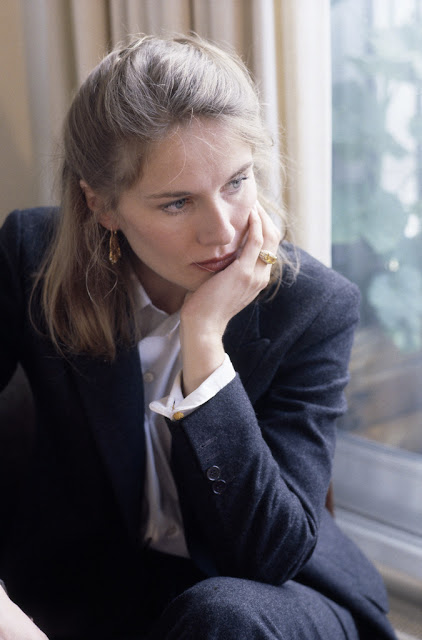 Trussardi for Women (1984) in its vintage iteration, I recall, gave off that classic perfume-y vibe which many chypres of the 1970s and 1980s used to emit, such as Jean Louis Scherrer or Gucci No.3, yet softer and less bitter than something more galbanum-rich such as Or Noir (liquid black gold like I have described in my article) or Silences. They were scents of clean grooming, yet sophisticated preparations, not just shower fresh like nowadays. Today, men of taste might wear them with no problems, and the vintage concentration rivals many a modern eau de parfum for sheer longevity on skin and clothes. It's such a pity that a newer generation will only be confused amidst all the different Donnas in the evolving and evolved Trussardi canon.
*Share with link: Saturday, June 06, 2020 No comments: