Soapy Fragrances: More than Just a Matter of Clean

~"Father dear, will you not make ready for me a wagon, with strong wheels, that I may take to the river for washing the fine clothes that I have lying dirty here?" (Nausicaa to Alcinous. Homer6.57). 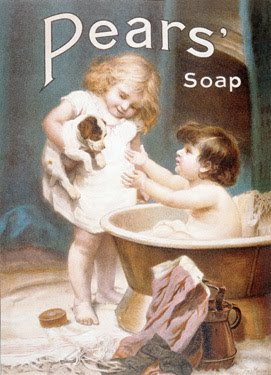 ~"My hands are of your colour; but I shame
To wear a heart so white. [Knock]
I hear a knocking
At the south entry: retire we to our chamber;
A little water clears us of this deed: How easy is it, then!
(Lady Macbeth speaking to her husband, Shakespeare, Macbeth, Act II scene 2)


~The scene: Drab British police station of the early 1960s, Christine Keeler leaves after being interrogated on accusations of prostitution.
Police officer murmuring under his breath, convinced of her guilt: "I can smell the pink Camay on them..."
(from the film Scandal, 1989 focused on the Profumo affair) 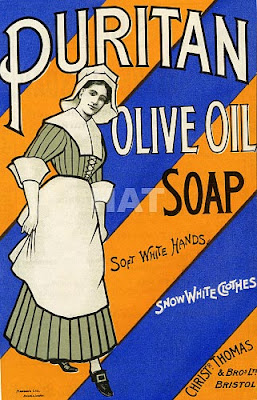 From the feeling of well-being in classical times (when people used a mix of ashes and olive oil) to the purification concept in later Christianity, all the way to its ambiguous modern connotations of both Puritanical "cleanliness next to godliness" and the loaded innuendo of superficially washing away improper smells deriving from fornication (hence the term παστρικιές to denote whores) , the history of soap is full of interesting trivia and manifestations of perception put before smell. A little soap and water talk loudly. The advertisements of soap, especially, both reflect the culture and create it. Functionality, purity, preservence of youth, sensitive complexion caring, well-being & grooming, a lingering trail of freshness... 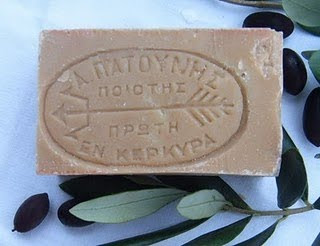 Soapy fragrances in many ways carry on where the humble bar of soap left off. And they constitute a subdivision of "dry" scents (explored here in more detail). Although in our modern germ-phobic environment they present a solace of "clean" amidst all the pollution, a form of "olfactory safety bubble" as well as a safe choice in an office environment, it was not always so. They used to hint at social status, meaning the wearer could afford daily baths with hot water, a refined taste for delicate smells instead of bombastic heavies and a predeliction for the fine several-times milled Savon de Marseille, based on pure olive oil same as the Greek varieties, still today produced with the primitive and oh-so-nostalgic methods of air-drying. It's a reflection on luxury, on perception, on reverse snobbery too. L'Eau Serge Lutens cemented this for eternity.
When someone casually asks shrugging the shoulders "why not just take a shower?", they're not realising that there's more to soapy scents than a simple scrub me down with just any soap. Cast your mind back to the (fictional) Ogilvy Sisters Soap admired by the protagonists on a young Gabrielle Anwar in the cinematic remake of Scent of a Woman. [watch the clip] 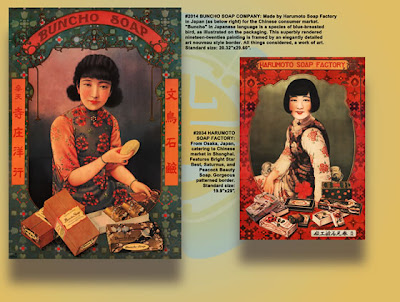 But what does "soapy" mean in fragrance terms? The term is usually used to refer to fragrances which smell like soap. Mind you, not the current, frou frou varieties that are further aromatized with God-knows-what (berries, marshmallows, you name it!), but some of the classic soaps like Ivory, Lux, Camay, Pears and Dove. Their alkaline smell that reads as both bitter and sweet, their vague floralcy, their unmistakeable trail of something man-made...as soap truly is. "Man-made" might be an accurate term, yet it might also connote artificial, and in turn shallow and undesireable, especially in a field such as perfume where many perfume enthusiasts do not like synthetic base notes and complain about perfumes smelling increasingly as if they come from creative lab composing instead of naturally derived materials. Yet by their very nature, soapy fragrances rest on creative lab composing.

When Ernest Beaux presented Coco Chanel the iconic No.5 when Coco has asked him for a perfume that "smells like a woman and not a rose bed", that cluster of citric-soapy aldehydes ~specifically C10, C11, C12 thus code-named by chemists to show the number of carbon atoms they contain~ recalled cleansing rituals. But the association was not fully formed yet. In fact the reverse was the case: Aldehydes, first discovered in the lab in the late 19th century (Fougère Royale -Royal Fern- by Paul Parquet for Houbigant in 1882 was the first perfume to feature them) really became popular after the introduction and commercial success of Chanel No.5 (and its successor for the American market, No.22). Even today Chanel exploits that "clean" honeyed-aldehydic vibe in their offerings: Beige in their Les Exclusifs line is a case in point. On the strength of that popularity, several soaps were onwards aromatized with the aldehydic "bouquet" present in the famous fragrance, thus ensuring them recognisability and familiarity as well as a "classy" image (Several "rustic" artisanal varieties on several parts of the world don't smell aldehydic).

Nevertheless aldehydic does not necessarily equate "soapy" per se, nor vice versa. Some aldehydic fragrances include hints of soapiness (Piguet's Baghari, Madame Rochas, Rive Gauche, Revillon's Detchema, Fleurs de Rocaille, Calèche, Nude by Bill Blass) but they do not immediately read as "soap" the same way that others do. For instance, take a bottle of Sicily by Dolce & Gabanna: pure, fat, alkaline soap garlanded with musky accents. And yet Sicily is aldehydic! So is White Linen, a descendant of Chanel's No.22 with more piercing notes and less sweetness. Confused much? It might be easier if I specified that it depends on which direction the perfumer wants to tilt the pendulum. See Essence by Narciso Rodriguez: a contemporary soapy via over-stretching aldehydes. 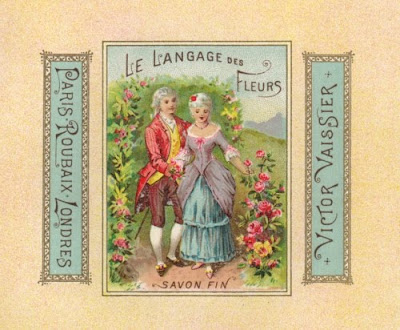 Several other elements, especially traditionally soap-entering florals such as rose, jasmine and iris with a good dose of lily of the valley (muguet) and citrus/verbena, also give an impression of soapy. L'Occitane Eau de Quatre Reines takes a sudsy approach to rose (and in some part so does Joy by Patou). Creed Original Vetiver a similar one to the eastern grass by the same name, Pure White Linen by Lauder does the trick with a bone-dry lily of the valley. Lily of the valley is treacherous ground: too much of the synths used to replicate it and the fragrance might start resembling a scrubbed-down bathroom, due to its ubiquitness in functional products. 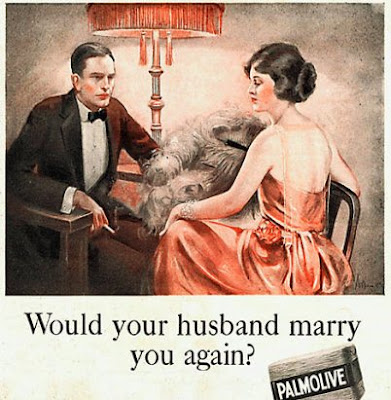 Dove on the other hand is a soap with an identity crisis of the most delightful variety: The synthetic irones (as in iris) create a smooth, delicate scent almost as good as perfume; it's a mystery why a fine fragrance based on that smell hasn't been created yet taking in mind many adore it.
Other fragrant examples rely on synthetic musks and not much flowers. The "just out of the shower" smell was heavily advertised, burnt on our cortex first by the advertising of Glow by Jennifer Lopez in 2000. From then on, things catapulted and the bastion of "shower-fresh" smells heavily relying on musks were a matter of course. But not all is bad and Glow is still among the best in its category. The image of "freshly cleaned linens left out in the sun to dry by a field of lavender" suddenly became very desirable, to the point that it escaped household products and suddenly became part of ourselves: This was a defining moment in the zeitgeist, the point where the detergent producing companies took over the world of scent by storm, shoving down the formulae and molecules of functioning products to the throats of lab-perfumers in fine fragrance making companies.
Men were not left behind in this quest of "shower fresh", competitiveness in the boardroom needed the assurance of grooming: Smell Carriere and the original Gendarme, both by Gendarme: they're clearly reminiscent of a wash with good old-fashioned soap on a rope. Men can also rever in the soapiness of Pour Homme by Paco Rabanne (where the lavender-coumarin fougere recipe is especially cooling) and Miller & Berteaux Spiritus/Land #2. Try Pure by Mark: a bar of soap in liquid form!

Philosophy with their Pure Grace and Amazing Grace continue on a popular theme, right where they left off with Baby Grace and its powdery vibe we explored in another article. Demeter have Pure Soap in the library of scents. Eau de Gantier by Maitre Parfumeur et Gantier uses citrus and blackberry top notes to lift a bath-mitt-worthy bunch of musks. Infusion de Fleurs d'Oranger, a limited edition by Prada, is very sudsy, something lots of orange blossom scents do. Cologne by Mugler follows a more citrusy direction which also ends on white musks for a prolonged effect of latheriness. All are unisex and can be enjoyed year-long. Another one of their selling points, making them instant standbys. 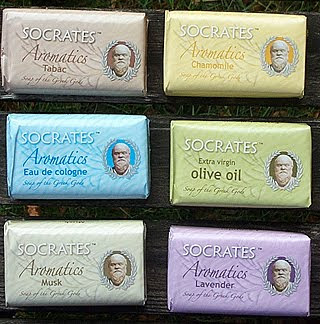 Still there is the difference between bar soap and laundry detergent. Several modern fragrances with a concept, lifestyle approach behind them aim (or are restricted due to budget) for the latter: To wit, Lather, Shower Fresh, and Warm Cotton from the Clean line. Laundromat by Demeter. Egyptian Goddess by Auric Blends: pure fabric softener. Or Chanel Chance Eau Tendre: it happens to the best of them....And several screechy lily of the valley scents which do this inadvertedly. When it comes to soap, it's a slippery slope...

Which are your favourite "soapy fragrances"?