The Spy who Came In from the Cold ~Rive Gauche by Saint Laurent: fragrance review 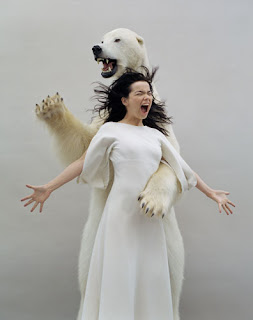 “What KGB agents would have worn to seduce James Bond”* is not a bad description for any fragrance. But when it applies to an Yves Saint Laurent one you know it has the pedigree and the icy demeanor of Daniela Bianchi in From Russia with Love. Ian Flemming was no shrinking violet when it came to assigning fragrances to his literary heroines, starting with Vent Vert{1} and Guerlain’s Ode{2} and progressing to Chanel No.5{3} and Caron’s Muguet{4}. It would be intriguing to imagine Rive Gauche among the arsenal of his femmes exceptionelles!

Rive Gauche came out in 1971, aimed as the griffe of Laurent’s ready-to-wear line by the same name, meaning “left bank”. Left of the Seine of course, the place of abode for young bohemians and artists at the time. Created by Jacques Polge when his Chanel in-house position was perhaps but a distant dream (Henri Robert was composing the fragrances of Chanel at the time, specifically No.19) Rive Gauche was directly influenced by the ground-breaking Calandre (1969) by Paco Rabanne (which took its name from a car’s radiator grill in French breaking ties with romantic traditions). Like its predecessor it was a modern take on aldehydic fragrances. Contrary to the take-off note of aldehydes in Chanel No.22, where they shine with all the might of a soprano coloratura to extreme sweetness, in Rive Gauche, as well as in Calandre, the aldehydic hit upon spraying is snowy-cold, drier and with all the paradox of the Brave New World ahead: the two fragrances share a metallic rose of frosty petals that tingles the nose rendering that most romantic of blossoms into a hologram of a flower, underscored with the touch of green powder in the form of cool iris and vetiver, the enigma of the spy who came in from the cold. 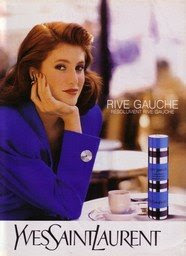 Aimed at the young, Rive Gauche projected the audacious profile of a chic woman always dressed in electric blue like the silver-banded canister itself. One who flirts freely with a touch of bravado. Yet the fragrance now seems a little caught in the whirlwind of its era although its appeal never fades: it smells classy, not raunchy; mysteriously blue floral, yet non romantic English bone-china-pattern-style ~it’s flinty! And its amazingly salient characteristic is smelling fabulous on just about anyone: any difference of opinion is accountable down to perception and personal taste.

Rive Gauche for Women was savagely altered in a reformulation during the Tom Ford tenure as artistic director of Yves Saint Laurent, with some difference in packaging. A men’s version was introduced in 2003 (in my opinion redundant as the feminine could be worn by a man of confidence), a “formule Intense” which reportedly is closer to the original and thus worth testing if you have fond memories of the latter. The 2004 Rive Gauche Light for women is but a pale shadow of itself, while the non-alcoholic Rive Gauche Fraîcheur from 1995 is a hazy watercolor interpretation that I am sad to report is terribly fleeting.