"None but the Mali Mountains contain Sandalwood" is written in an ancient Buddhist scripture. We know this is not the case, but the essence produced by Santalum album (a member of the Santalaceae family) has captured the imagination of man for 4000 years. Sandalwood is the natural product par excellence: a scent so fine, so rich and yet with a fresh top note, so creamy sweet and so enduring that it has inspired generations of men and women to harvest its precious, sacred trunk in order to imbue products for personal and public use with its fine aroma. I vividly remember the sandalwood soaps I received as a gift when an impressionable teenager by a well travelled, older cousin: the creamy, woody, incense-y ambience was irresistible, to the point that a bar was tucked intact in my drawer of small tops to produce a spontaneous "aaah" of rediscovery each time it was pulled out. 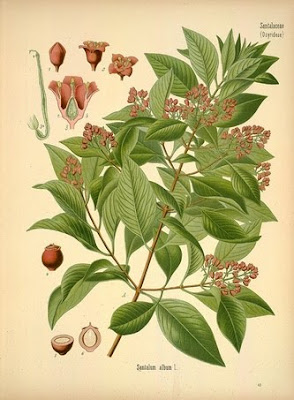 Japanese temple incense is most often infused with the aroma of sandalwood in tandem with agarwood. Indian incense often is nothing but. From soap to shaving cream and from essence oil to fine fragrances, sandalwood is one of the most traditional and yet still popular "notes" in all of perfumery.

As I bathe my skin with real Mysore sandalwood soap, stockpiled a while ago as mentioned, I can very well see why: the suds retain a smell that is beautifully nuanced, clean yet rich, midway between masculine and feminine, with a beautiful lingering effect of polished creaminess on silky pyjamas and dressing gowns.

The production of sandalwood essence

It is a time consuming process and depends on the maturity of the trees, the length of distillation time and the experience of the person distilling. Most time-honoured method of extraction of sandalwood oil has been hydro-distillation, lately phazed out by steam distillation and CO2 extraction (which is more realistic to the raw material of the wood, due to the reduction in heat processing)

The endangerement of natural Indian sandalwood
Especially in the famous Mysore region of Karnataca and of Tamil Nadu where they're protected by state law, even as early as the 1980s, the depletion of the trees due to over-harvesting has had several adverse effects:


1) sandalwood oil is one of the most-often adulterated essential oils;

2) the cost of sandalwood oil is rising dramatically (about 25% per year);

3) due to the value of sandalwood oil, the trees are being illegally cut, leading to the waste of this precious resource as trees that are too young are cut, or trees are cut but the roots are left to rot (the roots are the most valuable part of the tree from which to extract the oil). Additionally, this illegal poaching has lead to several murders of forestry officials and other crimes indicative of the black market;

4) the resource is becoming scarce. The current production of sandalwood trees is not enough to meet the demand of consumers. The trees are difficult to propagate and must grow for at least 30 years to become suitable for harvesting. The forestry departments in India are regulating the amount of material that is cut and sold, but there are many demands for other use of the land – for example, cattle grazing, the need for wood to keep people employed, etc. [1]


This situation has required the gradual substitution of this precious ingredient in fine fragrance with synthetic varieties (gradually and to the rhythm of depletion of any given brand's inventory of raw materials), such as isobornyl cyclohexanol. Some of them are quite costly in themselves and beautiful to smell, as evidenced below, possessing some of the beloved "creamy", milky facets of natural sandalwood. From a technical standpoint the natural consistutents of sandalwood comprise terpenes, terpenols and terpenals, i.e.terpenoid alcohols.


Several sandalwood synthetics nowadays comprise part of a perfumer's palette for both their technical merits (they are capsule forms of the effect of an otherwise very dense and demanding essence that is amazingly complex in nature), as well as for their isolated facets that boost one aesthetic choice over others, according to said perfumer's mood. Sometimes they can even co-exist as in the case of Guerlain's Samsara, the beautiful balance of natural and synthetic in one.

Among those synthetic sandalwood notes, Polysantol, a former Firmenich trademark, is quite popular thanks to its intense diffusion and realistic replication. Otherwise known as santol pentenol due to its structure it enters many a fragrance composition imparting herbal and almost tropical nuances with an animalic touch.
Beta santalol or technically (-)-(1'S,2'R,4'R)-(Z)-beta-santalol (interestingly its positive entaniomer is odourless) is also a nature identical typical sandalwood note. It's the reverse case for the enantiomers of alpha Photosantol, the positive being strong and diffusive, the negative weak. Process producing sandalwood organoleptic substances from camphogenic aldehydes produce the prized Firsantol, another Firmenich trademark and a favourite with perfumer and writer Arcadi Boix Camps. Levosandol by Takasago introduces a sharper, more austere cedar note within the creamy sandalwood impression picture. Ebanol [(1S,2'S,3'R)-Ebanol], a Givaudan trademark, on the other hand is noted for its potency. Symrise proposes its Fleursandol which has a very strong, animalic-laced sandalwood note with floral elements surfacing. Other sandalwood substitutes present various unexpected facets, from the very clean with phenolic/guaiac notes on top and cashmeran notes at the finish like some enantiomers of HomoPolysantol to the waxy, leathery of other enantiomers of the same ingredient. The quest for sandalwood substitutes is under way as we speak with several patents from Japanese companies under way and is only going to accelarate in the coming years, despite the illegal poaching in Mysore of immature trees or the import of sandalwood from other regions of the Far East.

A recent addition is a synth blend smelling of sandalwood tagged "HipNote Sandalwood", composed by Tru Fragrance (formerly Romane Fragrances), claimed by the company producing it to be picked by perfumer Harry Fremont of Firmenich no less: “The use of synthetic substitutes within the fragrance world, like those found in "HipNote Sandalwood" and many of the season’s product launches, are essential in assisting in sustainability efforts, helping to ensure the fragrance development process does not destroy natural resources. By using these synthetic blends, we are able to eliminate any allergens that are found in nature and create consistency across different batches of the same fragrance product,” adds Amy Braden, director of product development for Tru Fragrances. The limited edition HipNote Sandalwood is available by request in limited quantities via “Hipnozes by Tru Fragrance” on Facebook, a dynamic, interactive online community which you can visit at www.facebook.com/Hipnozes 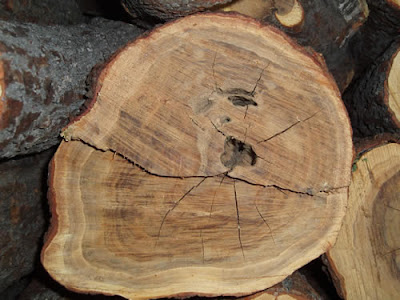 But not all perfumers or all fragrances aim to merely replicate that classic Indian sandalwood scent: In Le Labo's case in Santal 33 for instance they're quite clear on using Australian sandalwood (Santalum spicatum), which is a different variety than Mysore sandalwood (Santalum album): indeed the Australian variety is more pungent, sharper in its dryness, with less density, almost metallic in its fine smokiness, still compatible to scent of skin.

Another sandalwood tree variant sometimes used for its rich essence oil is Amyris balsamifera, or West Indian sandalwood or simply amyris: Though not a true sandalwood, it still bears the nuanced, distinctive smell and is useful in soap production (and increasingly fine fragrance, such as the latest Francis Kurkdjian Amyris duo of fragrances) where the Indian variety would rocket the cost to stratospheric heights.

Finally the New Caledonian sandalwood variety is yet another species with a scent profile between that of the Australian and the Mysore varieties and it looks like it's going to be supremely popular in the near future.

LIST OF FRAGRANCES WITH PROMINENT SANDALWOOD (in alphabetical order):