What does "creamy" mean to you in relation to fragrance? Is it the rich, sundae vanilla feeling you get while licking a cone, the thick yet refined taste of a bavaroise or is it the beachy tropical scent you get from a lush floral perfume? And what about lactonic? You hear this term brandished a lot, especially in relation to vintage fragrances, but where does it lead you? What does lactonic mean and how do you differentiate between it and "milky"? And, oh gods, where does "butyric scent" come into all of this? Let's try to define some confusing perfume terms on Perfume Shrine once again. 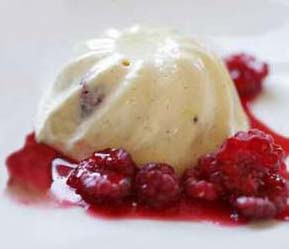 Creamy fragrances are more in reality more straight-forward than you'd expect: The term "creaminess" usually denotes a rich feeling, infused with silky, sensuous and lightly or more heavily sweet notes which may derive from soft vanilla, sandalwood, or coconut and sometimes from rich, lush florals that naturally have nectarous qualities, such as jasmine or honeysuckle. Vanilla in itself is usually described as creamy: Indeed Vanilla tahitensis pods have a complex odour profile, with notes of raisin, musk, cherry, lactones and anisic aldehydes.
Often tropical florals combine with coconut and coconut milk to produce that suntan lotion feel that we describe as "creamy". These would also fall under the umbrella of "exotic", as many people's vision of exotica is tan skin, dark almond shaped eyes and the scents that are exuded in meridians where leis are worn around the neck at all occasions. Delta jasmolactone exhibiting a coconut facet (and a creamy tuberose basenote as well) makes it a natural match for this sort of thing.
Fragrances of this type include Juste un Rêve by Patricia de Nicolai, Datura Noir by Serge Lutens, Champaca Absolute by Tom Ford Private Line, Gai Mattiolo Exotic Paradise LEI (coconut, vanilla and exotic flowers) and Jil Sander Sun Delight (with frangipani and vanilla). Ylang & Vanille in the Guerlain Aqua Allegoria line is a small gem of creamy floralcy: the naturally piercingly sweet scent of ylang is given a meringue treatment via fluffy vanilla and the eau de toilette concentration never allows it to become cloying or suffocating. Even the dicontinued Sensi by Armani was great in this game of uniting flowers with soft, tactile woods. 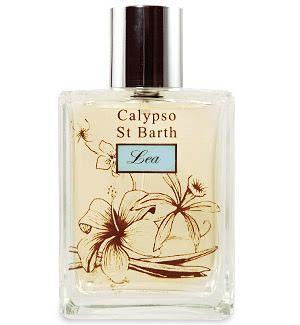 Almond fragrances when air-spun and given the dessert, gourmand treatment with lots of heliotropin, instead of the more medicinal bitter almond iterations (as in Hypnotic Poison by Dior), can fall under the "creamy, soft" spectrum as well: Try Heliotrope by Etro or the very friendly Cinema by Yves Saint Laurent. A popular choice in the genre is Comptoir Sud Pacifique's Vanille Amande. Their silky veil is soft, enveloping, tactile. When coupled with a lot of vanilla and some musk they can become almost a visible cloud around you, such as in Ava Luxe Love's True Bluish Light. On the same page, Lea by Calypso St.Barth is a cult choice and Sweet Oriental Dream by Montale (with its shades of loukhoum) is among the best in the niche line. Tilt the axis into woody-creamy and you get Sensuous by Lauder; a literal name for once.
An elegant version of this genre, holding the sugar at an optimum medium, is Eau Claire de Merveilles by Hermes; a more mainstream one Omnia by Bulgari. Men are not forgotten in this field: Pi by Givenchy and Rochas Man in the phallically siggestive rocket-bottle are great examples of creamy fragrances for men.

Among modern molecules, Methyl Laitone (patented by Givaudan, from "lait", French for milk) is a powerful aroma-material with a diffusive, milky, coconut-like coumarinic odour character. Its use as a milk note in soap formulae is now a given, but it also aids in providing a creamy scent to perfumes too. 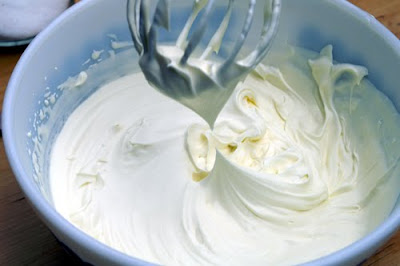 It's detabateable whether creamy and milky are the same, though: The difference isn't just a game for scholars. The condensed milk sweetness and "fattiness" of certain gourmand fragrances, such as the latest caramelic benjoin-rich Candy by Prada, can evoke visions of both clotted cream and milk desserts and rice-puddings, melding the two notions into one. Jo Malone utilizes the cozy, familiar note of condensed milk in black tea in her Tea Collection Sweet Milk. Kenzo Amour goes the way of a rice pudding: it's lighter than a pannacota, and has a steamy rice note in there too. Organza Indencence by Givenchy has a custard-like base, sprinkled with cinnamon, while Saffran Troublant by L'Artisan Parfumeur is like a milk dessert hued a vivid crocus-yellow by saffron served in bowls dressed in sturdy suede. Flora Bella by Lalique hides a milky facet under the soft, clean, fabric-softener violet core, while Etro's Etra is a milky floral as pretty and polite as this genre gets.
Sandalwood from the Mysore region in India in particular is famous for having a rich, satisfying milky scent. But smell a pure sandalwood-focused fragrance, such as Santal Blanc by Serge Lutens and see how a "milky scent" can be subtler, drier, less sugary than "creamy"; more opalescent than fatty glistening. Contrast now with a heavy bad-ass sandalwood perfume (boosted by powerful synthetic Polysantol), such as Samsara by Guerlain, and you are at a crossroads: that one's creamy rather than milky, va va voom sexy and enhanced by the richness of jasmine. Smell a virile, masculine sandalwood, ie. Santal 33 by Le Labo and you're back at square one; not a hint of cream in sight. No single ingredient can sattisfyingly give the full effect, obviously.

Take things too far on the dairy scales and you end up with "butyric". The word comes from the Greek for butter: βούτυρον/butyron. Usually butyric smells are due to either a single molecule (butyric acid) or, in the case of butyric esters, to part of a molecule. Butyric refers to a sharp cheesy scent, reminiscent of parmesan cheese (or even vomit and really stale, stinky socks; take your pick!), but some butyric esters, such as ethyl 2 methyl butyrate which has a fruity facet like pear or apples, are used in perfumery (and in the flavouring industry as well). And yet, and yet... irony has a place in perfumery; it's the buttery taste of tuberose-drama-queen Fracas by Piguet that makes it the unforgettable classic that it is! 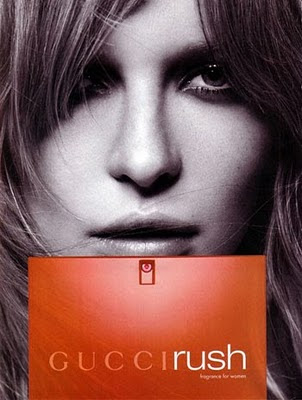 "Lactonic" however is specific perfumery jargon. It's not just a descriptor, hence I differentiate. (Though the feeling can read as "milky" or "creamy" too, as you can see further on!) Picture  lactonic as a subgroup of the greater milky/creamy continent, reached through specific vessels (called lactones).
Lactonic fragrances derive their name from Latin for milk (lac, hence lacto- etc.), and lactones are cyclic esters, a very specific chemical compound group, uniting an alcohol group and a carboxylic acid group in the same molecule. Therefore describing a fragrance as "lactonic" transcedes mere smell evocation and enters the spectre of analytic chemistry.

Why the confusing name, then?

Because they're produced via the dehydration of lactic acid, which occurs in...sour milk (and is found also in some dairy products such as yoghurt and kefir etc). You could begin to see the connection if you get the brilliantly synthetic Rush by Gucci, a lactonic modern chypre rich in a patchouli-vetiver-vanilla base and squint just so; a hint of sourness is its crowning glory. This is also the weird baby-vomit "note" in the iconoclastic Le Feu d'Issey (possibly accounting for the fragrance's commercial flop!).
Far from smelling sour, however, lactonic fragrances fall under 2 main schools, according to which of the most popular lactones they're using: milk lactone/cocolactone (i.e. 5,6-decenoic acid) or peach lactone. 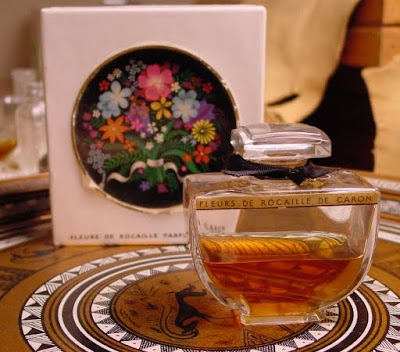 A classic example of the latter is Caron's Fleurs de Rocaille or Mitsouko by Guerlain; Mitsouko's infamous peach-skin heart note in particular is due to undecalactone (referred colloquially as "aldehyde C14"). Peach lactone can sometimes veer into coconut territory smell-wise, thus giving rise to "creamy" descriptors! Indeed gamma-nonalactone is the popular coconut additive in suntan lotion.
On the other hand, demethylmarmelo lactone has a milky, butter cake scent, as does delta decalactone which has facets of coconut.
Milk lactone or cocolactone has a silky, balsamic almost burnt butter odour which pairs exceedingly well with white flowers (jasmine, gardenia), as it is reminiscent of naturally occuring jasmolactones, hence its use in white floral blends. Dis-moi Mirroir, in the more esoteric Mirroir line by Thierry Mugler, is a characteristic example showcasing a white flower top (orange blossom) and a white floral heart (lily) plus peachy lactones (smelling of apricot and peach) flying over a milk lactone base, producing a milky-fruity floral.
Massoia lactone is an individual case, as it produces a note that is poised between woody and coconut; it is what will be featured in the upcoming Santal Massoia by Hermès in the more upmarket Hermessence line.

But not all lactones are created equal: the whole group of octathionolactones has a fungi smell, reminiscent of the refrigerated mushrooms aroma of some white flowers, such as gardenia and tuberose.These flowers also exhibit creamy facets side by side, so the whole issue of describing a fragrance is far more complex than expected; as with most things in life, it all depends on context and proportions!

Related reading on PerfumeShrine:
If you haven't caught on the Perfumery Definitions series till now, please visit: