The dream of a hug, the vivid bitter sweet memory of her perfume,
her hair shining golden in the morning sun, so fine,
the violets from the garden in her hand,
freshly picked with the dew pearls dropping one after the other,
the green May roses on the table, lasting forever.
It is a dream of days long gone, with a smile on my lips.

Miriam Eau de Parfum is the first fragrance on the Tableau de Parfums line (you have a chance of getting to know it before anyone else, read on!), referencing the heady, diffusive fragrances of the 1940s and 1950s.

Some people who admired Tauer perfumes had asked on these very pages some time ago that he composes an aldehydic floral. Apparently he listens! Miriam is an old-school rosy-green aldehydic floral, like they don't make them any more; perfumey, rosy, with piquant notes that register between soapiness and fizziness, an armour of glamorous "clean". You imagine a highly strung classy woman that hides her woes behind an immaculate veneer; perfectly coifed & manicured, wearing delightfully constructed, tailored clothes and maybe a string of pearls. Male filmmakers of the 1940s tended to show this powerwoman stereotype having a meltdown at some point in the plot, perhaps a subtle nod to "punishment" for undertaking more than they should. Pamela Robertson explains that Mildred Pierce exposes this contradiction of female success and societal expectations, "because Mildred's success conflicts with the postwar ideology that demands that women give up their careers" [1]. There are even modern specimens like Amy Archer in "The Hudsucker Proxy". But not in Pera's universe. Miriam can be complex, alternating between regret, love, compassion, duty, longing...she's very human.  In the words of Ann Magnuson, who plays Miriam in the film: "The character of Miriam is kind of riffing not only on the forties women’s picture characters but also some of the characters that I’ve played."

Who is Miriam? The host of a long running home shopping network program (“The Miriam Masterson Show”), Miriam (played by well-known actress Ann  Magnuson) is the on air confidante to millions of women across the country, But behind the scenes, Miriam is at odds with the men who run the studio, a motley crew of suits who don’t understand her touchy feely appeal. At home, she struggles with a layabout boyfriend. Her mother has just been put in a nursing home suffering from dementia. What Miriam would like more than anything is the one thing she can’t have: the name of her mother’s signature perfume. What’s left of the fragrance sits in an unlabeled Baccarat decant on the edge of Miriam’s vanity. When it’s gone, it will take a world of memories with it. Does it remind you of something? I thought so. That perfume therefore represents the memory of her mother, the fragrance her mother actually wore, but also the images and thoughts that Miriam projects into her perception of her mother as a younger woman. Makes for contemplating sniffing. 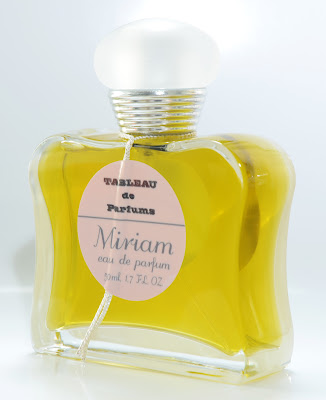 Miriam the fragrance is vintage in spirit but with a contemporary character. “There is something slightly provocative in this perfume,” says Andy Tauer, its creator. “It isn’t naughty, but bold. It makes a statement, and its wearer needs a little bit of daring. A grand perfume constructed in the tradition of French perfumery, Miriam is the kind of fragrance they don’t make much anymore.” Indeed! When was the last time you actually heard of a major company launching an aldehydic floral? This is one of the beauties of discovering artisanal perfumers: They eschew trends into producing what they like.
The scent of Miriam Eau de Parfum is immediately expansive, filling the room with its citrusy aldehydes burst and violet leaf natural essence (coming from Biolandes), making an instant euphoric impression. Unmistakeably this is an old school rosy floral, fanning the tea rose variety into a soft woody base rich in irones. The woodiness is half and half Australian and Mysore sandalwood, giving a smooth underlay. I hear there's also ambergris/Ambrox, one of the notes that Tauer likes and uses as insignia. It's subtle here and very low-hum (resulting in less than plutonium-like lasting power in this case), while there is a hint of animalic warmth deep down (civet?), taking a sensuous path for a brief while. But never fear; like the corresponding character Miriam EDP knows how to behave, even if her heart takes her elsewhere from time to time.

Miriam Eau de Parfum was inspired by the character played by Ann Magnuson in Woman's Picture series by director Brian Pera. (It even has its own Facebook page! Check it out!)

We are hosting a giveaway! One purse sized atomiser (7ml) to a lucky winner and 5 deluxe samples (1 ml each), with a DVD included, shipped directly by Tauer Perfumes into the entire world. Draw is open till September 7th and winner announced at the end of next week. Just leave a comment re: this post.

Miriam EDP will launch in early October in Los Angels at Scentbar and Luckyscent. Tauer will not make it available on the Tauer website, but rather on Evelyn Avenue.