If the Great Big Sea are to be taken literally, "you can smell that French perfume" on the wake of a contraband ship "if the wind turns right". In a world where everything has a received value besides its inherent one, Pilsener has to be Czech, computers should be USA-made, feta cheese must absolutely be Greek and perfume would be French (I suppose Absolut drinkers might get rallied up by now, but carry on please). The French have more or less cornered the market in what has to do with posh, sophisticated perfume (though there are wonderful specimens from all over the world, from the most unlikely places, such as Australia, Greece, or Germany). But how many actually know that "French type perfume" or "French style scent" is indeed very specific terminology to denote a specific olfactory experience, a certain scentscape if you will, a specific fragrance family even? And yet, like with many things in perfumery jargon (we insist that the nose is never wrong, it's the brain that muddles things up), it is so. 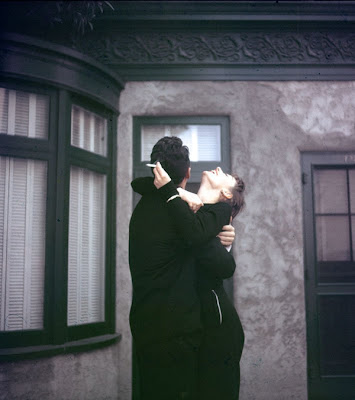 If we look back in magazine articles, perfume books and trade documents spanning the decades from the 1950s up to the end of the 1970s,  aldehydic perfumes are referred to as "modern type"or "french type". This was both due to the public's unfamiliarity with perfumery jargon (the industry was even more cryptical then) and due to a need for simplification for communicating the product to the consumer: modern or French denoted much more than a reference to chemistry (aldehydic fragrances are those which are characterised by a specific sequence of aliphatic aldehydes in their formula, scented molecules usually constructed in the lab). Especially since the emblematic torch-holder was Chanel No.5: both supremely "modern" for its times, the 1920s (thanks in part to the newly popularised bouquet of aldehydes) and quintessentially French as everyone knows.

But that's not all. In bibliography there was French type No 1 and French type No 2: the former a classic floral aldehydic, molded after Chanel No.5 and Arpège, the most famous surviving examples (others in the genre are Guerlain Liu and Guerlain Vega,  Piguet Baghari); the second was the chypre aldehydic perfume, of which Calèche is a prime candidate still circulating to this day (others include Mystère by Rochas and Paco Rabanne Calandre). Is it any wonder that even the perfume brand names are French sounding, replete with accents aigus and accents graves?

Technically speaking chypre perfume isn't particularly French of course, since it's an old formula/tradition that survived from the oldest cradle of perfume in the world: the Eastern Mediterranean, specifically the island of Cyprus. (Chypre is French for Cyprus, plus the best variety of cistus labdanum -an intergal material in the mix- grows in the East Mediterranean). But it did transport its effulgent magnificence to France thanks to a royal figure: Marie de Médicis (1575-1642), queen consort, lured by perfumes from Cyprus, the famous chyprés, then imported with a vengeance due to the opening of the Middle East route thanks to the Crusades, sent for her Florentine perfumer Tombarelli to come to Grasse, where the flowers were renowned, instructing him to capture their ambience in perfumed essences. From then on, a symbiosis of Greco-Franco roots produced this characteristic type of perfume we refer to as chypre. But what does it have to do with French type No.2? I'm getting there.

The chypre accord is pliable, though tightly structured, in that it can assimilate a selective bee harvest ingelements from diverse pools of scent: give it a twist with animalic or leathery notes and it almost creates a sub-category; sheen it with florals and it gets very close to the green floral (see Cristalle and Chanel No.19, on the cusp of the two classifications); inject it with woody-musky notes and you have nouveau chypres; and finally sprinkle with the waxy, lemony radiance of aldehydes and you have the aldehydic chypre, aka French Type No.2! The style was popularised through cheaper variants for the middle and lower market and through soaps (The soaps of the 1970s have nothing to do with the soaps of today; their olfactory profiles are miles apart, documenting evolving tastes and evolution in the functional fragrance industry. This is also why these French type perfumes are not considered "clean" any longer, as they used to, because the formulae for soaps and shower gels have heavily leaned towards "clean musks" and fruits in the last 20-25 years).

Today perfumes of this type smell "perfumy", i.e. "smelling like perfume", because this kind of formula is rare. People smelling a floral aldehydic or an aldehydic chypre fragrance invariably describe it in those terms; they also typify them as "dated/old fashioned" (general population), retro/old-school (fumeheads) or even "old lady scents" (people with no imagination and stuck up associations). In the general population smelling like perfume is a negative connotation on the whole due to the popularisation of the "not trying too hard" casual lifestyle image persisting. Even super synthetic accords devised for todays' market "fruit salads" (no fruit note is natural in perfumery, as fruits cannot be extracted) and fruitchoulis (such as Miss Dior Chérie or Angel and its progeny) are considered "natural-smelling" because they have been marketed as such. Additionaly, these scents have a mimicking methodology, whereupon they copy a natural smell via synthetic means, whereas the older "modern types" didn't copy a specific object but instead purposefully aimed for abstraction.

It's highly ironic that "the modern type" of as little far back as the 1970s has become the outdated type of the 2010s. But that's perfume fashions and perfumery terminology for you...

Pic of Audrey Hepburn smoking (and hugging Dean Martin). She was actually British with Dutch roots. I think I got it via Blogdorf Goodman's tweets, can't recall exactly.
*Share with link: Monday, February 20, 2012