“There is no lily oil or lily absolute,” says perfumer Mathilde Laurent, who wanted to introduce a floral scent in Cartier’s fragrance collection, a propos Baiser Volé, the jewellery brand's latest feminine fragrance launch. The name means "Stolen Kiss" reminiscing such romantic images as Fragonard's painting or Truffaut's film. “But I didn’t want it to be the 1,001st floral floriental, and I didn’t want to add a new floral composition.” Instead, Laurent likened wearing Baiser Volé to having on a necklace of lilies! 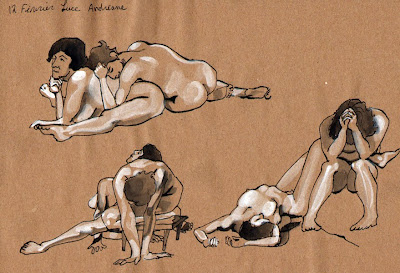 In Baiser Volé, in-house Cartier perfumer Mathilde Laurent explores the nature of lily three-ways (the leaves, the petals and the pistil) in a fresh powdery floral context and ends up with a surreal lily that isn't really about flowers, nor does it smell particularly spot-on "floral", but about the flowery nature of woman herself: opening up, "blooming", receiving, being at once pure and a little bit disorienting.

Laurent began by asking what smell men found enticing in a womanly way, to which the (fit to print, at least) prominent reply seemed to be "the lily". Colour me sceptical; isn't lily a symbol for purity and the need for cleansing? Maybe men are really leaning more onto the Madonna rather than the whore juxtaposition? Maybe they're asking them from a pre-arranged multiple-choice sheet?
At any rate, thus equiped, Laurent embarked on her 2-year long quest into fitting this stunning flower into a composition that would light up the room just lilies they do, without it being cliché, or surupy sweet, or headache-inducing cloying. If you are looking for the most realistic lily scent recreation, you might stop reading right now or read our article on Lily scent and lily flower types in perfumery; Baiser Volé doesn't even aim at that. But if you like fresh powdery scents, you might want to at least sample; it's very likeable.

The vegetal quality of the fragrance presents itself in an odd game of salicylates, solar notes which boom on the skin, a balance of bitter and sweet with a hint of citrus: The treatment, air-spun, meringue-like, delicate, is not unlike the one that perfumer Jean Claude Ellena reserved for the lightening up of vanilla through ylang ylang & lily notes in his fluffy Vanille Galante for the Hermessences. The vanilla and musks laced drydown in Baiser Volé recalls the sweetness of Un Lys by Serge Lutens, but the context is less poetic, more powdery, in a cosmetic-power-infused, slightly bittersweet way with a small subfacet of spice ~only minimal, a tad clovey; and a hint of violet ionones. It's safe to deduce that Baiser Volé transposes these niche sensibilities, pure, unadulterated exploration of perfumery raw materials's facets, in sleight-of-hand executions, into the mainstream. Compared with other lily fragrances, Baiser Volé stands alone and lacks the gaiac smokiness of real lilies which is reported to give them their "ham" brine-y facet. Cartier's interpretation is nowhere near the dense, ambery tinged radiant ambience of Donna Karan's Gold. Or the faux chypre structure of Ineke's Gilded Lily. Or the spicy corolla of Lily & Spice by Penhaligon's. And whereas Lys Mediterranée is a raspy, roughened salty-savoury lily that appeals to a certain Med sensibility with its hoarsey voice, while remaining irresolutely lily-like, Baiser Volé is smoother, more pliable, less floral, more traditionally womanly in its vanillic powdery kiss, and oddly at once old-fashioned and "clean".

On the other hand, and this is really interesting, Laurent takes no prisoners into embracing the latest trend of reinventing powdery florals for a generation that was afraid of anything powdery signifying "old lady perfume": From Esprit d'Oscar to Love,Chloé, the pink satin feel of ballerina shoes is taking on the sheen of flou through dusty, dry notes reminiscent of violets, talcum powder and sweet musks (if you're thinking of Lovely, by Sarah Jessica Parker, with an added dose of powderiness, you're not too far off); especially since this is a medium sillage fragrance, projecting politely while lasting power is good. Maybe it's code for "classy" or "different" in the milieu of hundreds of sweet things on the market. Maybe the generation who loved Flower by Kenzo and Cashmere Mist by Donna Karan have moved onto other things by now, leaving a void to be filled with new consuemers. The freshly powdery effect needs a true best-seller to shoot off as the new "craziness" in perfume (after "pink chypres" , fruitchoulis, and ethylmaltol-based ~aka cotton-candy smelling~ gourmands) and it remains to be seen just which fragrance that might be: Even though the concept and smell might be right for Cartier, I think we're dealing with a confusing name for Anglos: kissing the rodent seems to be many people's gut response, which might shoot the project in the foot (who can forget Rochas Poupée?). 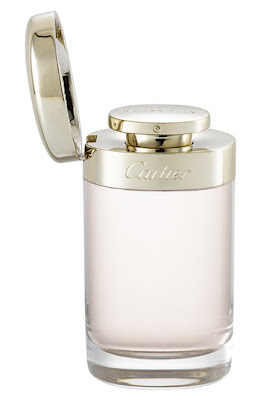 Mathilde Laurent has been at jewellers Cartier since 2005 and she had been busy concocting Les Heures du Parfum, a series of niche-smelling fragrances sold exclusively at Cartier boutiques. Baiser Volé is the brand's first major feminine fragrance launch since Le Baiser du Dragon oriental in 2003 (Cartier de Lune of early 2011 not withstanding) and contrasted with the best-selling masculine Déclaration, which garners more than 60% of all Cartier's fragrance sales, this Baiser is set to be a serious bet on the part of the company; a recent Women's Wear Daily article tagged it as being intended as the scent pillar in the brand's feminine portfolio.It's definitely geared towards "a younger consumer", though like Robin I am at a loss on just how old the Cartier demographic really is to begin with.

The bottle of Baiser Volé is based on a stylised lighter design, for which the house is famous: In the 1970s there was no chicer way to light up (even today Cartier-embossed cigarettes are still produced in a small quantity in Europe), giving rise to the Les Must de Cartier, a boutique line from which Must perfume arose. Cartier Baiser Volé is available in Eau de Parfum (priced between $75-$145), also presented in matching Shower Gel and Body Lotion ($55 each) and deo spray, and is currently a Nordstrom Anniversary exclusive, but it will be available at major department stores in September 2011.