Coco by Chanel must be among a handful of fragrances on the market to have not only one, but two flankers without being a spectacular market success to begin with. Flankers are supporting fragrances coat-tailing on the success of the original perfume, borrowing part of the name of the original as well as the bottle mould, but differing in scent and target demographics. Coco has two: Coco Mademoiselle, an alarmingly successful best-seller for youngish women that has far eclipsed the original, and Coco Noir, a woody fragrance of recent crop with dubious presence on the market as yet. Today Coco seems old fashioned and aimed only at mature women, fading-to-market-black, but soon after it came out it profited of a marketing campaign that positioned it as a sexy debutante scent, fronted by then teenager Vanessa Paradis! Funny how perceptions change and we used to wear Ungaro Diva and the like when not yet out of high school, right? 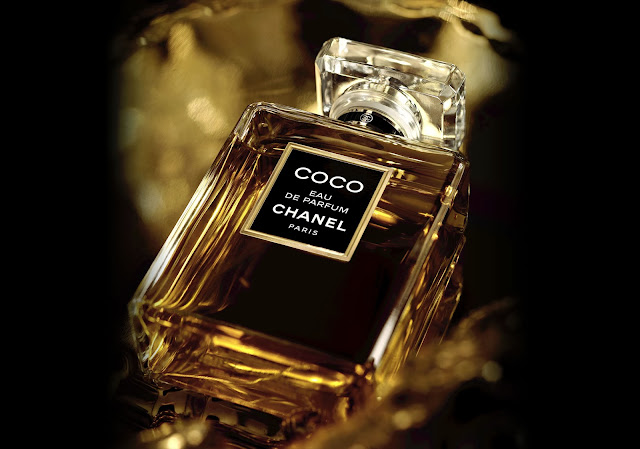 The most astounding personal association I have with Coco has always been one that pertains to its market share, not the scent itself: In all my many years of perfume observation & appreciation I have never met in real life a person owning a bottle of Coco, a fact which had always struck me as weird considering the continued presence of the perfume on the counters. Chanel No.19 is also an undivided presence on the local counters (and a steady seller according to SAs), but I actually know people who wear it, I smell it on the street from time to time and I have seen bathroom shelves with a bottle of it proudly displayed more than once or twice. Someone must be buying Coco too, then, right?
But let's take things at the top.

Aiming to capture a more Baroque side of Chanel, taking the sobriquet given to Gabrielle Chanel by her escapee father and inspired by Gabrielle's Rue Cambon apartment with its casket-like rooms full of Venetian glass, Chinoiserie panels and leather bound books, house perfumer Jacques Polge set out to compose a true 1980s perfume following the commercial smash hit of YSL Opium: bold, brash, take no prisoners. And he succeeded in the most part.

The fragrant secrets of Coco by Chanel
One of the peculiarities of Coco is that it was among the first perfumes to be conceived not as an extrait de parfum first but rather envisioned in its diluted form of eau de parfum. The market had gone away from the more discreet, more intimate use of parfum extrait and demanded a really powerful spray that would announced the wearer before she was seen; ergo the eau de parfum (and sometimes the parfum de toilette) concentration, less expensive than extrait but rivaling its lasting power, while at the same time being extra loud thanks to the volatility boost via the spraying mechanism.

The secret ingredient in the formula of Coco by Chanel is the inclusion of the base Prunol*, a rich and dark "dried fruits & spices" mélange famously exalted in Rochas Femme by Edmond Roudnitska, which gives Coco a burnished hint of raisin. The cascade of honeyed spices immediately asserts itself: pimento, cardamom, cinnamon, cumin and clove, while the overall feeling is one of amber plush and resinous warmth (with a wink of leather) with the flowers folded into a rich batter and undiscernable. The patchouli (tucked into the Prunol base) gives a whiff of chocolate, though, in the words of Susan Irvine, not even a fashion innovator of the magnitude of Chanel would have considered a note reminiscent of a bedtime drink as worthy of consideration in fine fragrance. (One would perversely wish she had lived through present fruitchouli-infested times to see how she'd chuckle under her smartly cuffed sleeve.)

A Perfume Apart
Coco by Chanel enjoys something of a revered status among perfumistas, so it's not clear whether it should be considered an "underrated perfume" in the first place, but my inclusion in the Underrated Perfume Day series isn't totally random as it would appear on first sight nevertheless. First of all it was demanded by quite a lot of readers. Secondly, this is the kind of perfume that I should be theoretically crazy about (a spicy oriental in the mold of my beloved YSL vintage Opium, Cinnabar, Feminité du Bois and Krizia Teatro alla Scala) and yet I am not. Indeed I have been trying it on and off for decades now.

However when married with a huge bottle of Coco (extrait de parfum in spray no less) I had the following peculiar problem, for something so -allegedly- admired: I could NOT swap it with other interested perfumephiles no matter what! I tried everything: stooping to suggesting I'd trade for inexpensive eaux de toilette from mainstream brands, offering to supplement with generous niche samples, pleading "please take it off my hands, it's a shame it should collect dust, just take it already". No one wanted it. I finally gifted it off to a women's shelter where its whereabouts have been lost to me. The perfume lover who had sold it to me in the first place recounted to me the exact same problem: "I spent two years trying to get this thing off my hands; when you came along and showed an interest I couldn't believe it".

Is Coco by Chanel something that perfumistas like to reference but rarely -if ever- wear? Are its wearers merely nostalgic for the 1980s, a time they were young and more optimistic, and therefore owning a little bottle is just that, a memento of carefree times? Is it, finally, past its due and not that spectacular to begin with? I think a bit of all those things. One thing however that it did magnificently well was its advertising by Jean Paul Goude: Vanessa Paradis as an exotic bird in a cage whistling to the meowing of a big greedy cat outside and "l' ésprit de Chanel" as the tag line. Coco Chanel would have been proud.

For more perfume reviews of such fragrances check out the Underrated Perfume Day feature and scroll for more musings.

*For modern takes on the Prunol type base in perfumes, look no further than Bottega Veneta eau de parfum, Chinatown by Bond no.9 and Mon Parfum Chéri by Camille (Annick Goutal).