Pensive garden, affectionate, fresh, and faithful,
where lilies, moon and swallow kiss.
Army on the march, child who dreams, woman in tears!

Adjectives like "astonishing" and "ravishing" may sound like hyperbole, yet it is enough for someone to have leaned once over an open, waxy petaled blossom of pure, gleamingly white and delicately flocked lilies to have stood transfixed. 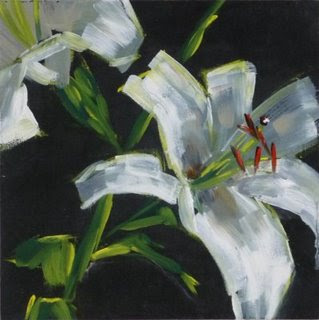 Words fail one upon the sight, while the nose is mesmerised by its oleaginous, yet at the same time spicy interlay of softness, sharpness and intense femininity. Even John Ruskin in his lectures “Sesame and Lilies” designates the second one, Lilies, to the treatment of women in literature and lore. An allusion which brings an added dubious sub-layer in the common reference of lily white skin in rapper songs ~such as the hilarious “Pretty Fly (for a white guy)" ~ by the Offspring) and in street parlance!

The beauty of lily is at once as pure and as sensuous as the face of Ingrid Bergman in "Casablanca"; its strong emition of scent in late summer makes an evening spent in a garden where it blooms an exercise in aching wonder faced with nature’s magic. And most astonishing of them all, among this plush, there raises its little head a small facet of horse stable manure (Luca Turin in a playful reminiscence while reviewing a lily fragrance refers to it as salami), enough to place lily in the category of the majestically strange, much like tuberose or jasmine. There's something awe-inspiring yet vulnerably tragic in the lily, like the Dresden-doll beauty of Vivien Leigh. 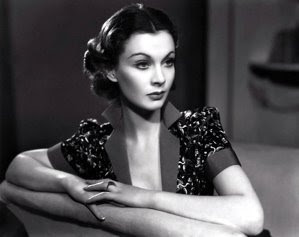 Lilies belong to the Liliaceae family, from which they take their name. The genus Lilium are herbaceous flowering plants growing from bulbs, comprising about 110 species with infinite visual variety. Lily of the Valley/Muguet (Convallaria majalis) on the other hand belongs to the Ruscaceae family (genus Convallaria), making them botanically unrelated to the former blossoms. Within the lily group there are several sub-varieties and contrary to the vernacular sayings equating lily with white, not all species are so. The following varieties are amongst the most prominent and beautiful: Columbia lily ,Tiger Lily , Easter/Madonna Lily ,the Goldband lily of Japan , the Amazon lily as well as the Stargazers, a popular and colourful subdivision of the Oriental lilies and the Casa Blanca Lilies (another Oriental hybrid).
On the other hand, the well-known Calla Lily (erroneously often misspelled as Cala) is not strictly a lily, since it belongs in the family Araceae. Generally Calla Lilies do not possess the characteristic heady odour of lilies nor do they have a potent odour profile in themselves, although the species Zantedeschia odorata possesses the strong scent of freesias. Vera Wang original perfume for women claims notes of Calla lily in its bridal bouquet. In perfumery, however, the lily par excellence is usually one in the Lilium family. And in this guide we will try to list fragrances which include the different varieties of lily.

Lost in history, the beautiful flower has even some interpreters of the Bible identify the Hebrew word Shoshannah as 'lily' in Song of Songs ("As the lily among thorns, so is my love among the daughters." Song of Songs 2:2 (KJV), instead of the customary translation as rose.
The heady odour of the flower is usually rendered through headspace technology or dynamic purge-and-trap headspace analysis, which reveals the main enantimomer as R-(-)-linalool, while the alluring strangeness of lily is closely tied to high levels of p-cresol accounting for its animalic tonality. [1]
The suave and sugary scent of Madona/Easter lilies which is all the more intense as the hours draw on towards the night is evident in the classic Anais Anais by Cacharel, in the more billowed aldehydic Dolce & Gabbana pour femme (the one which is crowned with a red cap), and the suave, lightly green and tender Un Lys by Serge Lutens underscored by snuggly vanilla, painting the picture of a Werner Herzog delicate heroine. The floral sweet touch also offers an unexpected marriage of opposites in Passage d’Enfer by L’artisan Parfumeur. The scent of incense and lily mesh through the ecclesiastical tradition, overwhelming my memory with liles offered during Easter whilst frankincense is being slowly burned on charcoals around.

Tiger lilies with their wild patterns are evoked in the equally jungle-inspired print (leopard) on the cylindrical bottles of the sadly discontinued feminine By by Dolce & Gabbana. The ginger overlay of some of the varieties of the lilies makes a perfect accompaniment to the coffee and sandalwood notes of the D&G fragrance. Inpendent perfumer Yosh has no less than three scents featuring tiger lily: Wanderlust (a fresh bouquet with a whiff of incense and patchouli), Tigresse (a fruity floral encompassing figs and pomegranates) and Ginger Ciao (the creaminess of coconut compliments the sweeter aspects of lilies and ylang ylang)! Reportedly Baby Phat Fabulosity and Lucky Number 6 also feature tiger lily as a note, although I have not personally tried either. The fresh, sea-spray-like and photorealistic undertake by Edouard Fléchier for Frédéric Malle’s Lys Méditerrannée (Mediterrannean lily) is one of the most elegant lilies on the market today, injecting a subtle gingery facet on a precious musky backdrop.

White and red Casa blanca lilies are evoked in the soft, non aggressive and diaphanous treatment of Des Lys, a soliflore in the Annick Goutal line. For her denser, hypnotic Grand Amour, the majestic lily is paired to sweet honeysuckle, the oily emerald hue of hyacinth and a host of eastern promises (myrrh, vanilla, musk). The woody-ambery aroma chemical Karanal presents some lily facets, reminiscent of the treatment of lily in such scents as the glorious Donna Karan Gold which explores the waxy facets of Casablanca lilies ~especially in the rich and excellent Eau de Parfum concentration. While the alpha-, beta- and gamma- terpineol are used to render clearer lily notes.
In Pleasures Intense by Estee Lauder, the abundance of green and sweeter lilies give off a contrasting image of sharpness and sweetness, highlighted by fresher peony on one end and benzoin on the other. One of the best oriental lily renditions in a mainstream fragrance was unfortunately an all too short-lived and now regretably elusive version of Pleasures, called Garden of Pleasures Moon Lily. A limited edition from 1999 in a trio collection which highlighted facets of the original best-selling Pleasures (the other two included Peony and Lilac), it presented a soft, orientalised and subtly sweet ambience of gigantic white liliums with intense red stamens protruding provocatively. 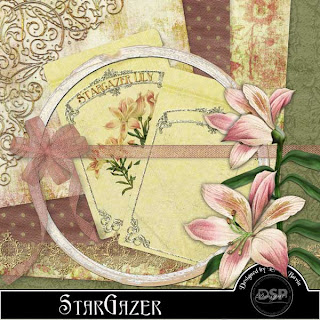 Oriental lilies and Stargazers seductively emit their fragrant indolic headiness, close to jasmine, in other best-selling fragrances such as the kitchy White Diamonds by Elizabeth Taylor and the suave Lily & Spice by Penhaligon’s.
Last but not least, in order to train your nose into the subtleties of the diferent varieties, Ava Luxe has composed a trio of lily scents with different effects: the simple and greenish Lily, the traditional Madona Lily and the more orientalised Stargazer.