In horror fiction phantoms are creatures who consume other life forms as sustenance, and are able to perfectly mimic any creature they consume. Déclaration by Cartier is perfumer's Jean Claude Ellena's own homage to a phantom's mental connotations and in its turn the propagator of legion of phantoms in modern perfumery. But like its namesake aviation F-4 counterpart (affectionately called "the rhinoceros", although its first proposed ~and quickly rejected~ names were Satan or Mithra) it has done everything in a stealth of silent power! 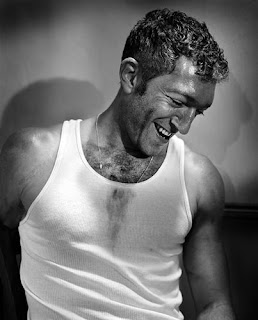 Largely unsung and not given the proper attention it so richly deserves, almost taken for granted, it is nothing short of an absolute masterpiece of fusing cutting-edge modernity into a classical aromatic cologne formula for men. Eau d'Hermès (a 1951 Edmond Roudnitska creation) has been haunting Jean Claude Ellena's subconsious for ages, it seems. Its fantastically ripe, "skanky" interweaving of cedar, cumin, birchwood and moss manages to provide snippets of Jean Claude's insignia in almost everything he touches, interpreted and sieved through the most minutiae-capable colander; in Déclaration we see the student at once pay homage to the teacher and further the cause in most confident and spiritual brushstrokes of a mature Sōsho calligraphy. So much so that Jean Claude himself has admitted a partiality to this one out of his scented progeny. But whereas Eau d'Hermès went for the leathery, Jean Claude opted for the dry woody, injecting a large dollop of woody synthetic Iso-E Super, a material with which he has been experimenting for years to impressive effect.

"Created for men, but also enjoyed by women, Cartier's Déclaration was created for those who are in love, have an appreciation of openness, and feel passion". The fragrance erupted on the scene in 1998 like the ripples of lava slowly coming down the mountain: it has since consumed everything in its trail, influencing major players in its aromatic wake and pre-empting the new sharp, dry woody masculines like Colonia Intensa for Aqua di Parma (also by Jean Claude Ellena), Cipresso di Toscana by Aqua di Parma, Gucci by Gucci, John Varvatos Vintage and the newest niche masculine by Ormonde Jayne, Zizan; fragrances which gracefully followed the dearth of marines inaugurated by Bourdon's Cool Water two decades ago. And not a moment too soon!
My own personal encounter with it was buying it for myself upon launch, lured by the sexily fresh-sweat-vibe it exuded and then having my other half smelling it on me, usurping it most decisively, claiming it and making it his own ever since, to the most delicious effects which are better left to the reader's fertile imagination. It makes him feel refreshed , as if he's seeing the dawn for the first time opening windows which give on a view of the autumn forest, he says. Needless to say Déclaration occupies a very special segment of my olfactory cortex!

My friend Dane described it in a conversation as "a taxi driver in a forest" the other day and he couldn't be more accurate. If he had likened Déclaration to chantey, that would be close as well: The sweaty side married to the freshness of open horizons, all obeying a rhythmical discipline that engulfs you. The marriage of lucid clarity and sous-bois depth prove its masterful treatment of contrasting elements.
The jolting cumin opening is often feared as coming across as sweaty and indeed this is no scent for Waspy brokers who want to exude the prolonged latheriness of a morning shower-blast topped with a hundred grooming products à la Bret Easton Ellis heroes. On the contrary, this is very à la française, a scent for men the old style. Not caricatures of manufactured virility, you comprehend, but men who breathe and live and wear T-shits or wife-beater vests with a little humidity on their chest hair; a little overbearing or even narcissitic at times but passionate and sincere nonetheless. The idiosyncratic bitter citrusy elements (bergamot and bitter orange) and the green artemisia recall the comparable treatment Ellena reserved for his lustruous bitter-orange and limes themed Cologne Bigarade and Bigarade Concentrée for the Frédéric Malle line. But the real coup de grace comes in the guise of another exotic spice, cardamom, which makes me envision a slightly cocky chap in pressed chinos enjoying his aromatized inky tea taken in long, sensuous sips while checking the atractive passerbys. 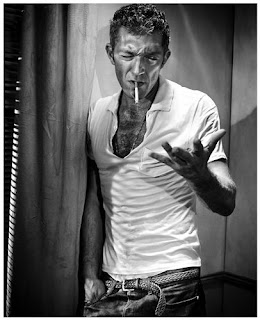 This is Ellena's nod to Bulgari's tea-themed creations he authored previously, Eau Parfumée au Thé Vert (1992) and Eau Parfumée au Thé Vert Extrême (1996). What is left is the ambience of a lasting warmth, not rendered easily by laundry musks but fanned out on dry, luxurious, slightly smoky woods, which manage to not obscure the composition but play upon light and shadow like a black & white photograph of a compelling and charismatic French actor.

The bottle reprises the watch mechanism of Cartier watches' winding section with its cap (You have to pull the little metal holder down to let the sprayer free, just like releasing the security of a watch winder). The glass part looks as if two parts of a whole have been cut and re-assembled at an angle creating a small heart on the shoulders if looked from above, which gives a playful and even eerily girly vibe (and which bodes well with the unisex concept). 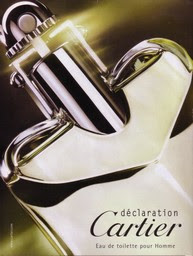 Déclaration by Cartier is available at major department stores around the world.

Two flankers exist, both created by Jean Claude Ellena: L'essence de Déclaration (2001), a minimally different version on the original with the addition of rosewood, immortelle, a little amber and a lightening up of the slightly medicinal aspects of the original, encased in the same design bottle in teal glass; and Déclaration Bois Bleu (limited edition in 2001), which is a "fresher" interpretation in a light blue bottle (which to me is usually foreboding of "sporty" things for people not into sports, really). For the latter Chandler Burr commented: "This one is PG-13, but that simply means the cuminic body odor is gone (some will miss it; more will not). Its personality has been smoothed and calmed and de-Frenchified". Personally I'd rather have the original, as I feel the aquatic addition skews it in a direction I am not sure I'd want to stalk.
There is also Déclaration Eau Genereuse (a Limited edition from 2003), of which "generous water" the concept of is reportedly a re-working in Eau de Cologne style.
Cartier went on and produced Roadster for men recently. Which is pretty nice, but no match for the strange allure of Déclaration, despite aiming at roughly the same demographic.