Defining Powdery and Dry in Fragrances

"Perfume is subjective", I hear all the time. What's heavy to one is light to another, what is pleasantly sweet to certain individuals can be overly sweet. Probably because we haven't really agreed on which terms to apply so that we have a codified language to describe scents. True, we use "fragrance families" taxonomy to distinguish them (floral, woody, chypre, aldehydic, leather etc.) and sometimes we borrow from taste (sweet, bitter, savoury/salty, sour) but what happens with more esoteric terms, like "powdery" scents or "dry" ones? 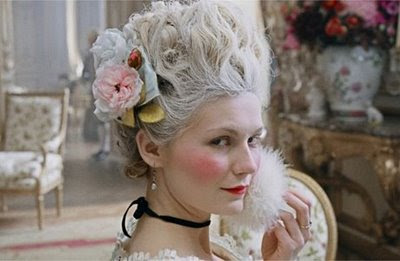 Google search "powdery dry perfume" and you will see in the top five results the mention of Guerlain's Chamade. Now, Chamade isn't particularly "dry" nor is it particularly "powdery" except in the end. I mean, sure, one could detect these nuances to some degree, but my mind would gush forth hundreds of other suggestions for fragrances before mentioning Chamade. Unless we're thinking of the slang term "dry powder" for cash reserves for an unforeseen difficulty, in which case, yes, Chamade is a great asset in the war against industry mediocrity. But I digress.
So let's break down the terms, starting with "dry" since it's the more inclusive one.

"Dry" is a term that can denote two things in English: the opposite of sweet (as in wines) and the opposite of humid (Just like "light" can mean the opposite of both heavy and dark). In the latter sense, it's easier to grasp the context: Dry fragrances don't have dewy, watery, acqueous elements that recall crisp vegetation, any expanse of water or dew drops on petals. They can be mineral-like and they keep you dry as a result. Think of woody scents full of cedar, sandalwood, oak, rosewood, birch... Like the trunks of trees and their barks, they have a solid "appearence" to the nose. Think of smoke and some kinds of incense.

The opposite of non-sweet when refering to "dry" fragrances is a little more elaborate to explain. Think of a fine dry wine which has a minimal residual of sugars. Taste a fine white Reisling and compare with a full-bodied Sherry. And later on, within those categories, try to detect the degrees of dryness or sweetness between a Fino and an Oloroso Seco. Tannic notes give a taste of dryness which bites the tongue (in a non-spicy way). 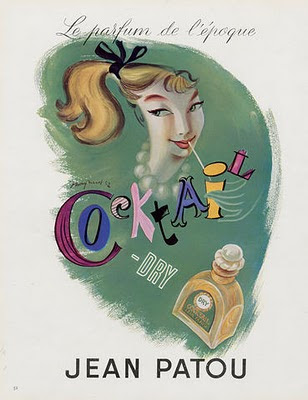 Same goes for fragrances: In his couture shop at 7, rue Saint-Florentin, couturier Jean Patou had the brilliant idea of creating a cocktail bar where men could drink and small-talk while their women shopped for their dresses. In 1930, Patou decided that this could be converted into a veritable perfume bar and Henri Alméas, his perfumer, was instructed to create "cocktail" fragrances: The results were the original Cocktail, Cocktail Dry, Cocktail Sweet, and Cocktail Bitter Sweet. Clear enough?
It's not accidental that most masculine fragrances aim at "dry"; it denotes a certain butch element! Dry notes in fragrances are usually provided by woods or some grasses (for instance vetiver), by rhizomes (orris/iris), by phenols (tar-like essences such as birch tar, guiacwood, leathery compounds), by mosses (oakmoss, treemoss). There is no restriction as to which family they might belong to, though: Try the oriental Tiempe Passate by Antonia's Flower, the chypre Aromatics Elixir by Clinique, the woody floral Ivoire by Balmain, Chanel's green floral No.19, the aldehydic Pure White Linen by Lauder, the mineral cologne Eau de Gentiane Blanche: They're all non sweet, non humid, they will keep you dry on a warm summer's day.

And powdery, you ask? What does it signify when talking about fine fragrance? "Powdery" can be a subcategory of "dry", as powder by its very nature abhors moisture. Yet powdery can take sweeter nuances or drier ones, according to manipulation by a talented perfumer. It also hints at a feminine rather than a traditionally masculine smell, evoking as it does a million "cute" acoutrements: feather boas, white kitten fur, cosmetic enhancements and 18th century peruques, pastry making involving flour, and fluffy angora sweaters in pastel colours. Usually the categorisation is between "face powder" or "talcum powder" (also described as "baby-powder"). Face powder notes are more refined in feel and overall less sweet with a vintage, "perfume-y" trail, while talcum powder is simpler, usually involving a comforting, vanillic backdrop that recalls the famous lemon--lavender-vanilla accord of Johnson's Baby Powder. The no doubt amusing dichotomy of powder evoking both grandmothers (through the association with the scents they carried on from their youth) and babies is probably fodder for a psychology thesis on how smell perception is the most perverse within the human brain function. For the scope of our column, let's give some examples to clarify our point.
Face-powder-smelling fragrances include Hermès 24 Faubourg, Ombre Rose by Jean-Charles Brosseau, No.19 by Chanel, Patou's discontinued Normandie, Creed Fleurs de Bulgarie, Jolie Madame by Balmain, Coriandre by Jean Couturier and Ma Griffe by Carven. Talcum or baby-powdery fragrances have an artistically acclaimed representative in Petits et Mamans by Bulgari, a cuddly powdery scent which truly charms. Cashmere Mist by Donna Karan and Flower by Kenzo are the rather grown-up version, aromatized with a little jasmine for the former and a clearly detectable synth violet for the latter. Try Teint de Neige by Lorenzo Villoressi: choke-full of powder! Surely a firm favourite of power loving folks!
US brand Philosophy was fully cognisant, when they composed Baby Grace, that Americans have fond memories of having their baby bottoms talcumed with Johnson's. And there's of course Baby Powder by Demeter for nostalgisers on a budget; or those who want it clearly spelled on the label...

We had talked about ambery fragrances which often evoke a powdery effect the other day, some of the ingredients involved into giving such an ambience being amber mixtures, opoponax gum (such as in the case of Shalimar), heliotropin, vanilla and several musks (try Habanita by Molinard, Must de Cartier in pure parfum, Kenzo Amour or Obsession by Calvin Klein to see this. And see how white musks can be powdery soft in Clair de Musc by Lutens). 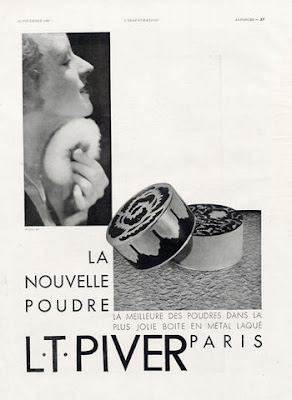 But powderiness can be also rendered through orris/iris (Iris Poudre even says so in the name), certain aldehydes (read more on which on this article), Iso-E Super when combined with certain musks and most importantly mosses (like in Aromatics Elixir, Ma Griffe, Chanel No.19, Knowing by Lauder, Coriandre, and Piguet's Bandit).

Moss contributing to the effect is an interesting case of chance discovery. I was puzzling myself for years trying to figure out why moss reminds me of my mother and of face powder. I am not alone, lots of women associate it specifically with vintage poudre de riz face-powders imagining them being slowly, decadently, glamorously fluffed on with ostrich-feather puffs by film noir heroines before they go out to wreck havoc on some poor men's lives. Powders from Cyprus I knew were based on the famous "recipe" of chypre perfumes. Until one day strolling the Max Factor counter I stopped to read the actual ingedients on a couple of compacts, one of them being Creme Puff which both my mother and grandmother used with a wide brush for setting their makeup. Yup, prominently displayed was Evernia prunastri, otherwise known as...oakmoss!

Which are your favourite dry &/or powdery fragrances?