As improbable as some comparisons seem, like say contrasting a beaming, shinning Mercedes KLC to a tiny compact Smart, sometimes they hit the nail on the head: both cars are made by the same makers. There are of course countless details that separate them, but they are equally attended to for standards of quality.
Which brings us to our improbable theme today: The augustus scent of Iris Poudre by Editions de Parfums Frédéric Malle side by side to the lowly and humble Ulric de Varens Pour Elle.

Iris Poudre needs no introduction, really. Although I haven't reviewed it in full yet, it is probably my favourite within the confines of this much esteemed niche brand that caters to the tastes of perfumephiles and perfumers both: The former because they can sample the vision of some of the best noses of our days with trully good ingredients. The latter because they are at last given free reign to do what they had always wanted to do but couldn't, due to commercial restrictions. 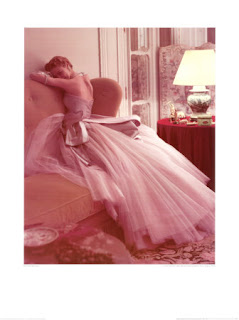 Iris Poudre was created by Pierre Bourdon, one of the finest noses in the field. Frédéric Malle professes that "if it were a garment, it would be a cashmere sweater - classic but personal, appropriate for most occasions, something one never tires of". Although touted to be a grand floral aldehydic, to me it has no distinct relation to aldehydic fragrances that people perceive as typical of their classification, such as Chanel No.5, Madame Rochas or Arpège. It is subtler and less sparkly, more powdery. However it does have touches of the cool allure and rosiness of Rive Gauche or Calandre, both scents with a beautiful coolness contrasted with a little warmth in the base. Iris Poudre utilises the caramel butteriness of tonka bean, the cosiness of musks and just a hint of fluffy vanilla to instill that faint warmth that surrounds you like a precious pashmina on a chilly evening on a walk back from the theatre or an art exhibit.

Ulric de Varens is a french brand founded in 1982 that features in the mainstream and lower end of distribution, appearing in what the Americans call "the drugstore". Apart from the eponymous line, they also produce the Lily Prune line and the Jacques de Saint Prez line. And yet their offerings are often surprisingly good: their Patchouli Chic was one of the better scents to feature that note by popular vote, their Sublime Vanille and also their Ulric Fun are composed by none other than Jean Claude Ellena, their UDV Men is composed by Maurice Roucel. Coincidentally two of the bright stars in the gallaxy of F.Malle. You get the drift...

Ulric de Varens Pour Elle also known as UDV, came out in 1999. It is a delicate, powdery floral with the merest hint of woody sweetness in the base. According to the official press release:

Pour Elle contains pear, finely supported by the king accord of Rose, Jasmine and Lily of the Valley, with a layer of sensual, bewitching white musks which open up thanks to precious woods and sweet scents of Vanilla.

Although it is advertised as a fruity, musky floral, to my nose there is no really discernible fruity element and the predominent impression is that of the smooth powdery accord of iris. The impression is quite realistic. Which in itself might be a good indicator of what is an industry secret: that lots of perfumes that claim iris notes construct the acccord with synthetic molecules and not the dearly costly rhizomes of the Florentine variety.
There is really no discernible rose or jasmine per se, but rather the hazy impression of a floral bouquet dusted with air-spun powder and a little icing sugar. It smells ivory, betraying the pink shade of the juice itself. There is a soft, caressing, cosy quality about the musks used and a little woodiness. The whole is very feminine and smells much more expensive than anticipated. Contrasted to Iris Poudre it shares much in the beginning stage, when both diffuse with little puffs of liquid snow. It then warms up, somewhat more pronounced than Iris Poudre and with a sweeter drydown phase which is perhaps its shortcoming side by side with the aristocratic dryness of the Malle fragrance. The latter is simply rootier, earthier, with a slight nod to Iris Silver Mist by Lutens or Hiris by Hermès. 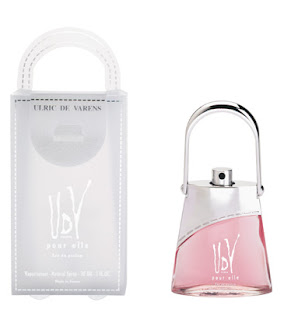 UDV’s whimsical and rather kitchy little purse bottle (the spray is atop the upper part of the "bag" part) in a horrible plastic case might have better served a teenager's budding boudoir rather than my more somber vaults, but it will have to pass. As it is, it is an indulgence one can spray with abandon and toss with no regrets when it eventually spoils.

Addition:
Ferre by Ferre is another fragrance that I got round smelling prompted by my readers and found out that it has numerous similarities to Iris Poudre, indeed: in fact this is not so strange, as they were both created by the same perfumer, the great Pierre Bourdon. They do smell almost identical, if you lean a little on both, with perhaps the possible exception that Iris Poudre has a slightly more metallic finish in its development that is more distinctive and a little aloof, with an aldehydic tinge perceptible. The lasting power is comparable.
However, for those of you who cannot get Iris Poudre easily, Ferre by Ferre is a great alternative and with a much more respectable-looking, architectural bottle than UDV pour Elle .