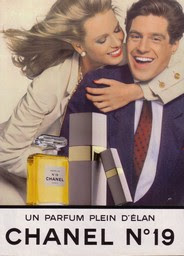 Two sisters cut from the same cloth, but parting ways in their pursuit of self-fulfilment is not an uncommon scenario in real life, but when it happens to fragrances the comparison warrants exploration. A beautiful icy queen in contrapuncto to a bohemian lady of pedigree is how these two seem.

In Chanel No.19 I find every bit of that confident self-assurance that few women project without appearing displeasingly haughty. Composed by Henri Robert in 1971 for Coco Chanel herself, who supposedly overlook its creation from start to finish and first commissioned it for herself while in her 80s, it's one of the compelling masterpieces of perfumery and I personally love it dearly.
A very cool and powdery iris sings in soprano voice above the greenest vetiver and crunchiest galbanum this side of pre-reformulation Vent Vert; green jasmine vine dew and a little wood and leather give it aloof sophistication. It wears equally well on a hot day or a cool rainy one and this is an admirable trait, making it a perfect spring choice. Poised between green floral and green chypre, to me it definitely leans to the latter, a very elegant and confident one at that, that does not demand dressy clothes but could be just as fetching with something more casual. I picture it with a crisp white shirt on and silver bangles on a warm day, hair down; carefree and free-spirited and a little audacious to contrast with its primness of character. It would be a grave mistake to pair it with twin sets and pearls, all the paraphernalia of prim and proper, subtracting from its strict-boss sexiness.

The three concentrations are quite different from one another and thus worth comparing.
The Eau de Toilette comes in a refillable spray bottle, same as the classic No.5 but in silvery brushed aluminum instead of black; or a flat oblong spray bottle with a rectangular black or silver cap. The Eau de Parfum comes in the classic flat Chanel bottle with curved edges, with a spraying mechanism, just like No.5 in Eau de Parfum. Parfum is of course encased in the loveliest flacon of the three, with the excellent craftmanship reserved for the top products of the line.
Each of them hides a different aromatic secret: Eau de Toilette is the sharpest, dewiest and startingly greenest of the three, an affair of iris and vetiver in a naughty tryst after the executive power breakfast.
On the other hand Eau de Parfum, a creation of the 80s, highlights the crystalline Rose de Mai, along with jasmine, appearing more amply floral and curvaceously richer, justifying the green floral categorisation. Parfum is closer to Eau de Toilette, with a subtler projection however, the green whisper of violet leaves and vetiver embracing the coolness and powderiness of iris. The hint of undergrowth via oakmoss is also a bit more pronounced, which might signal the toll of death for the precious formula in light of IFRA and EU restrictions in the near future (let's hope not!)

Myself I have a preference for the translucent, icy clarity of the Eau de Toilette. In fact I am perfectly satisfied with it to the point I don't feel the need for parfum in this one, unless one is concerned with sharpness and projection.
The Eau de Parfum has a tendency towards turning sour on me, adding to my frustration with rosy accents that I am forever trying to come to terms with. But for rose lovers, this is the concentration to go after.
There are also two distinct formulae on this one, as attested by two differently hued bottles in the same store, which were of slightly different batches: one more emerald green, another more yellowish. Light or time deterioration could not be the culprit for the difference, as the first pigments to deteriorate are blue-toned ones, then red, then yellow, much like it happens with wines (a purple or green hue in red and white wine respectively -both shades containing a bit of blue in them- is a sure sign of a fresh batch and not an aged vintage).
There is discussion of reformulation, which is especially poignant regarding parfum, if so. The Parfum flacons I have come across do not present shade differences (yet) and are uniformely an ambery colour juice, but this is not to indicate that it will not follow the other concentrations in the future. 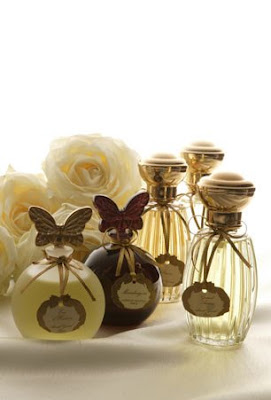 Heure Exquise by Annick Goutal means "exquisite hour" and refers of course to what Guerlain poetically called l'heure bleue: the moment when the sun has set, but the night sky has not yet found its stars.
There is a wonderful poem by Paul Verlaine titled "La lune blanche"/"White Moon" which uses the very phrase in the end and it would be magnificent to think that it might have served as an inspiration:

"The white moon shines in the woods.
From each branch springs a voice
beneath the arbor.
Oh my beloved...

Like a deep mirror, the pond reflects
the silhouette of the black willow
where the wind weeps.
Let us dream! It is the hour...

A vast and tender calm seems to descend
from a sky made iridescent by the moon.
It is the exquisite hour!"

~Translation from the French by Grant A. Lewis (indiana.edu), referenced through this link with a comparison with the French text.

According to Michael Edwards, if you like Hermès Hiris or Chanel No.19 (both boasting a hefty amount of iris and in fact sharing a similar skeleton of perfume structure with Heure) you will like Heure Exquise. And in this case the correlation is eminently apparent!
Composed by Annick Goutal and Henri Sorsana (her perfumery mentor) in 1984, at a time when such cool and shady compositions were not the norm, it departs with its soapy iris note.
Goutal pegs it as:


"A sophisticated trail of Turkish rose, a gentle powdery base of iris from Florence and Mysore sandalwood. This fragrance recreates the atmosphere of a rose garden that blossoms with the passing of each exquisite hour."

Heure Exquise is a gentler, less astrigent sister of Chanel No.19, drier even and more powdery, with a more romantic, presque bohème streak due to its animalic submantle. Despite it being a newer creation than the Chanel it posseses an Art Deco vibe that is more old-fashioned than No.19.
Ravishing green pepperiness of galbanum provides the arresting first impression while the mysterious mists of iris with its powdery note enforces the similarity. Rose blossoms emitting their aroma in a dusky garden peak through in true feminine form.
However on closer inspection there is an almost incense-like feel of woody resiny aroma which contributes to the sui generis character of the whole. A subtle vanillic hint plays hide and seek in the woody base, never sweet. The progression does not change much on a blotter or on the skin and the tenacity and sillage are a bit more subdued than No.19. It is less cooly composed, less correct in its demeanour, with hair slightly out of place perhaps and clothes that might defy the rules of ineffable chic, but more spontaneous and passionate as a result.

The comparison between the two fragrances reminds me of the two sisters in the film The Heart of Me, based on the novel by Rosamond Lehmann. Set in 1930s London, it features two sisters - Madeleine and Dinah, played by Olivia Williams and Helena Bonham Carter respectively - and their contrasting characters: one marries Rickie (Paul Bettany), a debonair City businessman; the other falls in love with him. He begins an affair which is to have repercussions throughout their lives.
To feel the differences between the two sisters, you can watch the trailer, clicking here.

Heure Exquise like Dinah "might not be the most elegant creature, but it has passion". If No.19 becomes seriously compromised it is an excellent alternative and a wonderful stand alone perfume in any case.