Some women float over the floor rather than walk on it. There's a sweeping elegance and drama about them that you almost think all motion stops when they pass under the doorframe. Cialenga by Balenciaga is like that: Classically beautiful, aloofly superior, it's arresting and mysterious, but never going for outright wiles of seduction. This isn't a hearty blonde to laught out loud at your joke, but an icy cool Hitchockian heroine. Possibly with thick arched brows and a grey suit, besides a shady past, to show. Don't let the smile fool you... 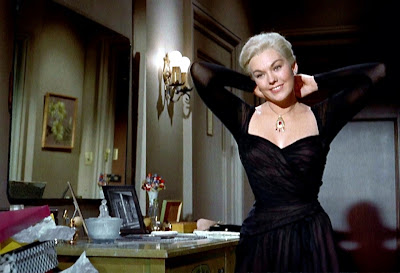 History
Cialenga was launched by Balenciaga in 1973, composed by perfumer Jacques Jantzen. The name is rather cryptic; his only other known credential is collaboration on another Balenciaga perfume, Ho Hang for men (1971). But his history spans decades of shrouded work: His is Helena Rubinstein's 1946 Command Performance.
The green chypres with floral hearts signified a more assertive and sophisticated angularity than the curvier lactonic florals of the 1950s and early 1960s and ushered in the new woman, the one who worked, took the pill and wore the pants. The dry, somewhat acrid quality of this genre is expressed in a dark manner in Cialenga, manifesting itself as among the more noir of the lot with a balance of green, spice and wood, just like a well judged cocktail of Martini wits, kinky sex references and sharply-cut tailleurs.

Comparison with Other Fragrances & Scent Description
The most apt comparison of Cialenga with any well-known perfume would be with vintage No.19 by Chanel. The way No.19 used to be, before being somewhat declawed. In Cialenga the green harmony is more aldehydic (recalling that segment from Paco Rabanne's Calandre) and soapy, while the overall character is decidely mustier than the Chanel and with quite a bit of spice added (clove and coriander prominently to my nose). The jasmine takes on a nuance between creamy and soapy, with no sugar floralcy as in more familiar sketches of floral chypres; the aldehydes do not take center stage.
The angularity of the green notes recalls the top note of Vent Vert in the vintage parfum (so full of galbanum), while the spicy warmth with an added myrrh tonality is all dark corners of a Spanish monastery in the New World and dangerous brunettes turned blondes with a death wish.

The familiar sophisticated refinement of Balenciaga perfumes (I'm referring to the vintages, though the modern Balenciaga Paris and L'Essence aren't half bad) is there all right in Cialenga. Think of Michelle, that ultra aloof tuberose parfum by the same Spanish designer or La Fuite des Heures! Being highly in tune with its times, Cialenga vaguely recalls other fragrances in the genre of a similar retro time-frame: Y by Yves Saint Laurent, Coriandre by Jean Couturier, the first Jean Louis Scherrer. The citrusy and black-currant segment might even recall the refreshing facets of Amazone. 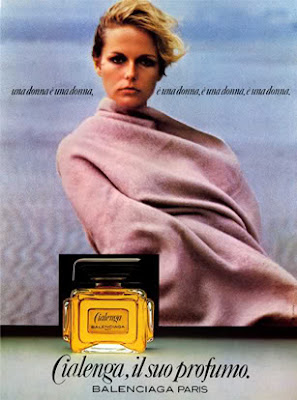 A little goes a long way and it's trailing at least down the elevator doors, so a small quantity should last you a long time; good thing, as Cialegna, like all vintage Balenciaga perfumes, is discontinued and nowadays quite rare.  Few specimens crop up on ebay from time to time.

This review is dedicated to Armani/Michael who introduced me to this fragrance and who had a thing for Kim Novak's brows in Vertigo :-)
*Share with link: Tuesday, January 03, 2012