It is always with some astonishment that I find myself in a Wells-like universe while critically appraising fragrances from decades ago: the Balenciaga classic perfumes opus in particular is supremely refined in the grand manner (Quadrille, Prelude, Cialenga, and the more famous Le Dix), yet surprises lay hidden in less far off decades ~as recently as 1979, if 30 years ago can be seen as "recent". Michelle, created that year, as a posthumous homage to the great couturier who had died in 1972 and named after his favourite model, is a classic from the house reflecting values of another time. 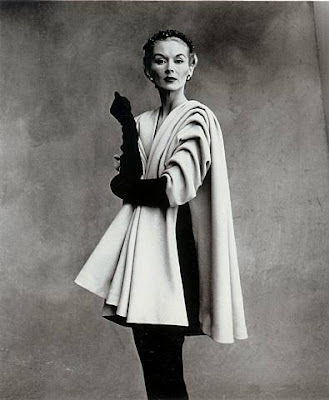 Intense in its message, floral and oriental at once with a wink of aldehydes on top like topz eyes behind dark sunglasses, and weird in a sublime way, thanks to a ginormous tuberose and earthy rose in its heart, Michelle by Balenciaga shares a common element with that other fangled, musky and bitter tuberose of the 80s, Dior's Poison by nose Edouard Fléchier (1985); and to a lesser degree with the more vulgar Giorgio by Giorgio Beverly Hills, a fragrance that sadly traumatised a whole generation of teenagers into succumbing to watery ozonics in the hopes of escaping the deadly, miasma-like fumes of their mothers' scent which wafted from every taxi and every elevator to the point of suffocation.
As someone wittingly quipped, the first Dior Poison is "like road testing an Abrams M1 tank in the evening rush hour". To further that image, I should add that Giorgio is all of the above, but done in picturesque Dubrovnik, pre- the Yugoslavian War ravages, when it was a perfect specimen of UNESCO's Cultural Heritage collection of cities, pristinely preserved in formaldehyde.

Cristóbal Balenciaga (1895-1972), a Basque-born Spanish couturier renowned for his impecable attention to detail, his contempt for bourgeoisie status of the Chambre and referred to as "the master of us all" by Christian Dior himself, became famous for his architectural eye and ultra-modernity. The latter was especially exhibited in his "bubble skirts" and odd shapes, the "square coat", the swanlike collars and the "bracelet sleeves" among them. His fragrances reflected his demanding and sophisticated nature: they had character!

The nose behind Balecianga's Michelle is Françoise Caron, best known for Eau d'Orange Verte for Hermès, Kenzo by Kenzo (the original with the blossom-shaped stopper) and the reconstruction of Ombre Rose L'Original for Brosseau, but also for Montana's oriental mohair blanket Just Me and the popular oriental/gourmand Escada Collection. Her Gió for Giorgio Armani (1992) continues with the tuberose treatment so prevalent in the 80s and in a way reflects some of the aspects of Michelle without following it closely. Whereas Gió is nectarous, fruity and honeyed, Michelle is rather sharper, mossier and with that weird perfume-y note de tête which is commonly referred to in perfumephiliac parlance as the "bug spray accord". Both Poison in its foreboding purplish bottle and Giorgio in its yellow-striped kitsch shared this bug spray note: an aroma which had become so popular through the extensive usage of the above perfumes back then that manufacturers of instecticides in a reverse compliment (cheapening the formula) replicated in their...yes, you guessed it, bug sprays! The mental pathway wasn't difficult to lay and forever since bug spray ~and the perfumes that echo it~ have that characteristic sharp, needles-up-the-nose, bitter and strangely floral-from-outer-space tonality which has its fans and its detractors. The mental association isn't a personal favourite for reasons of overdosing on insecticides one memorable tropically-latituded summer in Bali many years ago, so although I admire that kind of fragrances intellectually it isn't something I am comfortable with wearing too often. Still in Michelle that bug spray accord is tempered and tamer, making it friendlier.

If by mentioning tuberose you cast your mind to the timeless Fracas by Piguet with its beautiful yet at the same time coloratura expansive and creamy night blossom, Tubéreuse Criminelle by Lutens with its mentholated, polished soie sauvage or Carnal Flower by F.Malle with its coconut and eycalyptus-ladden tropical ambience, then think again: Balenciaga's forgotten vintage extrait Michelle is none of those things and is a throwback to another era. Surprisingly, Michelle is also sprinkled with a pinch of spice, not listed, a cinnamon-like effect which somehow provides a sweet facet along with the vanilla, yet reinforces the bloody, metallic facets of the tuberose and the wet earthiness of the rose in tandem with moss. It wears beautifully in the heat and eases itself into the cooler days of approaching autumn.

The vintage extrait de parfum which is the concentration in my possession (in the design on the right) is extremely long-lasting and smooth, while the Eau de Toilette (circulating in the classic design of Balenciaga fragrances depicted here) smells about the same, but with a radiance and expansion which could become too much too soon in my opinion.

Michelle is discontinued, but makes sporadic appearences on Ebay and etailers. The Balenciaga house is currently part of the Gucci Group (part of Pineault Printemps Redoute). Popular again thanks to the success of the "Motorcycle bag" and Nicolas Ghesquiere design and is set to produce a new fragrance under the aegis of Coty fronted by Charlotte Gainsbourg, which questions the possibility of ever resurrecting Michelle.

Pic of vintage coat design by Cristobal Balenciaga via pairofchairs.wordpress.com and of Michelle flacon via ecrater.com
*Share with link: Thursday, September 03, 2009