The original Gardénia, issued by Chanel in 1925 and composed by legendary perfumer Ernest Beaux who created all the early opi/opera of Chanel, was built on a fashion premise: The deco motifs of the 1920s exalted the almost cubist arrangement of flower petals, resulting in designs which were transported into impressive jewellery. Gardénia was not conceived as, nor was it meant to be, a gardenia soliflore, although the heavy-smelling blossom was picked thanks to its optical resemblance to Mademoiselle Chanel's favourite flower: the camelia, which doesn't hold a scent. The name in reality derives from the English word "garden" (it's jardin in French): a popular reference of the times, especially if we recall the Shalimar story and the gardens of Lahore that made the imagination run wild. That was then. 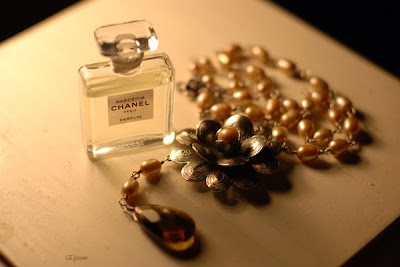 But gardenia fragrances in particular re-entered the consciousness of the public with a vengeance in the next decade, the 1930s, in a different manner. This was a time of financial difficulties and a more conservative cultural milieu, when every company was launching or re-issuing their own gardenia fragrance; advertising them as a return to neo-romanticism, the gardenia boutonnières of Edwardian dandies and the gardens in the South of France which provided welcome escapism. 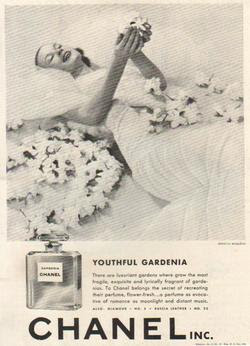 Indeed an American advertisement for Chanel Gardénia mentions how it's meant to evoke romantic gardens at the Riviera and tags it as a youthful fragrance. [Chanel is no stranger to capitalizing on advertising to promote specific perceptions of their products, as it famously did with No.5.]
It was 1936 after all when the hit song "These Foolish Things (Remind Me of You)" by Eric Maschwitz & Jack Starchey included the infamous lyric "gardenia perfume lingering on a pillow"...alongside "an airplane ticket to romantic places". Is it any wonder that in the economically "tough" decade of the 1970s Brian Ferry & Roxy Music chose to bring this song back doing their own cover on it (1973)? Chanel would eventually bring their Gardénia back from the dead too; but almost two decades later. And as recently as the end of the 2000s yet again, this time in their boutique line Les Exclusifs where's it's still available.

Olfactorily, the two versions cannot be any more different, providing a valuable history lesson for any inquisitive perfume lover: 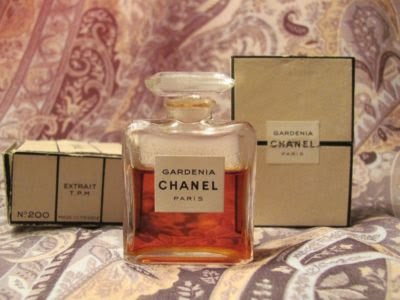 The vintage Chanel Gardénia was composed on a narcissus base with a green accent of styrallyl acetate; a freshly green note, naturally present in budding gardenias and a very popular inclusion in many classic floral chypres: It provides the gardenia greeness in the heart which compliments the mossiness of the background, from Miss Dior to Ma Griffe. The trick of composing a "gardenia chord" instead of using an extract from nature was necessitated by technical complications: No essence could be rendered (till very, very recently in fact and then only in some extremely limited distribution niche fragrances). The gardenia in the hands of Chanel is oscillating between green and creamy, as it's allied to other white florals with a powdery veil.
The top note of the vintage Gardénia however is surprising in that it's built on a violet accent, composed through octin and heptin methyl carbonate. The progression from the sweeter violet to the feminine floral harmony in the heart, featuring natural jasmine, makes for a rounder experience with woodier base notes recalling those in Chanel's own Bois des Îles or even Coty's Imprevu, with a spicy whiff of vetiver lingering. 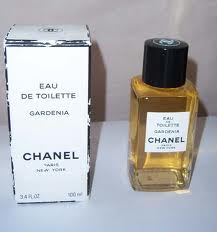 The vintage came in extrait de parfum (a very round and feminine smell) and later Eau de Toilette in the standard square bottles with the round black screw-on cap. Opening one, made me realise how different the perceptions of a floral were in those eras back contrasted with today: Although I can feel the delicate rendering of petals, there is no immediate "department-store atmosphere" of a hundred florals sprayed simultaneously into the air. Drop by drop, it's silky and polished, like a strand of patina rose pearls in slightly differing diameter. 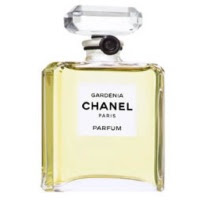 The original version of Gardenia circulated well into the 1950s, but it disappeared at some point when other Chanel fragrances such as No.19 and Cristalle entered the scene. Sometimes the labels did not have the French accent aigu for the American market. 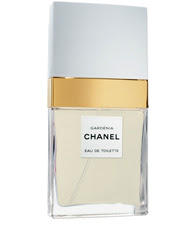 An effort was made to bring it back alongside the more faithfully rendered classics Cuir de Russie and Bois des Iles in the Chanel "Rue Cambon" exclusive boutique circuit at the cusp of the 1990s: Regrettably, it was the least resistant link in the chain, accounting for a rather destitute white floral. The bottle in extrait was rectangular with a white label like standard Chanel extraits (depicted) and the colour of the juice a light yellow. There was also a limited edition Eau de Toilette in a rectangular bottle edged in gold, with white label and white cap in the 1990s (shown on the right). 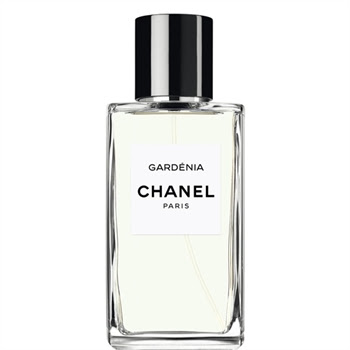 The modern version of Gardénia as part of Chanel Les Exclusifs more upscale line, reworked by Jacques Polge, conforms to the latest regulations and changing tastes. Thus it is comparatively much thinner, stretched to its limit, based on a standard white floral chord with fresh & green jasmine/hedione, "clean" orange blossom cologne-ish notes and just a smidgen of tuberose (and absolutely no gardenia whatsoever). A delicate vanilla base is the only other detectable note, very light and soft without much sweetness. The fragrance's popularity and reception is no doubt accounted by its transparent and easy demeanor which lends itself easily to any wearer. There is a young, ice-princess vibe about it, rather classy in its sex-denying way.

It leaves something to be desired in fulfilling a powerful romantic imagery and rather much in providing an avant-garde entry in the field of white florals (which it could have tried if it wanted to); but its wearability provides options for casual & office wearing, which is more than can be said for some of the more sumptuous and demanding vintages. Among Les Exclusifs, in Eau de Toilette concentration with an even paler colour of juice than before, Gardénia is also one of the most fleeting, making for a brief experience that needs to be constantly renewed.


And Brian Ferry reprises it in his own innimitable style in a rare 1974 video.