One of the major pitfalls that awaits a perfume enthusiast is for them to disregard valued, glamorous specimens of the past due to the merely trendy attire of the brand hosting them in the present. Coty and their Imprévu is a case in point! Miles away from the current celebuttante fruit-salads they serve now, Imprévu is a meaty course that still retains a degree of refinement; it's fine veal served with silver tableware. The delicious name, meaning "unforeseen", predisposes for a surprising impression and indeed this feminine leathery woody chypre from 1965 is unprecedented, unique and surprising in more than one way. They had it right when they advertised: "Beyond all expectations"! 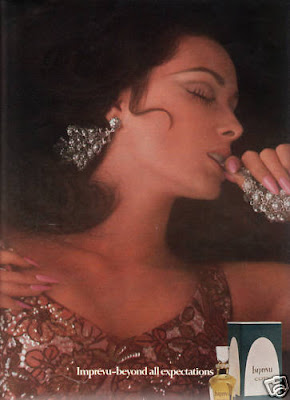 The timing in which Imprévu was introduced is crucial: On the one hand the Coty house had passed through the Symplegades of both the Great Depression and World War II and emerged still resilient, if diminished in radiance. François Coty's divorced wife had a brother-in-law, Philippe Cotnareanu, who was immersed in the business. Cotnareanu changed his name to Philip Cortney and under that pseudonym took rein of the colossal portfolio. Coty and Coty International were eventually sold to Chas. Pfizer & Co. for about $26 million in 1963, thus becoming divisions in the pharmaceuticals company's consumer products group. The 1965 launch was Coty's new perfume in 25 years! Success was almost immediate: By the end of 1968 Imprévu became the leading Coty fragrance.
On the other hand, Imprévu, composed by an unsung perfumer, also came at an opportune time in the global perfume zeitgeist: A time when greener and aldehydic scents were very popular: Yves St. Laurent had launched his glorious Y in 1964, while Guy Laroche issued the green tropical Fidji in 1966. The older favourites, Chanel No.5 and Miss Dior, were still best-sellers. But the not so griffe market presented considerable competition as well: Avon was going strong with Topaze, and Fabergé with the antithetical earthy Woodhue. Imprévu was perfect for the moment!
It's an irony and a testament to the changing tastes in fashion however that rather soon the strike of gold was at an end: Emeraude, L'Origan and L'Aimant became the long-standing classics in the Coty portfolio after the 1980s, condemning Imprévu in the disgrace of being practically given away at drugstores who sold it at seriously discounted prices. The above nevertheless is no reflection on the fragrance's value whatsoever. 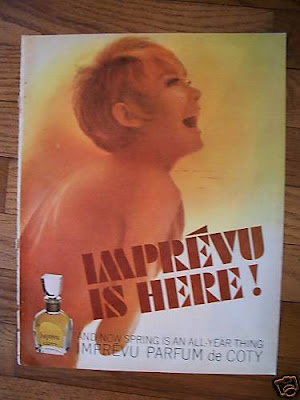 Imprévu (pronounced ahm-pre-VHU) by Coty is decidedly adult, like a long sip of extra dry martini when you know you really shouldn't or the deliberate "poisonous" smear of lipstick on a man's colar. It explores several themes of yore and does so with unrefuted elegance: From the aldehydic boosting of the crisp citrus (bergamot, bitter orange) opening, reminiscent of Coty's own Chypre (the latter is fresher and somewhat more piquant overall), to the mildly leathery heart, all the way down to the foresty conifers that hide beneath the abstract flowers. Like some classic fragrances in the cuir family (notably Tabac Blond by Caron) the tannic facet of leather is boosted and contrasted by the merest touch of cloves, registered to the mind as carnation. Overall fresh in that mossy way that classic chypres are fresh rather than cloying, the scent is very well-mannered despite the earthy oakmoss inclusion. What stays on the skin poised for long when the other elements have dissipated is the creamy woodiness of that drydown phase of Bois des Îles by Chanel.

Neither too woody nor leathery, nor too chypre, but striking a perfect balance between all those elements, Imprévu comes as the unexpected state of grace when you simply don't know what to choose and just need something that is truly unique and smells good at the same time. Even though marketed as a feminine, men who are adventurous wouldn't have trouble getting away with it. 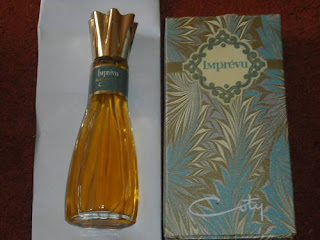 Although the usual bottle in which it is presented is the one depicted here and in the ads (which show the extrait de parfum version), other styles were also circulating, notably one with a simple gold-toned cap and a simple glass flacon with gold-tone lettering or another one with a simple plastic blue cover (especially for the versions circulating in Europe)
Imprévu by Coty has been discontinued for a long time now, with no plans by the company to bring it back as per our latest communication. Occasional sighthings are made on Ebay at elevated prices.