Chanel No.5 Through the Years

The renewed interest in Chanel No.5, due to the new advertising campaign with Audrey Tautou, reaffirms what has been a shared secret: "The powers that be at Chanel claim that a product bearing its name (be it in the form of scent, soap or bath oil) is sold every six seconds". And that the production, shot before the unfolding of the current economic crisis spared no costs: "A crew of 25 people reportedly worked on it for three weeks last May, filming everywhere from Paris to Limoges and, of course, Turkey". [source: Independent]

The new commercial {presented here} is a more haunting version with a nod to traditional values compared to the all dancing, outright-glamour-and-paparazzi-escaping of the one with Nikole Kidman some years ago. Shot by Baz Lurhman the fiary tale "I'm a dancer" routine was a modern, upbeat version ~with more thigh shown~ of the Roman Holiday scenario: VIP who finds true love at the side of a mere mortal, if you recall your Audrey Hepburn collection correctly. Funnily enough, Kidman looks nothing like Audrey Hepburn in her super-tall frame and attenuated blonde features, although Tautou does bear a passing resemblance thanks to the immense doe-eyes of both brunettes.
The current No.5 commercial reprises the romantic scenario "feminine classique" with a nod to the story-telling fantasy unconventional style of the OVNI, aka an anything-goes-style in which a sense of parody might be injected or the fantasy materializes. The latest Jean Pierre Jeunet commercial for Chanel No.5 uses angle-shots, photography and editing style which err on the side of romanticism, rather than the parody he had exhibited in Delicatessen or the follow-the-pale-faced-gamine-with-doe-eyes of Amélie. The invocation of the bottle in the reflections of lights from the window panes of the Orient Express train however, the warm saturation of colours, the bird's eye angle at the end showing the protagonists hugging while the interlocking CCs are left to shine on the mosaics through the fade-out are all masterful choices of film direction. The final shot reminds me of the bird'eyes shot of the fateful couple shot by Francis Ford Coppola in his Dracula (a film full of intertextuality in itself).

Chanel always paid a lot of attention to how they presented No.5 to the world and I took the initiative to present a little retrospective through the years a propos the latest:

The first illustration for No.5 featured famous illustrator's Georges Goursat/Sem stylised silhouette of a flapper, the fashion for liberated women being to embrace the new fragrance; the flowing dress in typical 20s flapper style, the bobbed hair, the ecstatic hands in the air. This was not an advertisement nevertheless (Sem was known for satirizing Chanel in his previous attempts) but an acknowledgement of the popularity of the new scent to its intented audience: the fashion-conscious and the hip. 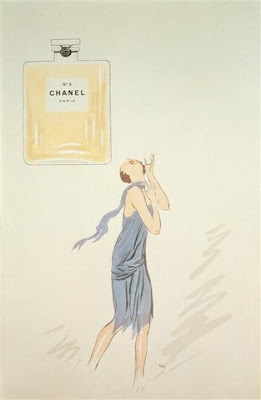 Next Coco Chanel herself posed at the Ritz Hotel suite where she stayed to photographer François Kollard in 1937, the grandeur of the suite and the majestic fireplace echoing the luxury of the fragrance. 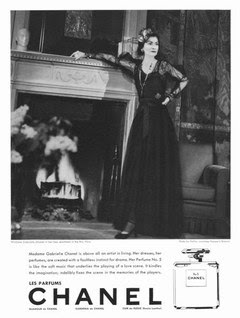 The tradition of pampering connected to No.5 persisted through the years through advertisements which hinted at the rapture and sense of luxury which its use provoked. 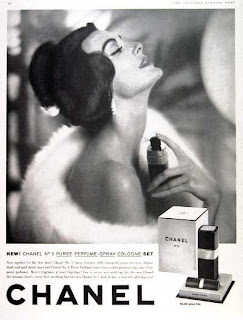 Marilyn Monroe ~although never chosen by Chanel herself as a spokeswoman for the fragrance~ became the best ambassadress and advertising vehicle of the brand in 1960. She revealed in an interview which asked her what she wore during her schedule that Chanel No.5 was her choice of bed attire. A indelible memory was scratched in the flummoxes of people's minds to this day and No.5 became legendary to people who had never thought of perfume before! Certainly not in those terms! 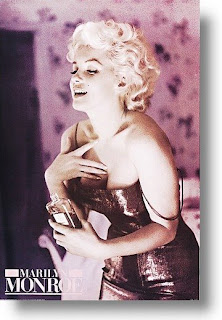 Ali Mc Graw and her more down-to-earth strong beauty took the torch in 1966 when she posed with her dark features as the face of Chanel No.5. The choice showed the emphasis which Chanel placed on their American audiences even then. 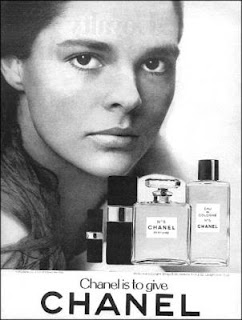 The 70s were scattered with print and TV ads of classically beautiful Catherine Deneuve (once upon a time face of Marianne, the French national emblem), the one who has been more closely related into people's minds with No.5. Ironically Deneueve was opting for Yves Saint Laurent for her clothes and for Guerlain for her perfumes! It doesn't matter: think of Chanel No.5 and some old ad depicting Catherine Deneuve is certain to pop up in your mind. 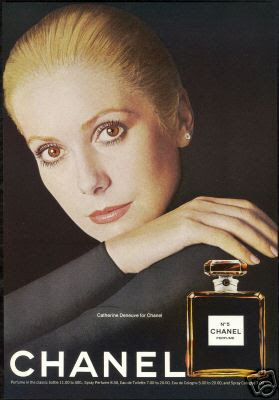 Unknown beauties were continuing to feature in advertisements or Chanel No.5 but the glamour and joie de vivre were always featured when the famous number was brought forth. 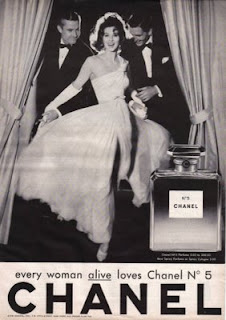 The last French face to front Chanel No.5 in the late 70s (in memorable Ridley Scott directed commercials) and all through the 80s, was Carole Bouquet. The French actress wasn't the most talented one to come out of the country but her beauty and chic radiated through the pages in classy sexiness. 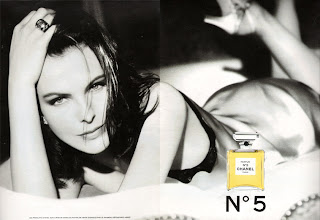 It was the bottle itself which took center stage in the pop images reminiscent of the Andy Warhol technique before the Nicole Kidman contract in 1985. Actually Warhol never made any reproductions of the No.5 bottle: it was a gesture of homage. 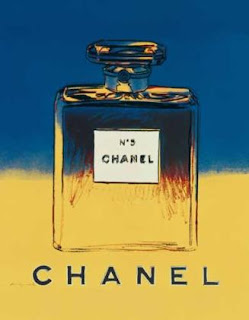 Estella Warren, swimmer, model and actress, was the early 2000s face for Chanel No.5 in what was an unforgetable campaign of commercials filmed by Luc Besson reprising the Little Red Riding Hood fairy tale in a most imaginative and creative melange. The print ads were visually striking, but not the same thing at all. 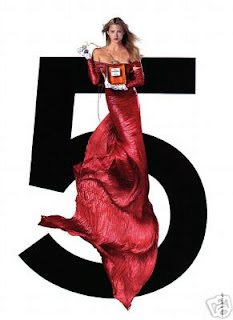 And then there was she who was at the height of her Hollywood career after worthy choices following an infamous divorce from Tom Cruise: Nicole Kidman had arrived and securing a contract to front Chanel No.5 was its apotheosis. 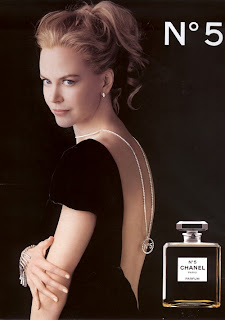 Please look at Perfume Shrine posts on Chanel No.5 commercial short-films through the years, clicking this link: Advertising Series part 1, I don't want to set the world on Fire.