Caught In Her Clutches ~Ma Griffe by Carven: fragrance review 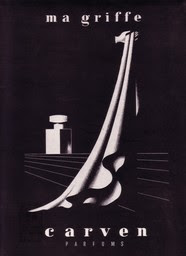 Mademoiselle Carven defined her fragrant prototype as "an outdoor perfume that needs to give up its heady character", resembling her, hence the name and the packaging: "white for innocence, youth, and freshness; green because to me it's the most beautiful colour in the world". The creation was none other than Ma Griffe (my signature), the legendary 1946 masterpiece of -by then- already anosmic Jean Carles, for which a startlingly different advertising campaign was devised: parachuting Trocadero in Paris with thousands of sample bottles! What a wonderful idea!

But Carven wasn't born so. Petite to extremis, Mademoiselle Carmen de Tomaso founded a fashion house at ni6, Rond Point des Champs Elysées to cater to dainty women's needs like her own, among them Michelle Morgan and Edith Piaf. She decided very early on that her Spanish-sounding name was not on a par in the Paris scene; so she went through the whole alphabet substituting consonants till she stumbled upon V. Carven it would be, alors! From then on she produced frocks as well as frags, from Vert et Blanc and the iconic men's Vétiver to the trio of Robe d'un Jour, Robe d'un Soir and Robe d'un Rêve (a dress for day, a dress for evening and a dress for a dream).

Ma Griffe is referenced in Janet Fitch's novel White Oleander , a story about dysfunctional foster care, as the signature scent of Olivia Johnstone, a stylish and agreeable prostitute next door who befriends the young narrator Astrid and later gives her a bottle of Penhaligon's, a metaphor for their relationship. Fitch had an aunt who was an actress, spoke French and traveled to Paris, so when "a really chic French perfume" was needed, Ma Griffe came to mind.

True to form, Ma Griffe is a very Parisian idea of a springtime and summer fragrance, très élegant, its cooling freshness contrasting with warmth underneath, powdery as nothing else can be and starkly green. The gardenia note is constructed on styralyll acetate, same as in Miss Dior one year later on a formula by Jean Carles perfectioned by Paul Vacher. Generally floral chypres of the times relied on the heady greenness of this synthesized aroma for their kick of feminine guiles, before progressing to jasmolactone and the tiglates of today.
Like I had written when composing the Chypre Series, Ma Griffe was conceived to be "very powdery dry and quite spicy thanks to the weird note of styrax, [...and] managed to be assertive in its name (it means "my signature", but also "my talon") and supremely sparkly and feminine in its aroma. It marked the introduction of chypres into the arena of professional women. Those were not factory workers of the war or flappers; they were secretaries at the new firms; twin set in place, string of pearls and a slick of lipstick on impeccably powdered faces. The psychology of those new chypres talked about women who earned their living by themselves, but did not manifest themselves as sexual predators: There is a sense of detachment and intelligence".


Sadly, Ma Griffe has changed its colours like a cornered chameleon over the years, due to change of ownership of the brand, resulting in the occasional cheapening of the formula, opposing opinions and confusion when trying to locate a bottle that prompts the djin to come out. The formula has indeed been reworked multiple times since its birth, ending with the latest version of 2006 eau de parfum being a one-dimensional soapy floral. Current owndership of Arco International is reportedly trying to reposition it. Let's hope so!

Maria, also known as Bittergrace to her accomplishes in pagan reversion, critters' photography, political wit and artistic smuttiness, had been most kind in sending me a round of vintage versions for me to compare and contrast with my own and the memories of the women in my family who have worn Ma Griffe faithfully.

The oldest, coming from the 70s in a splash bottle smells intensely citrusy, with an aldehydic fizz that makes a sparkling overture to the floral green proceedings. Since bergamot was one of the first photo sensitizers to be heavily restricted, I assume the second batch in a clear swirl-capped bottle, which comes from the 80s, has lost its shining citrus tang due to that. In addition it is heavily powdery and more assertive, in accordance to the times perhaps, with a pleasing off note that manages to remind me of the impossibly chic fragrance my grandmother wore. Last, but not least, an early to mid-90s formula of parfum de toilette reveals facets of the 80s vintage but less potent, while still not as bright as the first one, but quite good.
Maria warned me about the 'eau de toilette' in a broad-shouldered bottle with a green plastic cap, describing it as "just unbelievably awful. Avoid it like the plague!" Duly noted, Maria!

Originally Ma Griffe was marketed as a young scent at a time when the youth segment had not been catered for. Ironically one of the most common complaints is it smells old. Myself, I ascribe that only to changed perceptions and vogues. 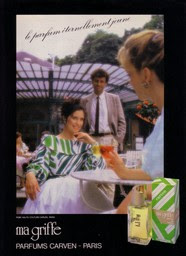 Ma Griffe can be traced on online discounters, certain shops and on Ebay. Careful attention to packaging and bottles as well as sampling from different periods might help you find the version you prefer.