Utter the names Luca Turin & Tania Sanchez and a combination of their polarising "Guide's", irrepresible wit and -equally irrepresible- snark, all rolled into one, flash into one's mind like LED-lamps that flicker between a P anode and a N cathode throughout eternity. The reason to read their newest venture isn't quite all of the above, nevertheless: Dropping the snark for a programmatically positive outlook ~The Little Book of Perfumes is all about 5-star perfumes reviews, aka "masterpieces" according to the authors~ they're not simply fawning reviews as met with in other guides, not being short on addressing serious fragrance industry issues either. (After all, if you don't know Luca is rather fond of the smell of Napalm in the morning, you don't know anything yet.) 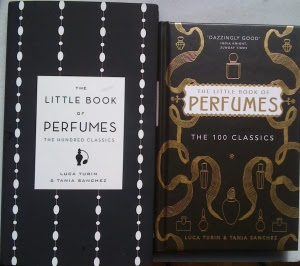 Although the material is largely taken from the previous Perfumes,The Guide (review here and a small practical note on all the different editions here), serving as a petite compendium or a Xmas gift to spark fun discussion over the course of wine & cheese among people who raise their eyebrows up to their  paretial bone upon hearing you possess a "fragrance collection" ("say what, more than 5???? Why????"), there is a difference: For several of those 96 reviews (more of which below) there is a small 2011 addendum, mostly by Sanchez, that chronicles the evolution that time and IFRA allergens & raw materials regulations have administered to these fragrances. And this is mainly the interest for those who already own a copy of the 2008 book: Staunchy perfume enthusiasts already know most of what's to know about reformulations and search the Net for info regularly. But those who're budding in the aficion will get a kick out of getting their sentiments that "something's not quite right in the frag they loved any more" validated.

All is not bad news, though, in those addenda mentioned, even if heads at Dior almost collectively (and a couple of the PR contigency plan at Guerlain) must be cussing right & left most probably right about now (Well, not really, for the most part the authors proclaim the work rendered "as best as could be under the circumstances"). Some fragrances have in fact upgraded, if that's possible! I specifically mention 96 perfume reviews because 4 out of the 100 are hors catégorie, being reconstructions specifically for L'Osmothèque (thus making them unavailable for purchase). A couple of them featured in the "little book" are still resolutely discontinued (Yohji pour Homme and Le Feu d'Issey for instance or more recently L'Artisan's Vanilia) but hope dies last, in the Turin & Sanchez universe (And why not, I ask you? Fougère Royale 2010 AD I'm not looking at you, don't get any ideas in your silly head!).
So what's left is 90+ reviews of things every perfume enthusiast (and not only) should note down to smell sometime.

The new material includes a foreword by Tania Sanchez (written in good pace perfumista-style and ringing very true) and an essay on the Osmothèque by Luca Turin (in his trademark eloquent polemic, mixing music metaphors and similes which caress the cerebral cortex); there are four reviews of long-lost, beautiful Osmothèque perfumes the authors tested during a presentation on perfume by the brilliant Patricia de Nicolaï, curator of the Osmothèque, at the French Embassy in Washington, DC, organized by Smithsonian Associates. "We give you L’Origan, described by me by LT’s request, and Chypre de Coty, Emeraude and Iris Gris, described by LT at my request" clarifies Tania Sanchez.
The top ten lists (exacted by all publishers worth their print salt, per Tania) have been updated and there is a new "Desert Island" top list for each respective author. I found the added resources & shopping short essay at the end rather meagre, personally (lots of other helpful resource guides are available online), though the Perfumed Court is hailed as a decanting service for when you can't get hold of something any other way and The Perfumer's Apprentice gets a nod for those eager to smell the raw materials themselves.(With which I would urge you should familiarise yourselves, if you're serious about this whole perfume thing)

To make things practical, I have noted down which fragrances are considered to have gotten BETTER/STAYED THE SAME in 2011 than the 2007 sample bottles the writing duo had received (in alphabetical order):

And these are the fragrances which are considered to have gotten (somewhat!) WORSE/CHANGED in 2011 than the 2007 sample bottles the writing duo had received (in alphabetical order). Please note, the fragrances below are still considered worthy of inclusion in the compendium of 5-stars:

You might have noticed that that makes it roughly 35 "updates" (I excluded a couple, because of simply announcing news of "discontinuation" such as Theo Fennel's Scent or due to ambivalence) and I expect that might get book buyers pondificating the issue. Yet interestingly, there are some surprising results, especially for some perfume lovers who have been disappointed in certain notable classics lately (Shalimar, Cristalle) and can now be enthused anew. But I won't elaborate further; you have to check it out for yourselves!
I will only add that I'm glad Tania added that necessary deterrent on Sécrétions Magnifiques for anyone who couldn't really fathom how such a brave (read: disgusting) scent entered the masterpieces collection, or anyone who might go ahead and spray some on their lapels before going out on a date or job interview, God forbid; "masterpiece" and "pleasant" are not mutually inclusive terms! (And if you disagree, what the hell are you doing reading Turin & Sanchez or this blog?)

The book circulates under two editions: One American by Penguin US, another British by Profile UK. They are exactly the same, as far as I know, but they feature a different cover, as shown on the photo (taken from Tania Sanchez with many thanks)
The US edition is on pre-order on this link. The UK edition is on pre-order on this link. Official date of release is October 31st 2011.
*Share with link: Friday, October 21, 2011