Perfumes the Guide by Turin and Sanchez: sneak preview and review 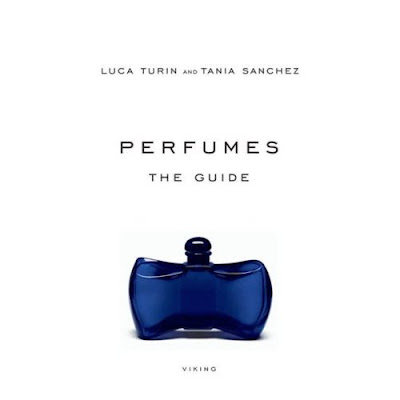 The perfume guide being written by odor guru Luca Turin with co-author and his newlywed Tania Sanchez was shrouded in mystery for some time. It has been 15 years since Turin had penned the original, now out-of-print Parfums, Le Guide in French. Since then the eruption of the Internet made English-reading audiences thirsty for his erudition, sporadically catered for through his NZZ Folio column and defunct blog. Finally this new guide is fast approaching. I received my copy in advance and I am in the position to tell you that it is a good read! Perfume Shrine is in fact the first perfume blog to post an actual review of the new Guide.

Although it claims to be “the definitive guide to the world of perfume”, I find that such a task is so monumental in its scope that it might as well be awarded the Everest-climbing seal of effort. It’s simply a Titan feat to accomplish! However, Perfumes the Guide impressed me as being a very pleasurable guide through the opacity of perfume shopping, low on the purple-o-Meter and more importantly one that does not require a former education on the subject while being scientifically elucidating. 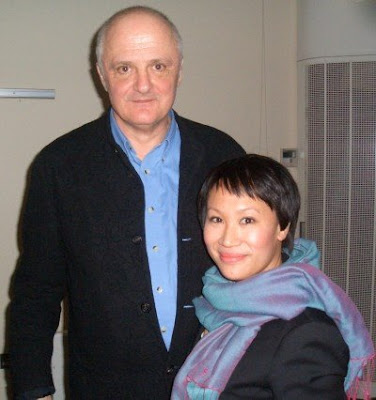 How does the book "flow"?
Luca continues to write in his familiar vernacular (references to classical music and sports cars abound) that manages to be witty and caustic most of the time, even if one disagrees, with the admirable trait of laconic delivery. The latter should serve as a lesson to my anal-retentive habit of elaborating on any possible historical minutiae when writing myself.
Tania seems to have also benefited from her stint as editor-cum-muse, not having forgotten her Makeup Alley roots which she credits. Her writing is removed from previous exaggerations and is to the point, sometimes rivaling her prototype in acerbity and realism. They alternatively (identified by initials) take on almost 1500 fragrances -per the book jacket- circulating in department stores, drugstores and niche boutiques today. Something at every price point. The system is easy and relies on a 5 star point scale (from 1 for awful to 5 for masterpiece) ~which is to be expected in any product qualitatively measured these days. Wine appreciation guides as well as cinephile sites have contributed to this system becoming increasingly common. It will do.

The structure of the book is divided into uneven parts:

1. The brief introduction by TS focuses on how perfume is part of culture and criticism is inherent in any art form ~ergo in perfume as well, and everyone should get used to it
2. Essay on how to choose fragrances for oneself and for the occassion
3. Essay on why would men want to wear scent and categories of masculine fragrances with impromptu, fun names like "Lawrence of Arabia" for orientals
4. A brief introduction to the history of modern perfumes' emergence, which to LT is inextricably tied to the rise in synthetics. Somehow like a brick off his previous book but informative.
5. Some answers to frequently asked elementary questions, one of which is the perennial “skin chemistry” affecting fragrances (the short answer is "not really")
6. The reviews, which take the huge bulk of the book in easy to follow alphabetical order
7. A very brief glossary of terms
8. Top ten lists in the categories of: best feminines, best masculines, best cross-gender choices, best picks from floral, chypre and oriental families and the innovatively intelligent best quiet and best loud fragrances; as an epilogue an index by star-rating of all the fragrances reviewed.

~The to-the-point monikers beside the perfumes, instead of general classifications which usually prove so pointless to the reader. Instead the two-word descriptors are uncunningly accurate most of the time. Those range from the merely descriptive (“rasberry vanilla” for Armani Diamonds) to the outright dismissive (“nasty floral” for Bright Crystal by Versace or “fruity death” for Nanette Lepore), through the poetically inclined (“angry rose” for Malle’s Une Rose or “snowy floral” for Pleasures) and the iconically untouchables (“reference vetiver” for Guerlain’s).
I had much fun with the “not X” and “not Y” descriptors besides perfumes which are actually named X or Y something. It is so true, it’s hilarious! It’s refreshing to see that Lauder's Private Collection Tuberose Gardenia gets the “true gardenia” descriptor, because hey, it does smell like it and making it into the best florals category. 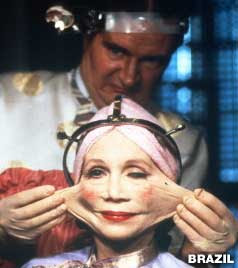 ~That no perfume is spared based on its former laurels. This is a personal pet peeve of mine, I admit, when reading perfume criticism online; especially on perfume blogs and fora. Too often the illustrious reputation and history of a fragrance earn it a state of grace that is completely undeserved in its present formulation. To their credit, LT and TS dismember each and every one of those old beauties and see just how successful the facelift was: Are there any visible scars? Forehead immovable? Eyes not going beyond the perpetually surprised? Oh, it’s breathing and smiling again, there’s a dear! Or is it terminally confined to Joan-Rivers-land? It’s a great misfortune that the majority belongs to the latter category. Caron fans are in for a bumby landing!

~That two indie perfumers (and people who are trully sweet) received accolades for their work in this tome: Andy Tauer, mainly for his superb L’air du desert marocain (which earned the masterpiece 5-star award, with honorable mentions for Le Maroc, Rêverie and Lonestar Memories). And Vero Kern whose Onda, Kiki and Rubj received each 4 stars. For someone who is mentioned as coming initially from aromatherapy (a no-no obviously in LT’s books), this is not just high praise, it’s being toured round Zeus for the first time ever. Bravo Vero!

~That Luca Turin has relaxed his stance against perfumes that use only natural essences and included creations by Dominique Dubrana, who will be featured on these pages soon. A small step for one man; a huge step for a whole artistic movement.

~The impression that fragrances created by friend perfumers are seemingly described in more raptured tones. The fact that some of those perfumers are actually mentioned as friends leaves a little bit of hesitancy to the reader in ingesting the opinion proferred. Not that I doubt the best possible intentions, mind you.

~The idolatry surrounding most of Sophia Grojsman’s scents down to 100% Love (formely known as the artwork named S-Love). Do I read her referred to as trismegista? I can’t explain why. I trust it does not fall under the previous category. The comparable disparagement of Jean Claude Ellena’s and Olivia Giacobetti's aesthetic with sporadic exceptions.
Celebrity deathmatch indeed of two diametrically antithetical worlds.

~In fact there is a tendency of formed opinion regarding brands more than individual perfumes (By Killian is "good" while Le Labo is "bad", although to me they seem to be equally poseurs). I might attribute that to opinion on the concept of a line, however.

~The glossary provided is very poor in a guide that purpots to be “the definitive” one. Perhaps they meant it as a help through the lingo used throughout the reviews. For the perfume enthusiast it is formulaic and not offering anything new.


In essence (pun intended), Perfumes The Guide is not going the exposé route that Chandler Burr did with his The Perfect Scent and therefore perfume lovers will not find out as many revelations either, but it is an absorbing, very entertaining read that will be referenced from now on on every possible online venue. Rookies especially will have a field day with the latter activity (bound to grate on the nerves of the rest of us). More seasoned perfumephiles can disagree from time to time... Oh and Luca, please drop the Keen fishing sandals over socks.

Perfumes the Guide is officially coming out on April 10. You can preorder it clicking Perfumes: The Guide

Pic of book jacket courtesy of Amazon, pic of LT and TS courtesy of the perfume pilgrim. Pic from the Terry Gilliam 1985 film Brazil courtesy of filmforum.org
*Share with link: Friday, March 28, 2008