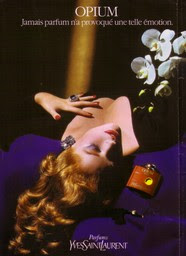 Was this my life, or did I dream it? That seemingly rhetorical question might drive one crazy given sufficient circumstances. After all, isn't all life, "is all we see and seem but a dream within a dream?" like Poe used to say. Or as the ancient Greeks poetically put it: "οναρ σκιας ανθρωπος" (man is but a shadow's dream).
My thoughts revert to these aphorisms, as I converge Opium by Yves Saint Laurent and Sergio Leone's swansong masterpiece, Once upon a time in America in my mind. My proclivities to the fragrance being a given and my fondness for that final enigmatic scene in which De Niro is beatifically smiling through the somnolent haze of opium vapors, it was natural to be so; if only because, like the drug, Opium is to be worn lying down. Pilgrimage was sorely lacking till now and the Gods have been accusing me of hubris for too long.

History of YSL Opium Perfume
Yves Saint Laurent was at the zenith of his career when he envisioned a decadent, baroque perfume evoking the exotic Orient: "It will be the greatest perfume of them all and we will call it Opium", he said, perhaps with a sideways wink to his own path to hallucinogenics' addiction. The year when the concept was conceived was 1972. It would take another 5 years for it to come to fruition.

The scent was composed by Jean Louis Sieuzac (Sonia Rykiel, Dune, the re-issue of Madame Rochas) in 1977 and art-directed by Chantal Roos, while the vermilion flacon was designed by Pierre Dinand.
Originally the name that Squibb, the American parent company of parfums Saint Laurent, wanted to christen the fragrance was Black Orchid, the same that Tom Ford later grabbed almost 30 years later for his own foray into perfume for what he hoped to be an equally controversial landmark.

Opium was in many ways a landmark: Its fragrance although tracing its lineage to great orientals of the past such as Shalimar, Habanita, Youth Dew and even Tabu (with its carnation-civet accord of "parfum de puta"), was perhaps the first to enter into the floriental category, with its very much detectable carnation, orange blossom and ylang-ylang among the plush of effulgent spice and starched resins, of which oppoponax stars. But also due to the fact that it broke with the previous trends of independent chypres and soft aldehydics, bringing back the orientals which had been forgotten since their last stint during the 20s and 30s and thus inaugurating the fashions for them again, resulting in everyone producing one from Coco, Poison, Ysatis, Boucheron Femme , all the way to Loulou.

Its launch party, at a junk in Manhattan's East River, with orientalised canopies and matching decor, marked the first time such opulence was applied to a fragrance's issue and ignited a series of mega-launches that were to become de rigeur. Its campaign, provocatively proclaiming "for those addicted to Yves Saint Laurent", earned it serious controversy in certain countries: A peanut-growing premier in Queensland, Australia had the perfume banned in his state. The US Federal Justice Department tried to outlaw it. In other countries due to drug import laws it had to be imported under a pseudonym, like contraband, and relabelled within the country.Its subsequent status of a bestseller proved that all the obstacles were within its stride and that man (and woman) is really a creature desiring what seems unattainable.

Bottle Design: the Oriental Inro
The bottle has a no less interesting tale surrounding it. According to Dinand's autobiography, he was working on a stylized inro, the small wooden box samurais carry on their belts, full of little drawers where herbs, spices and opium for alleviating the pain from their wounds are kept. The little drawers are held together by strings (hence the resulting tassel on the Opium bottle) and the top is crowned with a sculpted ball, called netsuke, replicated in the cap. "That's it!" said Saint Laurent, as soon as he saw it and fixed his mind on calling it Opium, the rest being history. 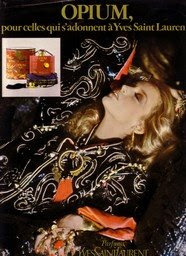 The advertising had always been titillating, starting with sprawled Jerry Hall, progressing to an unknown red-head (pictured above), through to Kate Moss and Sophie Dahl infamously in the nude (therefore banned but you can see it by clicking the link). Currently Malgosia Bela fronts the ad prints.

Lauder had been secretly working on their own spicy oriental, mysteriously also in a vermilion bottle, named after a mercury mineral found in China and smelling close to Opium,Cinnabar, which launched only weeks later. Yet they never had such commercial success with it, a fact that is treated with silence when you point it out to them. Whether there had been some form of trade espionage has never been proven and is only a figment of speculation.

Scent Description
Baptising yourself in Opium amounts to owning a droplet of the Styx, imparting invulnerability, shunning your combination sinners -- your lecherous liars and your miserly drunkards -- who dishonor the vices and bring them into bad repute. It speaks the tongue of angels through the wiles of devils, fanning its brocade-like resins over your humble existence, marring the opulent flowers and the bright citruses (bergamot, lemon and the orange-tinged essence of coriander) by a contaminated hand of animalistic sin. I can't distinguish any of its constituent parts separately, as they merge into a tremendously forceful message of abandon and escapism from the vagaries of life. Was it my life or did I dream it?
The iron-pressed linen note of the aldehydes in the beginning gives off -coupled with the spicy bite of the carnation accord- a rather "clean" veneer, which allows Opium the distinction of being among the easiest orientals to carry without feeling all soiled underneath your dress. The plumminess is closly interwoven with the balsams in the drydown phase, when the fragrance has dried on the skin and only its whispered message remains; quite woods, trickly resins like benzoin, labdanum and opoponax with an animalic darkness to them from the small footnote of pungent, bitter castoreum in the far end.

Opium never fails to bring forth compliments every single time I wear it and it is the robe de guerre on every occasion where ample backbone is required or a new acquaintance is going to take place. People never identify it as such and always ask what is that magnificent fragrance emanating. Sometimes it's perversely fun to see faces fall when I reveal the true identity, other times it only makes me think long and hard about over saturation of a particular scent in the collective unconscious and the detriment that brings to a whole generation who formed bad associations through it being ubiquitous.

Opium Summer Editions and Comparison of Concentrations
My preferred form is the Eau de toilette, which highlights the spicy bite and the moribund balsams perfectly, although the extrait de parfum is another excellent choice. The Secret de Parfum which had circulated at some point during the early 90s in a cut-out bottle from hard plastic in a hue darker than the original flacon was a concentration that turned me off Eau de Parfum (to which it amounted) . Luckily that error in judgment on the part of YSL Parfums has been amended and the current version of Eau de Parfum is merely denser and more opaque, although still true to the scent. The body products in the range are some of the best I have tried in terms of both fidelity to the scent (they have a slightly pronounced orange note which is very agreeable) and texture which melts under your caress. Men have also been catered for through a men's version that is woodier and more aromatic but also rather spicy, Opium pour homme. As a faithful Opium wearer for years I can attest to it being relatively the same despite possible reformulation. If eugenol however becomes seriously restricted -as has been discussed- then it would risk severe disfigurement. {edit to add, June 2010: Alas, it has...}

In later years, many lighter summer versions launched, as limited editions, aiming at making Opium fit for summer-wear and largely succeeding: Summer Fragrance (2002), Eau d'Eté (2004), Fleur de Shanghai (2005), Fleur Impériale (2006), Orchidée de Chine (2007), Poésie de Chine (2008). My personal favourite is Fleur de Shangai among them, replicated closely in the latest version.
This trend might have started by the non-limited, non-alcoholic Opium Fraicheur d'Orient, which got issued for summer in the mid-90s and which introduced a note from Angel and an intense citrus into the composition, to no particular pleasure derived. A limited edition bottle is Opium Orient Extreme from 2007, which only changes the exterior, not the scent.Various collector's bottles and versions will continue to get made. As long as it captures the imagination of perfume worshippers at its altar.
Notes:
Top: aldehydes,plum,pepper, tangerine, coriander,bergamot, lemon
Heart: clove, jasmine, cinnamon, rose, peach, orris, myrrh, ylang ylang
Base: benzoin, patchouli, oppoponax, cedar, sandalwood, labdanum, castoreum, musk, vanilla

If you want to watch a small tribute to the opium-escaping hero of Leone, click this link for highlights.