Originally thought out by perfumer Jean-Louis Sieuzac* (of Opium fame), is it any wonder Dior's Dune smells more like the warmed up sand where lush Venus-like bodies have lain in sweet surrender rather than the athletic Artemis/Diana figures which aquatic/oceanic ("sports") fragrances ~the classification in which the house puts it~ would suggest? The French have been known to prefer Venus over Diana in their artistic depictions over the centuries anyway. It's perhaps unjust and a sign of the celebrity-obsessed times that this Aphrodite of a scent is recurring into the scene because word has leaked out recently that Kate Middleton wore it as a signature scent when she was a student. 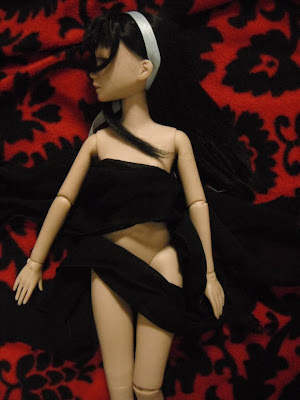 But at least it might give newcomers into the cult of perfume a chance to experience one of the lesser known Dior fragrances: Curiously enough, for something that has stayed in the market for 19 years and belongs to the LVMH portfolio, Dune, apart from a men's version Dune for Men of course with its tonka beat backdrop, has no flankers...

*[Although Jean-Louis Sieuzac proposed the formula, his submission was rejected by the Christian Dior perfumes head of development at the time. It took a modification by perfumer Nejla Bsiri Barbir (working at Parfumania) which sealed the deal and got Dune on the shelves in the end...]

Dior's Dune is a case study not only in the house's illustrious stable (scroll our Dior Series), but in the perfume pantheon in general: The zeitgeist by 1991, when the fragrance was issued, demanded a break with the shoulder-pads and moussed-up hair of the 1980s which invaded personal space alongside bombastic scents announcing its wearer from the elevator across the hall...or -in some memorable cases- across the adjoining building three weeks after the wearer had passed through its halls! The advent of ozonic-marines was on as a form of air freshening (and a subliminal chastity belt to attack towards the AIDS advent) and L'Eau d'Issey, interestingly issued exactly one year after Dune, was paving the path that New West by Aramis had started a few years ago. Where the Japanese aesthetic for restraint put forth mental images of limpid water lillies by the drop of water on a sparse zen bottle of brushed aluminum & frosted glass, the French were continuing their seductive scenery: the model was all prostrate on a sandy beach, the colour of antique pink silk underwear hinting at fleshy contours, eyes closed, giagantic eyelashes batting slowly, reminiscent of broom stems, a world capsized into a sphere of tranquility... Interestingly it's also routinely fronted by blonde beauties, suggesting there is an oriental for them apart from the flamenco-strewn dark-haired territory other classic fragrances have mapped out so well. Lately advertising images for Dune sadly capitulated into the slicked, oiled-up bodies that infest other Dior fragrance advertisments, but I prefer to keep the original ones in my mind. 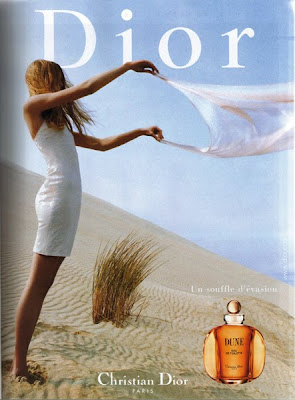 Perfume taxonomist Michael Edwards recounts how the heads at Christian Dior wanted to create a "marine type" of fragrance but without the harsh ozonic notes that were catapulting the market at the time. The original idea was a monastery's garden by the coast, herbal and aromatic.
To do the trick they relied on both a clever construction (which was more "smoky oriental" than "marine") and some ingenious, suggestive marketing to compliment it later.

The imagery was easier to devise, although not easy to pull off exactly as planned: The packaging was an inviting hue of peachy, as was the colour of the juice, to suggest femininity and soft flesh, while the star ingredient that suggested beachy slopes and wild growth, broom (what the French call genet) was featured on the advertising images in an effort to reinforce the suggestion of wild beaches of escapist delights. The seaside town of Biarritz, where the official launch was scheduled, gathering a huge amount of press professionals, was practically painted peach to echo the livery. A chic picnic on the beach was set to kickstart the festivities. But someone had forgotten a small detail in the mix (or was he/she nonchalant enough the European way not to check it out?). It was a nudist beach...

The composition is never too clever by half, it's intelligent: The dissonant opening impression of Dior's Dune relies on a bitterish interplay between the tarriness of lichen ~alongside the distinct bracken feel of broom (in reality deertongue goes into the formula)~ with the sweeter oriental elements of the base. It's almost harsh! The phenolic, after all, is never more aptly played than when juxtaposed with a sweetish note (such as in natural honey in the form of phenolic acids), as exhibited to great effect by Bvlgari's Black which was to follow at the end of the 1990s. The intelligence of Sieuzac nevertheless lied into injecting a "marine" fragrance with exactly the element that no one would expect from an oceanic-evoking landascape: warm oriental powder! If you lean closely, the top stage of Dune with its bitterish tendencies almost immediately gives way to a dry impression that almost recalls gusts of powder, but missing completely the candied violet-rose & makeup feel of the mainstays of feminine guiles, powder puffs. The official notes proclaim orris, but the effect is due to carrot seed (often used as a replication of the earthy, powdery undergrowth). This is a fragrance that is conceived as an extension of the boudoir into the outdoors, not an accoutrement out of it.
The warm amber (but not too sweet) and the musk base is there too under the other elements, almost like fig-filled biscuits rolled into floral tanning lotion. In fact I believe the Dior Bronze "summer fragrance" called Sweet Sun, was directly inspired by Dune. But the diaphanous interpretation of Dune allows it to pose as borderline "fresh". Almost "natural". Someone described it as "flesh-toned in the creepy way of artificial limps, not real ones", continuing into pronouncing it "marvellous" and "the bleakest beauty in all perfumery", and this Plastic Venus off the Waves stands indeed on a unique podium amidst the whole of modern perfumery: There's simply nothing quite like it.

The Eau de Toilette is my preferred concentration in this scent, possessing in greater degree the jarring elements which make Dune so very interesting to begin with. There is also an alcohol-free version for use in the sun, called Dune Sun, but as usual with alcohol-less versions, it lacks much staying power.