Patricia de Nicolai: Portrait of a Woman in a Man's World

"When I started, the big manager of the company was the brother of my grandmother. He wasn't the perfumer but he was the big manager. He wasn't an artistic man. First, he said 'you're a woman --' " and secondly, referring to the many years of training and apprenticeship required to become a master perfumer, she explained, "he told me, 'You'll get married, you'll have children, you will stop your job after a while.' " It's a typical tale across many occupations, even ones where, like fashion, the mythology and creative muse is female. "In Guerlain they are very machiste," de Nicolai continued, lifting a clenched fist to illustrate the emphasis. "The family who worked in the brand was only men, no women. And they like to embroider on those love stories!" 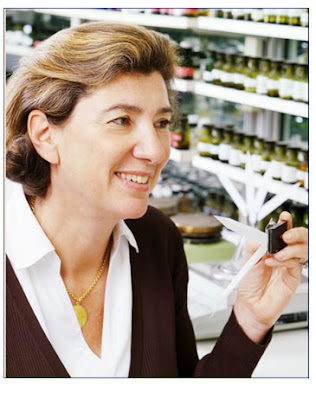 Thus elaborates Patricia de Nicolaï, 54, great-granddaughter of Maison Guerlain founder Pierre Guerlain, an ISIPCA graduate herself who was awarded best perfume creator in 1988 by the French Society of Perfumers and currently president of L'Osmothèque, the perfume museum in Versailles [you can read more on the Osmotheque on this link]. On her own site she graciously states "Jean-Paul Guerlain was her coach and thanks to him she has been trained in the best possible companies, places where you really learn the job to become a perfumer".

Whatever the case might be, her extensive line of perfumes enjoys a cult following, from the delectable masculine New York (which Dr.Turin has been wearing for years by his admission), the iris-strewn Balkis and the creamy tropical Juste un Rêve to the lush and balanced Maharanih, the more-than- just-a-cologne Carre d'As and the springtime in a bottle Le Temps d'une Fête. Some even come up as instant spontaneous fragrance recommendation whenever one searches for a creamy, delectable grown-up vanilla (Vanille Tonka), a melancholy heliotrope with feminine mystique (Sacrebleu), the definitive sophisticated summery cologne (Cologne Sologne) or the perfect mimosa (Mimosaique).
All the way right down to the candles and home fragrance which kickstarted her perfume company back in 1989 alongside Jean Louis Michau, back when the concept was still novel and romantic, her line breathes elegance and quality. Someone even once said that one of her candles was enough to start a minor religion...
She admits being influenced by the Guerlain tradition, the rich timbre, the beauty of the scents, the distinction of a signature style, and the tenacious sillage they impart. After all, her own personal fragrance as a young woman had been Après l’Ondée. She grafted those qualities into her own line to much success. In a world populated by men, Patricia de Nicolaï is a woman who has proven her own mettle and that's to be respected.

Read more on the article by Nathalie Atkinson on the National Post.