In the secrecy-laced world of perfumery it's not unusual to have the same idea colonise several brands. Sometimes it happens through the same "nose" (perfumer), such as Anne Flipo for Rykiel Woman and Barbara Bui Le Parfum or Maurice Roucel working for Musc Ravageur as well as L de Lempicka). Other times, because it's the direction dictated by a new material such as the ubiquitousness of oud (Rose Oud by Kilian, Oud Leather by Dior) or Ambroxan lately (Another 13 and Baie Rose 26, Not a Perfume by Juliette Has a Gun). Or it's a new technique; take the novel method of maceration of iris root for only a few weeks instead of three years resulting in a pleiad of niche iris scents 3-4 years ago. Added to that is also the reason of marketing: A new sector opened by a pioneer is exploited by other brands later on, even by home fragrances and functional products (this is called "trickle down" in industry speak). The point of Twin Peaks series on Perfume Shrine is exactly that: to pinpoint fragrances that are smell-alikes and delineate the reasons and hows of their resemblances.
Which brings us nicely to Poivre Samarcande by the exclusive boutique line of Hermès and Bang by Marc Jacobs which circulates in the department store circuit. Smell the two though and you can see there are less of six degrees of seperation between them.

Poivre Samarcande came at a time when Jean Claude Ellena was busy populating the -at the time- novel concept of boutique exclusive fragrances, the Hermessences (The original quartet which was sold in 2005 included also Rose Ikebana, Ambre Narguilé and Vétiver Tonka). It must have felt especially validating to have everyone follow, from Chanel down to Cartier and Dior La Collection and produce "exclusive" collections in a niche manner of presentation and concept (focus on raw materials, identical bottles, limited distribution, star perfumer working for them). Poivre Samarkande was in many ways a pioneer because it was incorporated into Jean Claude's experimentation with Iso E Super started with Déclaration, which he overdosed in the Hermès scent in order to boost the effect of an airy pepper accord, which although spicy is transliterated like a wood thanks to the boost of cedar, oak and patchouli notes. In actuality it's the Iso E Super which underpins the spices, making them shine and feel cool and silky, projecting in a linear manner. The unisex effect alongside its peculiar feel good, feel non-perfumey character has made it a soaring success. It was only natural the great idea would be perpetuated. Enter Marc Jacobs. 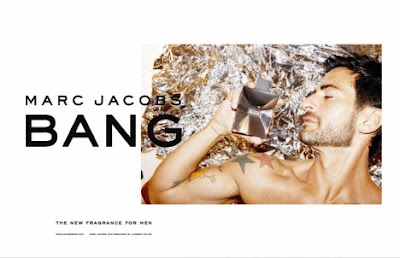 Bang is Marc Jacob's latest foray into perfume, coming out in July 2010. His line of scents is well thought out, but without presenting much of an excitement to the hearts of dedicated niche perfumery consumers. The scents simply read as a tad too "safe" to present the much coveted challenge we seek. However, their execution is usually very good, from the bright and happy Daisy to the snuggly but light powder of Amber Splash. Bang is no different: It takes its central leitmotif from someplace else, but the result isn't a total bore, probably because the original idea was an intelligent one to begin with and someone was wise enough not to muck with it too much. Bang was created for a “contemporary guy, who, even if he isn’t young, has a younger spirit.” Jacobs created the name first and development of the composition in cooperation with Coty followed. “I wanted to do something that I would love” said Jacobs. “I particularly like spice notes, especially pepper, so that became a starting place.”
Bang was art-directed by the revered veteran Ann Gottlieb who requested such notes as black, white and pink pepper, alongside masculine woody notes (Iso E Super and ambrox for you), while the base includes elemi resin (in itself having a peppery aroma), benzoin (a sweeter resin), vetiver, "white moss" (a patented IFF accord that was introduced in Jasmine White Moss in Estée Lauder's Private Collection line) and patchouli. The scent has a vibe of a metrosexual preening in front of a black-tiled bathroom mirror, so I would most enjoy smelling it on someone unexpected. Preferably a woman.

The two scents smell quite alike, Bang being a bit sweeter and with more pronounced vetiver and watered down in the lasting power stakes (to the point of annoying), but it's the optical differences which stuck in one's mind: On the one hand a refined and sparse representation of a leather-clad bottle, on the other a slicked-up Marc posing with the (impressively designed) bottle between his bare legs. Take your pick according to your aesthetics and wallet.
*Share with link: Sunday, January 23, 2011