If cleaninliness is next to godliness in Anglo-Saxon cultures, then Serge Lutens, the maestro of conceptual orientalia with plenty of "dirty", cuminy sprinkles along the way, re-introduces the idea with the moniker that cleanliness is next to luxury. His motto for his upcoming release leaves little doubt: "La propreté est une luxe!" Cleanliness is a luxury. Serge Lutens presents L'Eau Serge Lutens, "L'Anti-Parfum": "le savon le plus cher du monde" (i.e.the world's most expensive soap), that is to say a perfumer's idea of "clean", conceived alongside his long-time collaborator Chris Sheldrake. Testament to his path till now is Clair de Musc with its transparent, crystalised musk, the idea of a cozy second skin which breathes and lives with you. Or perhaps Nuit de Cellophane, an atypical floral Lutens based on osmanthus and light honeyed notes that crackle under the crispness of cellophane and the night. 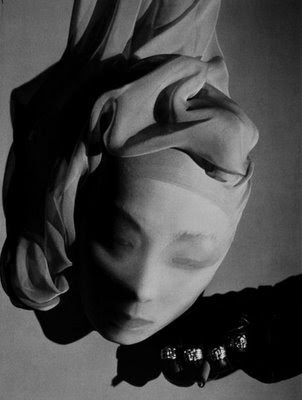 Indeed Lutens had been thinking about the notion of "clean" and how to interpret it for quite some time now, it's not just a sudden break with his previous portfolio. The avant-garde painter Francis Picabia (1879-1953) had interestingly proclaimed between 1912-1920 that "la propreté est le luxe du pauvre: soyez sale!" (i.e. cleanliness is the luxury of the poor: be dirty!") Certainly with the increasing commodities in plumbing and indoors water supply, the urban lower classes, for centuries destined to live among filth, suddenly had access to the elements of hugiene, equating them in outer appearence at least to the upper classes. This elitist stance by Picabia is echoing in my ears as I open the new promo material by Lutens: Could it be that Serge is having a good laugh on us all? It wouldn't be the first time he employs a healthy dose of humour in his opus (see Fille en Aiguilles, Tubereuse Criminelle, Mandarine Mandarin...).

The new offering is the upcoming international release for next spring (March), although it will be available in Europe from February 1st, and be part of the export line of fragrances aimed at both sexes. The promotion text is talking about this new diametrically antithetical stance which deviates from the opulent orientalia of plush woods and spices. "This creation is my response to a world that is overscented... I might even say 'embalmed'... in the sense that the ritual of wearing perfume is no longer about romance but part of a meaningless ritual." [quote] Stopping to think about the oversaturation of the market with several hundreds of intrusive perfumes that are screaming "me too" mentality about its wearers, he's got a point! Certainly the playfulness with which he has been handling his eponymous line in both concepts and names is a sign of his full grasp of how the discerning customer wants to distinguish themselves.

"Une chemise blanche, fraîche, à l'instant où on la passe. Une fraîcheur qui pursuit les heures. Une page blanche.": A clean white shirt at the moment one puts it on. Freshness which persists hour after hour. A blank page. Perhaps the real meaning lies at this last phrase: The new anti-perfume serves as a canvas on which to graft one's own personality. The whole notion of an eau (scented water) is a priori a study in lightness but also of tautology: "comme le chat s’appelle le chat!" (the way a cat is called a cat!). Lutens doesn't like cologne, so this is not following the Eau de Cologne genre. Therefore we have a composition which should be diaphanous (but not aquatic!) and easily lend itself to the personality of its wearer, projecting a clear, distinct message. Perfume historian Elisabeth de Feydeau, who was present at the presentation, insists on the complexity of its accords built on well-known notes: bracing hesperidia for the opening, magnolia with its waxy, paraffin-like aspect highlighted in the heart, soapy background of notes that recall the hermine furs that hide behind the royal personages of France's history. How ironic that this royal heritage is intermingled in a "parfum pauvre" if we are to take Picabia's quote to heart!

L'Eau Serge Lutens is presented in a very artistic, conceptial video on this link. Serge is seen smoking (there goes the French idea of "clean"), going up and down the elevator, contemplating with his usual philosophical attitude, the camera zooming on his shirt and tie, his hands, his gaze... I wouldn't expect anything less. 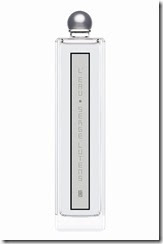 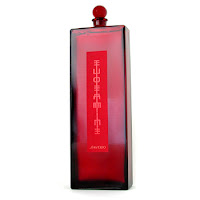 The new L'Eau Serge Lutens is embottled in a longer, even more architectural flacon which reminds me of the first cosmetic preparations by Shiseido and is perhaps a hark-back to those days of Eudermine, the beautifying lotion-cum-aromatic in the long red bottle. Its white, spartan looks suit the idea of "clean" admirably and it has something of an understated luxury about it. After all, "porteriez-vous des bijoux sales ?", would you wear dirty jewels?

The concept of perfume as parfum bijou is at the heart of the Lutensian mentality and finds us very simpatico. Perfume to be seen as luxury has to be seperated from both its status-symbol placement (so bourgeois! so nouveau riche!) and its use as a habitual gesture, like brushing one's teeth or applying face cream, mechanical moves that comprise the grooming routine. It needs to be savoured fully on the appropriate occasion. As he has intimated in a previous interview "I am not one to go for perfume wearing for every day, like a commodity. But when I do, I am not miserly, I use it with abandon..."