Narciso For Her by young, hip and understated designer Narciso Rodriguez had me at hello all those years ago with its delicious musky trail that is too sexy for words, yet polished enough to pass off as classy; ever since the brand has me curious as to what they come up with next. Proving to be a mega-trendsetter ever since its launch, Narciso for Her catapulted the market into a gene-pool sharing the same musks and "clean" synthesized patchouli bases shaped into the beautiful but traitorous dress of the "modern chypré"; in moments of truth and Sundays' waking up too late after a night partying next to delicious-looking strangers those scents shed that pretentious dress for the comfortable and more accurate flannel PJs of "woody florals with musks" and that's perfectly all right by me. But I digress... Luckily for all of us, the tremendous success of Narciso For Her didn't wind the Rodriguez brand into mechanically and pacingly launching myriads of "flankers"; with the exception of slight differences between the original range itself (eau de toilette vs eau de parfum vs parful roll-on vs Musk For Her oil) and the masculine counterpart issued one year ago, they have restrained themselves into an elegant rhythm which I respect. 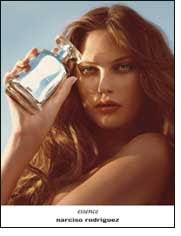 Essence, Rodriguez's newest feminine fragrance, didn't grab me as much as Narciso For Her initially did, but that doesn't mean it is a bad fragrance; on the contrary it has a strangely insidious, undercurrent appeal of being made by very skilled hands who were given a not-too-precise-brief and although I am snobishly trying to write it off as repetitive and trite, I can't really. In Essence Rodriguez collaborated again with Beauté Prestige International, the Paris-based fragrance division of the Shiseido Cosmetics Corporation, aiming to capture a "sensual and luminous fragrance with a modern heart of musc enhanced by radiant notes of rose petals, powder notes of iris and hints of amber resulting in a floral, powdery musc fragrance". It doesn't sound terribly exciting, it utilizes the same well-known notes that Narciso Rodriguez obviously loves and I bet that the Spanish-born perfumer Alberto Morillas of Firmenich ~at once a classicist and a modernist and amazingly prolific in his almost 40-years-long career~ could have provided the formula with both hands tied behind his back and blindfolded at the drop of a hat! A recipient of numerous awards, among them the coveted Prix Francois Coty in 2003, Alberto Morillas is responsible for such bestsellers as Armani's Sensi and Aqua di Gio, Bulgari Blu, Omnia and Thé Blanc, Carolina Herrera Chic and 212, Cartier's Le Baiser du Dragon , M7 for YSL, Marc Jacobs Daisy and of course another huge influence on the market: Flower by Kenzo. The man knows how to attract the audience's loyalty, therefore enough said. 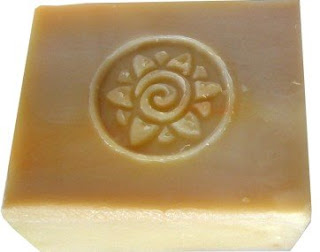 The overall effect of Narciso Rodriguez Essence is a clean unctuous almost soapy/aldehydic scent with classical mementos of White Linen minus some of the sharpness and Chanel No.5 minus the sweet florals or the skanky sexiness of lacy panties underneath prim suits, yet with an eerily reminiscent warm-skin-feel that the original Narciso for Her possessed as well. The clean musks featured, with their lathery bubbliness, have their lineage in Morillas's 212 and Daisy, while the powdery segment takes a page off Flower. Little development happens from the initial dryer-sheet sharply aliphatic and abstractly floral opening to the polite muskiness skin-like effect of probably Ambroxan*, (wishful-thinking) Muscenone** and Habanolide**. For what is worth the current modern white musk accord was first created by Alberto Morillas himself in Emporio Armani White for Her (combining Habanolide to Helvetolide**) and he used Muscenone in both Flower and Vanille 44 for niche brand Le Labo. The whole pared-down approach reminds me of the Escentric Molecules line. Although the powdery hazy effect is often attributed to iris, I do not detect any of its melancholic earthiness in the composition, same as with Infusion d'Iris by Prada which utilized a similar approach to the upscale-shampoo-latheriness vibe which seems to be all the rage now (judging by even such offerings as Chanel's Beige from Les Exclusifs). Luckily for the anosmiacs to Narciso For Her it seems to be rather different, enough to maybe give a jolt to their hypothalamus and be discernable to them.

Rodriguez wanted Essence to represent duality: "the intense and the ethereal, the simple and the complex" with an emphasis on "sun's purity" which reminds me of the "solar musks" accord of his first feminine perfume. I guess it's shorthand for "clean and warm" which Essence most certainly is. Lovers of that unperfume-y aspect as well as adventurers of all things delicately musky should flock to at least try it, the rest might find it non remarkable or even unpleasant in its screechy soapy tonalities which overstay their welcome impressively. It's pleasant enough for people into that genre, quite unisex and rather fun (for the price asked) to wear when that Sunday in flannels comes around once in a while, although not as enjoyably fulfilling as the original Narciso for Her is.

The bottle glows from within its mirrored core, round in its glass curvaceousness, created by noted industrial designer Ross Lovegrove (recipient of the prize Royal Designer for Industry in 2004 and art-exhibitor at MOMA and Guggenheim Museum in New York, the Centre Pompidou in Paris as well as the Design Museum in London). The eye-catching design is almost a futuristic, rounded interpretation of the original solid and austere Narciso For Her flacon.
The advertising campaign shot by the lens of Inez van Lamsweerde and Vinoodh Matadin
features supermodel Catherine MacNeil to whom Narciso "was drawn to instinctively".


Narciso Rodriguez Essence is available in Eau de Parfum 50ml/1.7oz and 100ml/3.4oz exclusively at Saks Fifth Avenue from March and globally in April.
Ancilary products include a body lotion, a bath and shower cream and a deodorant spray.