I was wondering when next there would be some blogosphere ruffle about a release which creates chasms of opinion, has Turania pan it mercilessly because it doesn't exactly follow the "grand manner"* and creates queues at online decanters to sample it to satisfy the most aimed-at attribute of them all: curiosity! Serge Lutens doesn't miss a beat: With L'Eau Serge Lutens he presents a completely atypical composition ~clean, iron-pressed, steaming like the hot towels infused with citrusy accents presented at luxury hotels for guests to freshen up before diving to the house-warming basket of delicacies. 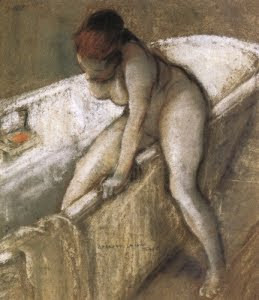 And he will certainly have everyone wondering how and why he chose this path. Some will put it down to artistic decisions after exhausting the theme of balsams, cedar, cumin and dried fruits, which Serge has indeed culminated into an apotheosis. It could be; great artists are those who abandon la manière (and please note how Gris Clair, Clair de Musc, Iris Silver Mist and Encens et Lavande are essentially none of those things). Some others will venture this is a move to corner the emerging China market. However it is reported that the real turnover on luxury products in China accounts for the household name brands (Cartier, Chanel, Hermès etc). Nah...Others still will put it down to the industry being restricted right and left because of IFRA; if one is only allowed to play with a diminished palette they might as well be insolent and do a 180degree turn!

Whatever it is, Serge Lutens presents L'Eau Serge Lutens, "L'Anti-Parfum": "le savon le plus cher du monde" (i.e.the world's most expensive soap), that is to say a perfumer's idea of "clean", conceived alongside his long-time collaborator Chris Sheldrake. The new fragrance, which I got as a preview and have been testing this past weekend fascinated by its surprising yet familiar feel, is not an eau de cologne version, certainly not an aquatic, nor a light skin-like oriental in the manner of Clair de Musc. L'Eau Serge Lutens is almost mineral-like, in the manner that Eau de Gentiane Blanche is like white volcanic dust on a cool morning, and it would make me feel that the convergence of Mars and the dark side of the Moon ~two diametrically different artists~ has finally happened.
Yet the feel compared to the Hermès cologne is different: a little less bitter in the opening, a hint of bleach even, a little sweeter overall while still a quite bitter "clean". It's like a silvery white book on a shelf, all cool glossy pages, bookended on one side by citrus (the tinge of a little grapefruit, some of the nitrile in Sécrétions Magnifiques too; Quest's Marenil molecule it seems? but good God don't stop reading yet!) and on the other end by musks. There is kinship** with Essence by Narciso Rodriguez as well as Perfect Veil by Creative Scentualisation to give you an idea, but it manages to be neither's replica and to stand on its own feet, more aloof, more Chinese dry-cleaner's white shirt than either.
I bet it will infuriate those who expect opulent baroque from Lutens by default and it will be shunned by neo-bourgeois as well as those who insist on "smelling pretty". L'Eau Serge Lutens is handsome ~and perfectly unisex~ in its austere cleanliness, but pretty it is not. The lasting power is phenomenal, especially on fabric, where the facets of bitter and "nautical" are more evident. 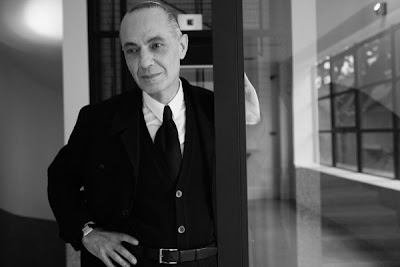 But if papa Serge maintains cleanliness is the new ideal, is "cleanliness next to godliness" or is that only a Protestant concept?
The avant-garde painter Francis Picabia (1879-1953) had interestingly proclaimed between 1912-1920 that "la propreté est le luxe du pauvre: soyez sale!" (i.e. "cleanliness is the luxury of the poor: be dirty!") Certainly with the increasing commodities in plumbing and indoors water supply, the urban lower classes ~ for centuries destined to live among filth~ suddenly had access to the elements of hugiene, equating them in outer appearence at least to the upper classes. This elitist stance by Picabia was echoing in my ears as I read the new promo material by Lutens in which "cleanliness is the new luxury": Could it be that Serge is having a good laugh on us all? It wouldn't be the first time he employs a healthy dose of humour in his opus (see Fille en Aiguilles, Tubereuse Criminelle, Mandarine Mandarin...) Personally, it's that wry humour which I most appreciate in his work, regardless of whether I wear them all.

*Well, we saw what happens to new releases following the grand manner: they get discontinued!

**One of the ingredients is Tris (tetramethylhydroxypiperidinol) Citrate, a widely used Ph adjuster and "buffer" which extends the life and aroma of deodorants, after shaves and eaux de toilette. I suppose this is part of the familiarity too.

The new L'Eau Serge Lutens is embottled in a longer, even more architectural flacon which reminds me of the first cosmetic preparations by Shiseido and Eudermine, the beautifying lotion-cum-aromatic in the long red bottle. L'Eau Serge Lutens is part of the export line and will be available in Europe from February 1st at the boutiques selling Lutens scents and from February 15th also online. Release for American stores is scheduled for March.

For those of you who simply can't wait, I have a sample for a lucky reader. State your interest in the comments! Draw is now closed, winner announced shortly!

In the interests of full disclosure I got sent a small sample as part of the communication by Les Salons which I am offering for the draw.