Bergamot in Fragrances and in Eau de Cologne: a Match made in Heaven

The use of bergamot in the Mediterranean fragrant waters is something of a tradition, even to this day. My mother, same as lots of men and women in my culture, used to carry a small splash bottle of fragrant alcoholic “eau” in her purse at all times, to refresh her hands or handkerchief during the day with a swift and effective “pick me up” and to even quick-cleanse mine in the absence of water and soap as a small child, thus killing two birds with one stone: eliminating some bacteria from casual contact with dirt and making me a fragrance aficionado ever since! 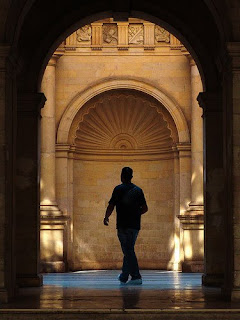 Although she kept her precious exotic perfumes at home, the bergamot, lemon or even pine-infused eau de Cologne travelled with her, refreshing many a time a weary travelling companion and alleviating a stuffy atmosphere of a couped- up car on a long drive across Europe. The citrus base of such waters has left an indelible mark on my conscious making me hanker after the smell of bergamot as the one cure to prevent nausea. But the history of Eau de Cologne and its inclusion of bergamot goes far, far back...
Although technically neroli (the essence rendered by the steam distillation of orange blossoms) is the prime constituent of an Eau de Cologne "type" of fragrance, bergamot gives it a finishing joyfulness and polish like no other thing.

The most influential scent of the 18th century and the court of Louis XV (nicknamed la cour parfumée due to the dictation of wearing a different scent every day) was Aqua Admirabilis, a composition by Gian Paolo Feminis. G.P.Feminis blended grape spirits (instead of today's undrinkable perfumer's alcohol), along with essences of neroli, lavender and rosemary adding the basic component of freshness, bergamot essential oil, thus creating the first recipe for what would later become celebrated by another name: Eau de Cologne. When Feminis moved from his native Italy to Köln/Cologne, in Germany, his nephew Jean Marie Farina from Santa Maria Maggiore Valle Vigezzo, in Italy, tweaked the refreshing elixir, which then became known by its place of production as Eau de Cologne or more specifically “Johann Maria Farina gegenüber dem Jülichs-Platz” (John Maria Farina opposite the Jülichs place) ~the address of the world's oldest Eau de Cologne and perfume factory. 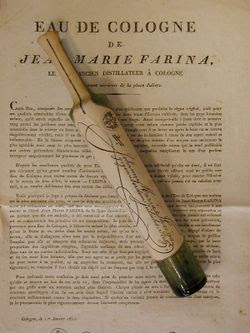 In 1708, Farina had written to his brother Jean Baptiste: “I have created a perfume which is reminiscent of a spring morning following a soft shower where fragrances of wild narcissi combine to that of sweet orange flowers. This perfume refreshes me and stimulates both my senses and imagination...” [1]. In June 1709 Johann Baptist Farina travelled to Cologne where his younger brother Johann Maria Farina had been working for his uncle since 1708. And so on the 13th of July Johann Baptist founded the company G.B.Farina, its production uninterupted ever since. Such was the popularity of the scent that according to records, 3700 bottles were delivered to a total of 39 addresses between 1730 and 1739! [2] Small papier-mâché boxes aromatized with bergamot were used to keep small precious mementos like locks of hair and billets doux wich showed bergamot's already established popularity. So the fragrance of the new "water" delighted the upper nobility and soon became a royal and imperial favourite. The red seal bearing the family crest which appeared on all products was a token of quality and authenticity. The bottles were moreover accompanied by a signed document with directions for use as “Eau de Cologne” wasn’t exclusively for exterior use. It was recommended for dental hygiene, a cure against bad breath and a way of avoiding infectious diseases! A panacea in disguise!
Napoleon Bonaparte who favoured Brown Windsor soap (which included lavender, bergamot and clove oils) used Eau de Cologne by the gallon, going through a bottle a day and consuming sugar cubes dipped in it. The German composer Richard Wagner on the other hand is credited with this quote in his correspondence: “I expect to use one liter of Eau de Cologne per month. Please send me three liters for one quarter so we can see how we manage”
Other Eaux de Cologne, such as the famous Cologne 4711 (Echt Kölnisch Wasser), named after its location at "Glockengasse No. 4711", share the name in common but not the formula. Before retiring, Farina sold the formula to Léonce Collas, while in 1806 Jean Marie Joseph Farina, a grand-grand-nephew of Giovanni Maria Farina (1685-1766), sold the rights to Armand Roger and Charles Gallet in 1862, the duo behind the Roger & Gallet brand [3], who produce the Eau de Cologne Extra Vielle in contrast to the Original Eau de Cologne from Cologne.

The suaveness and complexity of bergamot make it a supreme choice for inclusion in many an aromatic blend, not only for Eaux de Cologne, where it pairs with neroli (the par excellence ingredient in the Eau de Cologne blends), but other fragrances as well. Apart from the classic chypre accord and its ubiquitness in the olfactory family of “mossy woods”/chypres, bergamot adds its magic in a plethora of fragrances from other families as well, both for men as for women. It's especially welcome in leather scents, where its suaveness provides the perfect pairing for the pungent hide notes or bitter greens of quinolines.

Here is a small (by no means all inclusive) list of fragrances in which bergamot is clearly discernible: