"She had no gowns, no jewels, nothing. She only loved that, she felt made for that. She had such a desire to please, to be envied, to be seductive and sophisticated..."
~Guy de Maupassant La Parure

Much like Madame Loisel, the wife of a civil servant in Guy de Maupassant's novelette, who wants to live the good life, Parure by Guerlain (1975) stands as a precious commodity to be cherished; an ornament that lifts its wearer beyond the mundane and "l'air pauvre au millieu de femmes riches" (looking poor among rich women).

Parure radiates an outgoing feeling of luxury and refinement. One doesn't wear Parure to communicate their feelings, as they would with Chant d'Arômes or Vol de Nuit; or to entangle someone in a seductive web in the manner of Shalimar; but instead one wears Parure to show one's self and to be adored for everything she represents. It's therefore not an accident that it is the signature scent of Kim Catrall, the glamazonian and sexually uninhibited Samantha in Sex & the City, who upon hearing news of its discontinuation declared she has bought "every available bottle on earth" (clearly not, but it shows how loyal a following Parure produces).
In the tale by Maupassant, Madame Loisel borrows the coveted parure jewels from her rich acquaintance Madame Forestier to wear at a grand ball in which she has a truly memorable time but loses the necklace in the process. Ashamed to admit the truth to her friend, she is forced to buy a replacement and thus enter in heavy debt that will entail years of sacrifice and toil. Years later, as the two women meet on the street by chance, the moment of truth comes as Madame Loisel finally admits the circumstances, yet she hears crestfallen that the necklace was made of paste and not diamonds and therefore all her sacrifices to get herself out of the colossal debt had been unnecessary... Contrary to the above story, Parure glistens with the real shine of precious essences and imaginative artistry.

Parure etymologically comes from the Old French, meaning adornment, from the verb parer: to adorn, to prepare. According to Encyclopedia Britannica, parure thus denotes "a matched set of jewelry consisting of such pieces as earrings, bracelet, brooch, necklace, and ring". In fact the complicated suite might include such diverse items such as a necklace, a comb, a tiara, a diadem, a bandeau, a pair of bracelets, pins, rings, drop earrings or cluster-stud earrings, a brooch and even a belt clasp to be worn over an evening gown. Parures rose in popularity from the 17th century onwards in Europe and were mainly reserved for royalty and the really rich, denoting status, strength and the political power of its wearers. Napoléon loved lavishing these gem suites on Joséphine, for her to wear at state functions, while he gave similar sets to his second wife, Marie-Louise, later on. Court members and the higher social ranks vied for the best jewelers with orders for them to create elaborate and original suites that had the clever and intricate characteristic of modularity so that they could be remade into more fashionable, au courant jewels. Therefore necklaces could be worn intact or disassembled into bracelets, pendants, hair ornaments or brooches by incorporating smart interchangeable components and locking systems. 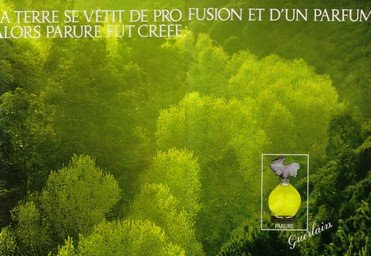 Ever since Guerlain had created the ultimate fruity chypre in the guise of the mysterious Mitsouko in 1919, they sought to create another memorable chypre for their customers. Jean Paul Guerlain, heartned by the success of Chant d'Arômes (1962) and Chamade (1969), tried to accomplish just that in 1975 with Parure. Although Guerlain themselves classify the scent under "floral chypre", Parure is a porthole into fruity chypres with a polished woodfloor background that according to Luca Turin evoke an oriental mood more than anything.

Guerlain's Parure opens on an effusive and noble interlay of bright and dark elements of golden bergamot and sharp greens that soon cede to the spicy notes in its heart that recall the cinnamon touch (due to styrax) that appears in Mitsouko as well. The ripeness of plummy goodness almost as if steeped in rum (comparable to the damascones in Lutens' Bois et Fruits or Feminité du Bois by Shiseido) evokes spring gatherings in stately houses: The floors polished to a shiny, waxy sheen, the curtains of damask draw;, vases full of narcotic lilacs; bright lights illuminating French windows that give way to a majestic view of the woods across the green lawn. Balsamic notes finish off the dinner as if a baba au rhum laced with delicate vanilla pods extract is being savoured while the gentlemen of the company are smoking cigars in the antecedent chamber.
Although Parure is a very radiant, self-confident composition that is not difficult to wear due to its smooth and lush generosity of nature, I find myself drawn more to the mysterious contemplation and sadness of Mitsouko. Those who find the latter hard to tame, full of sharp impediments however, might have better luck with the former. The eau de toilette of Parure is exceptionally lasting as well, especially in the vintage formula. 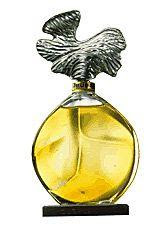 The original Parure extrait de parfum flacon, made by sculptor Robert Granai, took pride of place among the most luxurious of the Guerlain presentations: A round bottle topped by a 'slightly outrageous stopper' (per Jean Paul Guerlain), a delicate dentelle of crystal the inspiration behind which was a glowing sea-view sunset. 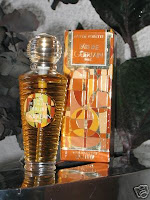 The Eau de Cologne concentration circulated in the classic "disk" bottles with the pyramidal stopper. Later on, the Eau de Toilette concentration was bottled in simpler architectural flacons with horizontal ribbing, a classical boule diaphanous stopper and a round red and orange label with the name Parure on the body, encased in a box with geometric designs in matching colours. 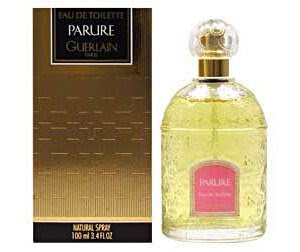 A reformulation that skewed the scent was implemented when the scent was rebottled in the classic "bee" flacons some years ago, but in comparison to the older eau de toilette it is of inferior quality.
In the end Parure was discontinued by Guerlain altogether some years ago due to low demand and is sometimes found online in auctions or at shops with old stock. Instead Guerlain decided to re-use the glorious, copyrighted name for a range of their makeup items. Let's hope that as long as the keep property of that name, there is some chance that the fragrance might be resurrected.

A sample of vintage Parure will be given to a lucky reader to experience this discontinued fragrance! State your interest.