Barbaric rose, rose of Attila, rose of the Goths, Rosicrucian and mystic. Where are you? The lines of Walt Whitman in my ears: "I too am not a bit tamed, I too am untranslatable, I sound my barbaric YAWP over the roofs of the world".
Or even this:

"November sun is sunlight poured through honey:
Old things, in such a light, grow subtle and fine.
Bare oaks are like still fire.
Talk to me: now we drink the evening's wine.
Look, how our shadows creep along the grave!--
And this way, how the gravel begins to shine!

This is the time of day for recollections,
For sentimental regrets, oblique allusions,
Rose-leaves, shrivelled in a musty jar.
Scatter them to the wind! There are tempests coming.
It is dark, with a windy star.

If human mouths were really roses, my dear,
-- (Why must we link things so?--)
I would tear yours petal by petal with slow murder.
I would pluck the stamens, the pistils,
The gold and the green,
-- Spreading the subtle sweetness that was your breath
On a cold wave of death....

Now let us walk back, slowly, as we came.
We will light the room with candles; they may shine
Like rows of yellow eyes.
Your hair is like spun fire, by candle-flame.
You smile at me--say nothing. You are wise.

For I think of you, flung down brutal darkness;
Crushed and red, with pale face.
I think of you, with your hair disordered and dripping.
And myself, rising red from that embrace". 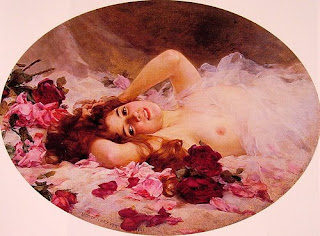 Rose Barbare by Guerlain is an elegant rendition of a floral composition that features rose notes, soft and a little astringent at times on my skin, like the Centifolia variety grown in Grasse rather than the opulent Damascena of the Ottoman and the Bulgarian variety. Rather sweet and not particularly powdery, underscored with some peach fruit ~but not as loudly fruity as Sa Majesté La Rose by Serge Lutens, nor as mysteriously chypré as Rose de Nuit by the same house~ Rose Barbare bears a passing resemblance with Nahéma, especially as it develops on skin. However the latter is fiestier, like a red-haired woman in wrath, whereas Rose Barbare is a dark blonde affair of sweetness, chic and insouciance.
Although the formal brief talks about a "heady and incisive Ottoman rose", I don’t find this one heady nor incisive. On the contrary it is light and chyprish and quite modern, in a retro-chic way that is au courant. It is a proud young scent, made for a house that needs an injection of young clientele.
Personally I am a little overwhelmed by Nahéma, so the prospect of a less potent rose would seem like a good idea to a person who is no big rose lover by my own admition. But it is also supposed to harness other elements of the Guerlain tradition and the chypré base of Mitsouko, Parure and Sous le Vent is one of them. Mitsouko has achieved legendary status through the years and is often used as an example of what great art in perfumery can achieve. However its impact on modern noses is demystifying and for that reason Guerlain probably wanted to keep the best elements of it and modernize the idea behind it. But whereas Mitsouko is all loss and poignant introversion, Rose Barbare is pride and prickly fingers.
The addition of synthetic musks, some honeyed fruit and aldehyde C11 gives both booziness and volume to the scent of Rose Barbare and alludes to its rich heritage. This one is a perfectly soft composition with some grassy accents and a base that hides a green and dusty quality reminiscent of oak moss, but not quite (since the latter is one ingredient that has had its fair share of allegations to be an irritant); instead patchouli, like in most modern "chypres", with its rich aroma anchors the composition into deeper waters of sexuality that might lure me in to explore further my dysfunctional relationship with rose.
Created by nose Francis Kurkdjian, who was one half of the creative team behind the winning composition of the mesmerizing Narciso Rodriguez for Her perfume, conceived in only three weeks for the opening of the renovated main boutique La Maison Guerlain at 68 Avenue des Champs-Elysées, Paris in 2005 and without a brief from the House according to Chandler Burr, it is a feat; a little enigma in that it stands alone in its pedestal as something unique, but at the same time it doesn’t produce a visceral reaction to it, which is perhaps to its detriment. 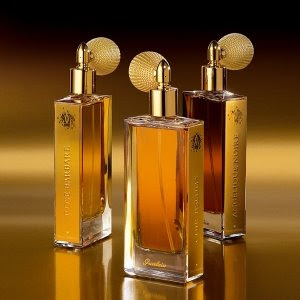 Rose Barbare forms part of the L'Art et la Manière line sold exclusively at boutiques Guerlain and the Guerlain espace at Begdrof Goodman, in tall architectural bottles with the name on the side in a wide golden "band" and an optional bulb atomiser included (My advice on those is not to leave them attached on the bottle as they allow evaporation of the juice).