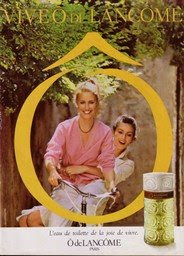 Inhaling a lemon grove's foliage trail in the morning air under hot azure skies, set to savour the day with optimism, full of joie de vivre must be one of life's simplest and most satisfying pleasures. Fragrances that give a lift to my step and make me face the mornings with élan are precious.
The task of achieving just that is not easy: it has to be uplifting, but also suave, not rasping on the senses which are slowly winding up to function from the night's inertia. Optimistic but with a hint of the stoic that marks the nature of my thoughts. Ô de Lancôme with its playfully double entendre of aqueous name and cool, dark green chyprish tendencies puts the right balance between the zesty burst of yellow hesperides and the alchemy of green herbs, interwoven like baroque music with its rounded forms philosophically puts some semblance of order into chaos.

The first advertisements for Ô de Lancôme emphasised the back to nature vibe that the French do so well with artistic merit: young women on bikes emerging from the rampant countryside, drenched in sunlight but with the coolness of spring air and dew in the fragrant grass, putting goosebumps on the skin at the hint of a breeze. It is so rare to encounter such a blatantly unpretentious image in fragrance advertising any more. Seeing those advertisements while leafing spring volumes of French Elle magazine, yearly devoted to beauty rituals of what seemed an arcane yet factually a simple mode, made me realize at a tender age how the natural world hides secrets of longing in the grass.

Composed in 1969 by perfumer René Gonnon, Ô de Lancôme came out at the time of Paris students' revolt and became an emblematic fresh Eau, taking the uber-successful Eau Sauvage one step further with the inclusion of synthetic aroma-chemical Thujopsanone. The consolidation of greenness under the crushed lemon leaves in the palm, with a subtle woody background resembles a viola da gamba supporting a clear, young female voice singing rounds of couplets in an allemande that converge on the same sweet surrender of a third majore of Provence in the end of a song in minore. Almost thirty years later and it retains the fresh radiance of a young girl, nary a shadow under the eye, curiously a tad sorrowful for the joys of life she has yet to experience.


Ô de Lancôme was according to Osmoz the start of


"a new olfactory adventure [..] and perfumery would continue to explore its charms and powers until the early 80’s: Eau de Rochas, de Courrèges, de Guerlain, de Patou, de Givenchy, Eau d’Hadrien (Annick Goutal), Eau de Cologne d’Hermès, and even Cristalle (Chanel) and Diorella (Dior) would successfully pick up the gauntlet of those fresh, signature thrills that left their mark on an entire generation".

Eau de Toilette comes in 75ml/2.5-oz and costs €48.50 and lasts incredibly well for this kind of fragrance.
Available at major department stores and Sephora.

The fragrance was re-issued in 1995 with a slight change in colouring in the packaging, which is helpful in identifying batches: the band around the bottle changed from ambery brown to bright green, same with the colour scheme of the box. The motif on the glass, like 60s wallpaper as Susan Irvine succinctly put it, remained the same.

There are two "flankers" to the original fragrance, both futile in my opinion for different reasons: O oui!, a fruity floral in a similar bottle with the palest white-ish blue colouring, aimed at generation Y, so saccharine-full generic and dull that it barely made a bleep on the radar; and a men's version in a green capped spartan column of a bottle called O pour Homme , marketed with the symbol of Mars (and male too) as the variation on O. Pleasurable thought it is, it seems like a redundant attempt to market what is already an eminently unisex fragrance in a new packaging to the opposite sex.
No need to splurge in getting both: the original is perfect on men as well and I highly recommend it.