"Poor man's jasmine" isn't quite the enthralling description, is it? And yet this is how Ylang-Ylang (pronounced "ee-LUNG-ee-LUNG") is affectionately refered to by perfumers, because the lowest grades of the oil are quite economical, especially for a flower essence. The inclusion of this naughty-looking yellow blossom in fragrances is legion to mention; contrary to what one might expect, not due to the lower costs, but due to its exquisite, heady, tropically sweet scent that is close to that of jasmine. Legendary perfumes such as Chamade by Guerlain, L'Air du temps by Nina Ricci, Patou's Sublime or Opium by Yves Saint Laurent are put on angel's wings thanks to this intoxicating blossom. 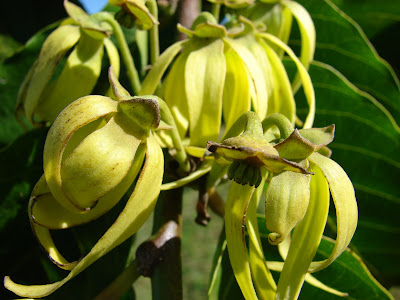 Botany & History
The botanical name Cananga Odorata is derived from the Malaysian word, “kenanga” which is the vernacular for the genus. The Genus Cananga has two species; only one of them is used in perfumery. Cananga odorata is the source of cananga and ylang-ylang oil and absolute while Cananga latifolia, which produces a functional oil, is also commercially used for other purposes.

The large, yellow-green, strongly scented flowers almost resemble tiny human parts, so it comes as no surprise that according to The Essential Oils Book by Colleen K. Dodt, ylang ylang:
“…. is believed to be antidepressant, aphrodisiac, sedative, calming, euphoric…It has been found effective in reducing sexual difficulties resulting from anxiety, stress, and depression.” Its effect is indeed exhilarating, introxicating, aphrodisiac!

Cananga odorata originated in South East Asia, discovered around 1740 in Malaysia by the French botanist Pierre Poivre, and it was introduced to the Comoros Islandes in 1909. It naturalized as far as Papua New Guinea, the  Pacific Islands and the Philipines; basically climates of humid warmth. It has also been introduced into tropical countries in Africa, Asia, the Caribbean and even the Americas, specifically as an essential oil plant.

Production of Ylang Ylang Aromatic Essences
The essential oil of cananga odorata is produced via steam distillation, resulting in two distinct products: cananga oil for the soap and toiletries manufacturingand ylang ylang oil, typically available in variations of grades (there are five of them and another one is a blend of the first 3, with the Superior Extra grade from Mayotte island off Madagascar being reseved for high quality fine fragrances; this is the one that Guerlain harvests for their exclusive boutique scent Mayotte in Les Parisiennes line). Ylang-Ylang Absolute is also available for the discerning perfumer: Extracted via volatile solvents, washing with alcohol the concrete rendered from the ylang ylang petals.The absolute has an intesely sweet-floral odour with a typical balsamic floral note. It aids diffusion and lingers for hours.  Last but not least, there is an ylang-ylang CO2 essence, a quite expensive and fine product distilled by carbon dioxide; a certain amount of pressure is applied and then the gas changes to liquid ensuring the preserving of the flower's odour profile.

Ylang Ylang in Perfumery & its Key Role at Guerlain &Chanel
For all its atrributes, ylang ylang is a very frequent floral essence in fine fragrance perfumery and a constituent in Vanille Galante. It naturally encompasses salicylates and eugenol (a spicy ingredient); the former in the form of benzyl salicylate is the basic ingredient in the Ambre Solaire suntan lotion, with its white flowers tinge, which is synonymous with summer vacations to many Europeans (The ingredient first entered the composition for its sunscreening properties and later overstayed thanks to the fond reactions of users to its smell).This is why many ylang ylang dominant fragrances produce the association with suntan lotions: so many people have used a suntan lotion aromatized with salicylates/ylang ylang in their lives! (for more fragrance notes associations refer to The Vocabulary of Scent)

For all practical purposes the scent of ylang-ylang has been instrumental in more legendary fragrances than we're anticipating. Fine grade ylang ylang is making its presence known even more than jasmine does in the iterations of Chanel legendary No.5 (and is an intergral part of other Chanel classics such as No.22, Bois des Iles and Cuir de Russie). It is notably a signature trademark of most Guerlain fragrances, including many of the revered classics, such as Mitsouko and L'Heure Bleue. Guerlain indeed value so much the production of ylang-ylang in Mayotte that they bought 20% of the plantation of Combani. Jean Paul Guerlain personally inspected the hectares with ylang-ylang there in the years from 1995 to 2002. Vicious tongues eventually squealed on him using illegal workers to pick up the flowers (because the cost on Mayotte was very high compared to neighbouring islands labourers), resulting in him abandoning the plantation and choosing to operate in the neighbouring island of Anjouan from then on. 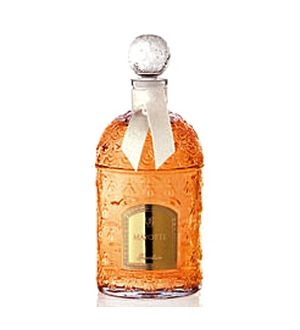