Horace had written* referring to his diet: "Me pascunt olivae, me cichorea, me malvae" ("As for me, olives, chicory, and mallows provide sustenance"). I don't know if I could supress my gluttony for "all the perfumes of Arabia" into a diet of only a few well-chosen ones, but Serge Lutens has a way into tempting me. Jeux de Peau, his newest (upcoming for the US) launch, is no exception. With vivid contrasts and a fascinating plot via Daedalean alleyways, it proves that the Master is still producing fragrances that can surprise and excite. 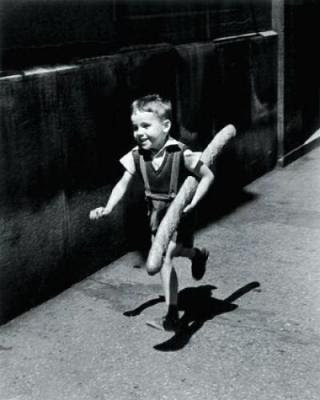 Jeux de Peau (pronounced Zø de POH) aka Skin Games, a fragrance for both genders, was supposed to smell of buttered toast, recalling Serge's quick run to the boulangerie across the road to pick up a baguette: "It gets me back to the 'don't forget to pick up the bread on the way back from school!' At the boulangerie at the end of the road, its captivating odour and its blond and warm light, a golden moment..." says Serge. Well, naughty, naughty Uncle, this is not what one would expect! The mercurial Serge actually hints at the humanity of the fragrance when he provocatively says "Eat, for this is my body"; especially if we consider that some human skins do smell like bread, the "dough" impression being a Ph variance.

Not that that this cryptic game would be unusual for any fan; in fact the fascination with the newest Lutensian opus comes exactly by its surprising character, at once a part of the Lutens-Sheldrake canon and a little apart; it's new and at the same time familiar, like seeing the photographs of antecedants and trying to pinpoint what part of the genetic roll of dice resulted in similarities with one's own offspring.
Starting to break down the composition of Jeux de Peau much talk has been conducted about the "burnt" note of pyrazines [see this lexicon on perfume effects according to notes/ingredients for definition] but I remain sceptical: Jeux de Peau doesn't really smell burnt or heavily roasted; more milky-spicy-golden in the sandalwood goodness that was Santal Blanc. It has a pronounced celery-pepper opening note, much like Chypre Rouge did, a trait that will certainly prove controversial, coupled with delectable milky-buttery notes which almost melt with pleasure on skin. The celery effect ~celery seeds were a common element in Mediaeval French cooking~ lasts for only about 5 minutes seguing into the main course: the buttery accords, alongside a distinctive, very pleasant chicory note.
Chicory, a bitterish-spicy smell, is a profoundly clever "note", if I am correct in surmissing it was the centre of the Jeux de Peau creation all along: It was substituting coffee in WWII, which might account for some of the memories of Serge, but it also evokes beer because producers add some in their stouts to lend flavour. Beer is so close to bread in olfactory terms that it's enough to put some on a pot on the stove for your guests to be fooled into thinking you're baking your own bread! (Not that you'd resort to such tricks, or would you?) Plus chicory root is 20% inulin which is very similar to starch. So the bread connection is there all right!
Immortelle/helichrysum notes (caramelic maple & spicy fenugreek facets) are allied to the familiar candied-dried fruits (apricot mainly, simply lovely!) which perfumer Chris Sheldrake has been respinning in novel and delecious combinations for Lutens ever since the inauguration of the Palais Royal niche line in 1992. This complex stage in Jeux de Peau by Lutens is sustained for a long, long time; it reminds me of rich Byzantine mosaics; tiny tesserae of glazed material surfacing and receding according to the angle from which you're viewing it. 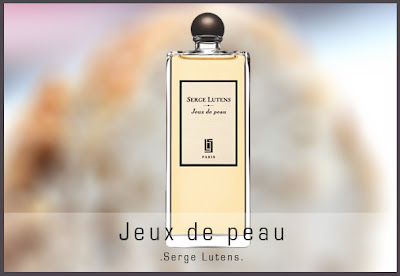 If you like the core accords of Féminité du Bois or Boxeuses, you will probably detect them easily in Jeux de Peau. But the two diverge in other ways: there's no familiar plum, not much cedar, nor leather (as in the case of Boxeuses), while we can see that wheat & barley are evoked throughout that warm "gourmand" woody. If Serge hadn't mentioned he was inspired from his forays to the baker's clutching the baguette for home, we wouldn't be so insistent on searching for toast; a whiff of Crusader's pain au four it is and delectably so I might add.

If you're wondering if Jeux de Peau would suit you, apart from the wise advice I can offer to always sample a Lutens any fragrance ~just in case~ I can suggest that if you're a lover of other intellectual oriental woodies such as Like This by Etat Libre d'Orange or Tea for Two by L'Artisan, you have high chances of liking this one very much as well. It's rather odd that Jeux de Peau launches in spring, when it's the sort of snuggly fragrance you'd want to put on while wrapped in a cashmere blanket watching nonchalantly the logs in the fireplace change colours from brown to vermillon to bright red to ashen, but Lutensian fans are not very season-specific anyway.

A sample of the upcoming Jeux de Peau will be given away to a reader. State in the comments what is your most fragrant memory from childhood not involving actual fine fragrance and I will pick a random winner. Draw is open till Friday midnight.

Jeux de Peau belonging to the export range of oblong bottles is out in France as we speak (79 euros for 50ml Eau de Parfum), but will launch internationally on March 1st. The Perfume Shoppe in Canada is already taking pre-orders.

An intelligent essay on the scent, in French, on Ambre Gris. Photograph in black & white Le Petit Parisien by Willie Ronis via Art is not Dead. Bottle pic via duftarchiv.de
Disclosure: Initial sample was kindly procured by my reader Emanuella. Another sample was later sent by Lutens as part of their mailout, so that is given away to the readers.
*Share with link: Tuesday, February 15, 2011