It's easy to look down on the Aqua Allegoria line as an entry level for Guerlainophile wannabes. Compared with the house's megaliths, such as Mitsouko, Shalimar or Vetiver, these seem like fragrances with much less monumental heft and no aspirations for posterity. Yet this "allegorica" line hides a few gems that are more than a simple sent bon and some which manage to be memorable in themselves.
The Aqua Allegoria line began as an exercise in deduction in 1999: the baroque compositions of old were too complicated for a younger, budding Guerlainista who approached the brand from the point of reference of their mother's vanity and the fascination with their Terracotta makeup products. Guerlain was ripe for a change after influx of money from LVMH had poured into the old giant. Therefore a simpler, more joyful approach seemed like a good idea. Focus on streamlined formulae zooming onto the raw materials themselves in identical bottles was on the vanguard of a nascent approach to niche perfumery; only this time available at major department stores at affordable prices. If only things continued on that path for the perfume lover...but I digress. 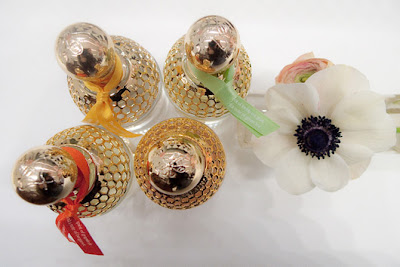 Perfumers' Rift, Changes in Direction
Before perfumer Mathilde Laurent and Jean Paul had what seems like the fallout of the century (the two are never mentioned in the same breath and all innuendo that Mathilde had worked for the brand was meticulously averted for years), a bunch of the first Aqua Allegorias were composed by her. Incidentally these are the best ones, in scope of creativity, elegance of structure and flair for the individualistic streak. Some of the more modern ones, especially the solo-frutastic ones, seem like they're forgetting they're fragrances and veer too much into the flavours drawer positioning. Lately the compositions have reverted to rounder bouquets (ex.Bouquet No.1) or soliflores, such as the upcoming Jasminora and Rosa Blanca, that hark back to the original issues more than 10 years ago.

Several fragrances in the line are no more: official word wants the scents to have been limited edition all along, one new coming after the old one tires out. But it wasn't so clear cut in the beginning and the survivors (Pamplelune, Herba Fresca) indicate that it might have to do with actual perfume sales figures rather than with any concrete concept. Which is a pity, as a couple (Winter Delice, Flora Nerolia) have something of a cult following, but there you have it. Some can still be found on online discounters or Ebay.

Launches & Design
The original line-up comprised 5 scents in 1999, thereafter an addition or so each year, with a few exceptions, and then picking up at the steady rhythm of two per year, usually each spring with an eye to summer wearing. The original bottle design revisited a simplified bee motif: the honeycomb was embracing the top of the smooth glass bottle with the sprayer built into the cap. The original packaging used a romantic design of flowers or other materials (accordingly) on the outer box, rendered like a delicate watercolour. In 2010 the outer packaging of the whole line was revamped so as to be uniform; all white, the differentiation now only being the colour of the Napoleonic bee embossed and the vertical line crossing the Guerlain logo on the front's top. To my own eye, the older packaging is more successful, even if less coherent. 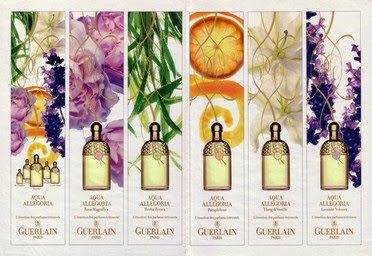 THE GUERLAIN AQUA ALLEGORIA LINE IN CHRONOLOGICAL ORDER:
Guerlain Aqua Allegoria Herba Fresca (1999): A real herbal green scent. Focusing on mint, but not quite: the dew on the leaves, the fine herbs, its beautiful grassy ambience raise it one notch up from many herbal efforts from others. A survivor, it still circulates on Guerlain counters and is always in production.

Guerlain Aqua Allegoria Pamplelune (1999): One of the beacon grapefruit renditions in the whole of perfumery. A wonderful creation that boosts the sulfurous fruit with bergamot, cassis, petitgrain, patchouli and vanilla. If you're among the lucky ones that don't turn this one into cat-pee on your skin (this is one fragrance that is testament to the diversification of effect according to skin Ph) you're set for all your summery needs. A proud survivor, it's still in production.

Guerlain Aqua Allegoria Rosa Magnifica (1999): Rose takes on a spicy mantle for a simple, but lovely interpretation of a classic theme. Miles away from classic Guerlain Nahéma of course. Disontinued.

Guerlain Aqua Allegoria Ylang & Vanille (1999): The most Guerlain-like in the original bunch, it is a floriental with great tenacity and radience. Ylang Ylang is boosted by vanilla and fanned on soft notes of iris and jasmine. Discontinued.

Guerlain Aqua Allegoria Flora Nerolia (2000): A memory of Sevillian orchards where bigaradiers and sweet orange trees sway their leaves and blossoms to the breeze. I find Flora Nerolia especially lovely, marrying as it does neroli, orange blossom and a hint of jasmine with a miniscule incense-woody facet in the bottom. (Lamentably) discontinued.

Guerlain Aqua Allegoria Gentiana (2001): Not groundbreaking, but if you enjoy the take of Angeliques sous la Pluie, you have good chances of liking Gentiana as well. Its mountaintop dry and cool air (due to wild gentiane) is a breath of freshness in a milieu where everyone is wearing something sweet and cloying. Discontinued. Was also available as scented massage oil.

Guerlain Aqua Allegoria Winter Delice (2001): The only truly limited edition, as it circulated in the autumn of 20o1 with a clear destination to be a Christmas/wintery scent, smooth, deep, sumptuous and comforting. The voluptuous depth of pain d'épices and labdanum is given a fresh counterpoint in pine (pinus sylvestris). Discontinued.

Guerlain Aqua Allegoria Lilia Bella (2002): A classic lily of the valley "clean" floral, slightly dishevelled by the inclusion of a healthy dose of lilac. Springtime and youthful floral. Discontinued.

Guerlain Aqua Allegoria Lemon Fresca (2003): The well-known diet drink called Fresca is synonymous with refreshment and energising. Guerlain took this idea, making it a tonic to spritz on, full of sour notes of lemon, lime and bergamot. A little wood underscores, while an anise touch (just a tad) adds an air de famille. But it doesn't venture far off the lemon start. Discontinued. 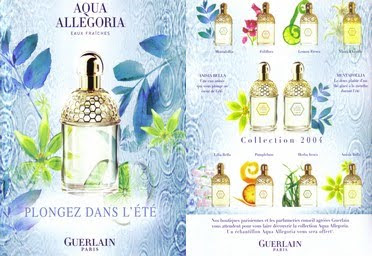 Guerlain Aqua Allegoria Anisia Bella (2004): Aniseed is a classic mainstay in Guerlain fragrances from Apres L'Ondee and L'Heure Bleue onwards and here it's given a smothering of volatile notes such as bergamot and basil which complement its melancholic spiciness, alongside sweeter jasmine, violet and the discreet backdrop of cedar. Discontinued.

Guerlain Aqua Allegoria Orange Magnifica (2005): This is the first of the "fruities" Aqua Allegorias that really ruined it for the rest. A lovely Calabrian orange with a discreet almond background, progressing from the fruity to the lightly floral (neroli, clean jasmine). Discontinued.

Guerlain Aqua Allegoria Pivoine Magnifica (2005): A very clean, scrubbed floral that boosts the effect with hesperidia and the mainstays of iris-violet that Guerlain is famous for. Discontinued.

Guerlain Aqua Allegoria Tutti Kiwi (2006): An odd combination of kiwi and licorice, fanned on sandalwood and vanilla for sweetness. Probably my least favourite in the line. Discontinued.

Guerlain Aqua Allegoria Figue Iris (2008): Green fruity scent with fig leaves and fruits, very summery, dusted with a hint of iris so as to be reminded of the heritage. Discontinued.

Guerlain Aqua Allegoria Laurier Réglisse (2008): Another unusual combination, this time laurel and licorice. This gives a soft and green fragrance that has a unique taste buds appeal. Original. Discontinued.

Guerlain Aqua Allegoria Cherry Blossom (2009): A sakura perfume, simple and spring-like. Fresh and a little bit sentimental fruity floral. [Not to be confused with the stand-alone Cherry Blossom limited edition in the Louis XV flacon].

Guerlain Aqua Allegoria Tiaré Mimosa (2009): A tropical note (tiaré) and one which is inspired by a tropical destination (mimosa is an Australia native). Spicy accents and citrus lift the sweeter base that includes vanilla, clean musk and vetiver. The popular "suntan lotion" theme. Still available.

Guerlain Aqua Allegoria Flora Nymphea (2010): The anniversary edition to celebrate 10 years of Aqua Allegoria is a floral with youthful image. I wasn't particularly impressed. Available from a bunch of places, often on offer.

Guerlain Aqua Allegoria Bouquet No.1 (2010): This was a travel exclusive edition that didn't circulate widely. A peachy white floral (jasmine, delicate fruity notes), I thought Bouquet No.1 is an elegant play on the ubiquitous fruity floral theme.

Guerlain Aqua Allegoria Bouquet No.2 (2011): A tropical take on fruity notes of litchi, fanned on rose and iris for tenacity and elegance. More info on Bouquet No.2 here.

NB: Dicontinued does not mean introuvable; it means out of production. There is still old stock left, some of which I have linked on each of the fragrances.