Reflecting on a classic fragrance which has inspired me into delving deeper into perfume history and appreciation, I can’t disregard L’Air du Temps by Nina Ricci, one of the most recognizable perfumes in the world. Even Hannibal Lecter is quoted smelling it on Clarisse Starling in Silence of the Lambs: “You use Evian skin products and sometimes L’Air du Temps… but not today...”.
Despite any foreboding connotations, the perfume's introduction in 1948 under a name halfway between Marivaux and Cocteau (denoting ‘the spirit of the times’) hallmarked a longed-for return to optimism. Much like Miss Dior was ‘tired of letting off bombs and just wanted to let off fireworks’, L’Air du Temps presented the new found hope for peace after the ravages of WWII, as reflected by the original flacon design of a sun with a dove perched on the stopper by Christian Bérard. 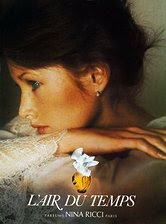 
L'Air du Temps is a triumph of bottle art and symbolism: The intertwining doves affectionately termed ‘Les Colombes’, a romantic theme by Marc Lalique, originates from 1951 and came to denote the virginal quality of the visual aspects of its representation, perpetuated in its advertising ever since. Originally the 1948 design envisioned by Jean Rebull and materialized by crystallier Marc Lalique involved a rising sun surmounted by a single dove. The interwining doves however marked the "kiss and make up" peace mood after WWII.
The "colombes" kissing motif also reflected the ever feminine, always understated and ethereallly romantic Nina Ricci sartorial fashions; nothing vulgar! The perfume became signage for fashions: "The most romantic gift of fragrance a man can give a woman" came to be accompanied by elfish gowns that draped the female form in a slippery, ethereal, 19th-century-aesthete nostalgic way; lacy ivory and white denoting youthful and -a little faded- aristocracy rusticating in the sunny French countryside.The L'Air du temps advertising mostly matched.
In 1999 the L'Air du Temps flacon was named "perfume bottle of the century". 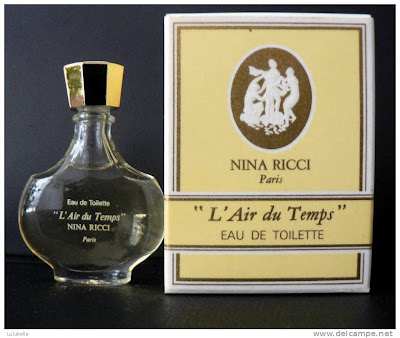 Scent Description
The formula of L'Air du Temps, composed by Francis Fabron, was simple : no more than 30 ingredients which co-exist in harmony, a chaste -but not quite- bouquet of flowers enrobed into the silken sheath of benzyl salicylate; a massive dose of an –at the time- innovative product aiding the blending and linear evaporation of the other molecules. According to perfumer Bernard Chant “‘[benzyl salicylate] produces a diffusing, blooming effect very pleasing to the public”. Coupled with spicy eugenol and isoeugenol, the effect becomes almost carnation-like with its clove tint : the very heart of L’Air du Temps ! The celestial opening of bergamot and rosewood is undermined by the sensuous note, half-lily, half-carnation, suave with the fuzziness of skin-like peach and a green hint of gardenia. Powdery orris, coupled with dusky woods –poised at the intersection of winter falling into spring- and a faint amber note finish off the fragrance. The effect is peachy-carnation-y and very characteristic: a sort of Doris Day, the way she was, rather staunchy actually, active and hard to eradicate, rather than how she appeared to be in those rom-coms of the 1950s, all mock innocence and eyelashes aflutter. 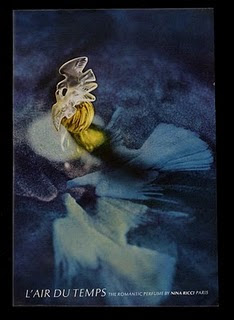 The success of the classic Nina Ricci fragrance seems to be the sassiness of its aerated, distinctive bouquet coupled with its refined classicism, sometimes maxed out to sentimentality : an aspect which prompted critic Luca Turin to joke it was created for romantics “who shed a tear listening to La Sonate au Clair de Lune*”. Maybe not quite that way, considering how the latter might have been an impromptu requiem on someone’s deathbed. At any rate, the trickle-down effect must speak of the need to do just that: the skeleton of the formula has been imitated in various soaps, deodorants and hairsprays for decades, while in itself L’Air du Temps has influenced many other fragrances from Fidji (Guy Laroche) and Madame Rochas to Anaïs Anaïs (Cacharel). 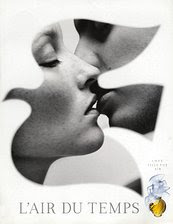 Nowadays the suaveness of the original formula has been somewhat compromised, due to necessary surgery dictated by allergens concerns… The peach base is mollified into synthetic submission, the carnation is less spicy and rich than before, the whole excellent exercise seems less itself as if it has been Botoxed into a perpetual complacent smile....yet L’Air du Temps is still instantly recognizable in its sillage, the trail left by the many that pass by wearing it : the mark of a true classic !
The bottle design can be a gauge of age: Vintage Eau de Toilette from the 1970s and 1980s circulates in the amphora-like bottle with the gold cap in splash, while spray bottles are long and encased in white bakelite. If the front of the bottle has the doves in relief and the plastic cap is rounded and in relief as well, your specimen comes from the 1990s. 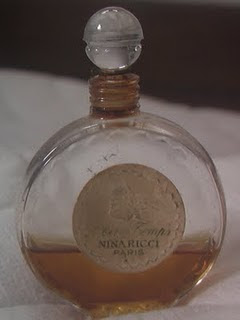 The vintage parfum is in the characteristic Lalique design with the perched doves atop. Old models of diluted concentration can also be in ribbed sprayers with gold overimposed sprayer mechanisms in squarish design. Really old versions can be in a round flask bottle with a boule cap in splash form.
Modern  eau de toilette on the contrary is in the familiar fluted oval-shaped bottle, reprising the dove design on the top in transparent plastic, the cap going over the sprayer mechanism.

This review is based on a text I had previously composed for Osmoz.com