Carnal Flower by Frédérick Malle alludes to the perception of tuberoses as flowers of "spiritual ruin"; at one point in time they were actually thought to provoce an instant orgasm to the fair maidens who might smell them!! Imagine the prudish customs of yesterdays challenged by that thought....In reality, Frédérick Malle seeking to author a white floral (no line is complete without it), visited California, where both surroundings and ladies exude scents of gardenia and tuberose apparently. But Malle is also Louis Malle's, the famous film director's, nephew, and therefore related to actress Candice Bergen, Malle's wife from 1980 till his death in 1995. 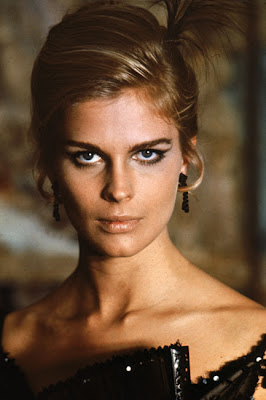 Inspirations
Candice Bergen, a Californian by birth, despite the "cool ice princess" facade proved how there is fire and passion beneath it, both in her personal choices and -relevantly to our discussion- in one memorable film, Carnal Knowledge by Mike Nichols in 1971. As Susan, shagged by Jack Nicholson and shared (and eventually married to) Art Garfunkel, the safer bet of two wandering males, she gives a bleak and blunt portrayal of the inherent mortality of romance and the decaying beauty of sex. The young Frédérick Malle had thus one part of the illustrious concept of his fragrance down pat! Carnal Flower it would be and the star would be a man-eating flower.

Composition
The rest was masterful orchestration: Composed by Dominique Ropion, renowned creator of the wonderful Ysatis by Givenchy , the horrifically flamboyant and attention-grabbing Amarige by the same designer and the controversial Une Fleur de Cassie for Malle again (no mean feat, its strong animalic base acting as a conversation piece among the brave), the new fragrance on the sketching board naturally presented an olfactory challenge as tuberose is one of those smells that can be heavenly or hellish, no in-betweens : the orchestration and interpretation is all that matters. A flair for the intense on the recipients' part is also mandatory , it would seem....

Perufmery Tuberoses: Where does Carnal Flower Stand?
The history of tuberose in perfumery passes through that parfum phare as the French say (a "lighthouse perfume", a landmark more like it): Fracas, conceived by the fauvist Germaine Cellier for Robert Piguet, with its fleshy, lush contradicting qualities edged upon the two extremes: creamy, candy-ish beauty and violent hystrionics leading to decay. Blonde by Versace is its poorer , aspiring -and rather successful- imitator with a flamboyant style that is very Italian, a civet come-hither innuendo and quite pleasant in calculated moderation especially in extrait de parfum. Serge Lutens Tubéreuse Criminelle presents a peculiar problem : one has to wait for the crucial first 15 minutes, when the demonic camphor note subsides, giving reign to the glorious creaminess and silky softness of the flower. Caron's Tubereuse is very radiant , yet perfume-y although lighter and not suited to today's sensibilities, I find. Carolina Herrera (the original one by the famous designer) is a bit too operatic, being so much infused with another bombshell : jasmine. Some of the rest (Lauder's Private Collection Tuberose Gardenia and Do Son by Diptyque) are either more positioned towards gardenia or too light for carnal aspirations. Vamp a NY by Honore des Pres is more candied than that and with a generous helping of pink jasmine, although equally magnificent. Tuberose perfumes are a real continent: there are variations in the verdure to suit everyone.
Carnal Flower was from the beginning a mission into offering something different.

Scent Profile
Studying the odor of the real living blossom, which is apparently everywhere in California, the quintessentially French company Editions des Parfum Frédéric Malle has managed to capture the air of a tropical garden at dusk, full of the breeze and the richness of the dangerously seductive blossoms inside the austere looking bottles of Carnal Flower. Malle himself was encouraging Ropion to go the extra mile, per their official info, while the concept was in the cards from the very beginning, going into speed dial when Ropion was introduced to a new "corrected" absolute de tubereuse: Americans love tuberose flowers. Hence the addition of a coconut note and strong salicylates with musks, boosted with orange blossom absolute, all familiar apertures, which channel a warm and inviting quality. But they also want a seemingly fresh scent, something that will titillate the nostrils and the mind. The camphor note, reminiscent of eycalyptus leaves, is a necessity: At once freeing the weight of the inherent indolic character of the blossom, which browns as it decays, and imitating the exhalation of tuberose in nature: greenish and somewhat mentholic from afar.  Yet the mentholated note does not make a grand appearence in Carnal Flower like it does in Tubéreuse Criminelle: the composition is therefore less striking, arguably less thought-provoking, but more wearable by more people as a result. Not a jarring note in sight; even the fruitier notes, like coconut and melon, are interspersed through sleight of hand to evoke freshness and sensuousness. Like Candice Bergen, it's beautiful, but then again, not without wits or substance, and although undeniably sensual and sexy, it is high class and a lady, not a slut, at all times. (For slut, if you choose, you can resort to Musc Ravageur by the same niche perfume company)

The development of Carnal Flower is smooth, into a heart of pure tuberose absolute with a sweet coconut-like facet (like Coppertone suntan lotion, another California reference) and solar salicylates (a natural pheromone of blossoms that aids pollination), without great changes throughout its drydown. The amount of tuberose absolute used is the greatest in use in all current perfumery: any more of this and you might burst! The initial opulence remains intact while after some minutes a slightly bitter-sweet, rubbery quality ascends to the surface, a natural effect of the real flower. It should be advised not to overdo the application because of this element. As it weaves its magic though, it never becomes cloying, but it does seem to steal the scene and all the best lines audible from several paces away. Carnal Flower is loud enough to be a classic-in-the-making.

If you're among those who find the fragrance overwhelming (and it can be), the exquisite Beurre Exquis in Carnal Flower (a body butter infused with the gorgeous smell of the fragrance) might be a lighter, subtler option for you with decent sillage and lasting power. Highly recommended and worth the monetary outlay.