Christian Dior has a stable of fragrances all tagged Poison, encased in similarly designed packaging and bottles (but in different colors), often creating confusion to the buyer who wants to know how the various fragrances compare. This article aims to explain the differences and similarities between Poison, Tendre Poison, Hypnotic Poison, Pure Poison and Midnight Poison and their Elixir versions henceforth. Short descriptions of how they smell, perfumers, fragrance notes, color schemes on bottle and box packaging as well as comments on concentration & body products available, longevity and sillage are included.

To begin in chronological order, first came Poison, the original, in 1985. It wouldn't be an overstatement to say that the original Poison was instrumental in the "loud" reputation that 1980s fragrances acquired. It is a powerhouse tuberose oriental with a berry-spicy-musky interlay, very characteristic of the time, quite excellently-made by Edouard Flechier and smelling great if used in moderation. Purple bottle in dark green box.
Notes for Poison original:
Top: orange blossom, honey, berries, pimento
Heart: cinnamon, coriander, tuberose, pepper, mace, plum, anise, ylang-ylang
Bottom: ambergris, labdanum, opoponax

Tendre Poison was the first "flanker" that came out 9 years later (1994), again composed by Edouard Flechier. It is a light green floral with freesia, a bit sharp and soapy in character. The base is pale woods, with a lightly powdery undertone that backons you closer. Although often referenced as a lighter version of the original Poison there is no comparison really. Tendre Poison is well-behaved, quite pretty and prim outwardly, a little unsmiling and cruel up close. Wears well and easily all year round and has good sillage and longevity. Light green bottle in green box.
Notes for Tendre Poison
Top: mandarin, galbanum
Heart: freesia, orange blossom, heliotrope
Bottom: sandalwood, vanilla

Available in Eau de Toilette 30/50ml, deodorant spray, body lotion and shower gel. Some of the body products seem to be discontinued in certan markets.

Hypnotic Poison came out in 1998, composed by Annick Menardo. The packaging reverted to something more daring, in crimson and a rubbery feel for the Eau de Parfum, so Hypnotic Poison is an almond gourmand oriental with a bitter edge at the start and a smooth vanilla base that contributes to a bewitching scent. Extremely popular (reports say it's a perennial bestseller in south Mediterranean countries, but also the US). Red bottle in dark red box.
Notes for Hypnotic Poison:
Top: bitter almond, caraway
Heart: jasmine sambac, jacaranda wood
Bottom: tree moss, vanilla, musk

Available in Eau de Toilette 30/50ml, deodorant spray, body lotion and shower gel.
There was an Eau de Parfum version previously available which seems to have been discontinued in favour of the Hypnotic Poison Elixir Eau de Parfum Intense.

Pure Poison coming out in 2004 was composed by Carlos Benaim, Olivier Polge and Dominique Ropion. Pure Poison is a radiant, expansive sharp floral with lots of white flowers (yet non indolic, meaning it's not in the least "dirty"), citrus essences and white musks/woods. The overall character is one of a clean, opalescent scent that is quite feminine in contemporary way. Pure Poison has an amazing sillage and is quite wearable year round. Pearl/opal white bottle in deep purple box.
Notes for Pure Poison:
Top: jasmine, sweet orange, Calabrian bergamot and Sicilian mandarin
Heart: orange blossom, gardenia
Bottom: sandalwood, ambergris

Midnight Poison is a modern "chypre" (in the vein of Narciso, Gucci by Gucci etc.) with subdued roses over a clean patchouli base, producing an abstract cool effect that is very modern. Composed by Olivier Cresp, Jacques Cavallier and Francois Demarchy, it is quite pleasant, if not very remarkable, with a dark green background that has a mysterious vibe aimed at the modern seductress.
Midnight-blue bottle in dark blue box.
Notes for Midnight Poison:
Top: mandarin orange, bergamot
Heart: rose
Bottom: patchouli, vanilla, amber 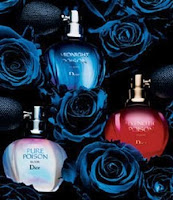 The various Dior Elixirs composed by Francois Demarchy came out with the aim to offer a more intense sensation blending the opulent base notes of the original Poison, along with individually selected flavours. The packaging is adorned with bulb atomisers on the bottle, boudoir-style. Each bottle replicates the colour scheme of the original fragrances they're named after. The formula is not silicone-based, but alcoholic, meaning it is sprayed like a regular Eau de Parfum.

Pure Poison Elixir was the first Elixir version for Poison and came out in 2006. Although the notes denote a quite different scent, the truth is there is no major difference with the previous Pure Poison, except for a sweeter, a tad powdery and warmer base that stays on the skin for an extremely long period of time.
Notes for Pure Poison Elixir:
Top: petitgrain, orange, green mandarin
Heart: orange blossom, jasmine sambac
Bottom: sandalwood, amber, almond, vanilla, cocoa absolute

Hypnotic Poison Elixir came out in 2008. Based on the original Hypnotic Poison fragrance it includes a licorice-star anise combination. However it smells quite similar to the regular Hypnotic Poison, although the tenacity is even more phenomenal.

Midnight Poison Elixir (2008) is based on the original Midnight Poison, enhanced with "intense, voluptuous, flavorful notes of caramel -fruity and toothsome, with an appetizing "toasted" fragrance - and the mellow, enveloping aromas of vanilla". It quite similar to the regular Midnight Poison apart from the sweeter caramel base which seems to kilter it off balance. Extremely tenacious as well.