In Oscar Wilde's The Picture of Dorian Gray, Lord Henry's wife's perfume leaves the scent of frangipani to linger in the room; the exact scent which troubled Jean des Esseintes, Huysmans's hero in À Rebours. "I guess he's just not the type that goes for jasmine perfume, but maybe he's what we need to mix with our blood now that we've lost Belle Reve", says Blanche Dubois to Stella about Stanley in A Streetcar Named Desire.
Frangipani, plumeria, jasmine, sampaguita, pikake...Although the above terms belong to roughly the same family of fragrant flowers, the olfactory profile of these delicious blossoms can be rather different, which necessitates a small guide into tracing their commonalities and differences. 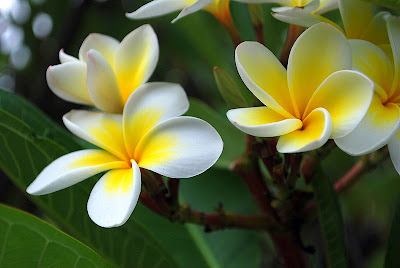 Plumeria is the genus name for the more commonly used frangipani flower. While the botanist name comes ~as is usual in science~ from the 17th century French botanist Charles Plumier who studied the plant (indeed it's also spelled Plumiera), the common name is due to the Frangipani, a patrician Italian family of the 12th century famous for clashing with the papacy. The habit of scented leather gloves with jasmine, musk and civet became all the rage in the 16th century when Marie de Medici brought it into fashion in the French Court. Gilles Ménage quotes the trend in 1650 in his Les Origines de la Langue Françoise.
Allegedly it was the Marquis de Frangipani who invented the secret formula used to scent leather so as to divest it of the off smells of production; and when the flower was discovered later on, people recalled how the Frangipani Gloves smelled and attached the name to the plant in a reverse way of homage.
Frangipani literally means "breadbreakers" from the Italian phrase frangere il pane as the Middle Ages Italian family were known to distribute bread to the poor during a great famine; their crest is testament to that fact.

If you want to capture a snapshot of that wonderful tradition of scented gloves, indie perfumer Ayala Moriel has a fragrance called Frangipani Gloves, inspired by that very custom. Ormonde Jayne also makes a Frangipani Absolute fragrance with peachy sunny notes that know how to charm till the cedar-rich drydown. In fragrances the peachy note of gamma decalactone can boost the fleshy scent of varieties such as those of plumeria. Chantecaille's Frangipane on the other hand is a woodier, lighter scent which relies more on orange blossom than the intoxicating and rather "heavy" note of plumeria. Other plumeria fragrances include Plumeria by Terra Nova, En Fleur by Dawn Spencer Hurwitz, Vanile Frangipanier by Laurence Dumont and Frangipani delle Indie by Tesori d'Oriente.

Other cultures and religions, such as Hindu and Buddhist, associate frangipani with temples, thus giving rise to its christening of "the Temple Tree" in the English speaking part of Sri Lanka. Its potential for perfume inspiration due to the sweet, narcotic scent even permeated incense: tropical incense blends with plumeria inclusion have "champa" in their name, such as Nag Champa. In modern Polynesian culture, the frangipani can be worn by women to indicate their relationship status; over the right ear if seeking a relationship, and over the left if taken. The scent of plumeria can be said to be a cross between citrusy and buttery, the sweet nuance appearing almost culinary with a hint of cinnamon and a worthy addition to any garden thanks to its colourful bouquet and fragrant emissions. 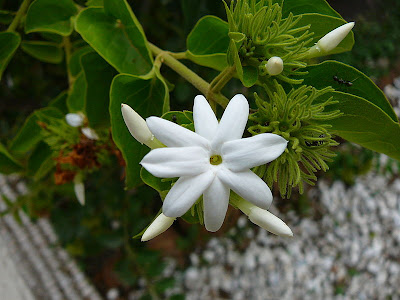 Pikake belongs to the wide family of jasmines (Jasminum): It is a specific species of jasmine, jasminum sambac or Nyctanthes sambac (nyctanthes literally means night-blooming) used in Hawaii for lei's where the name is uniformely applied instead of jasmine. It had made a vivid impression on me, upon opening botany books as a student, to find out that pikake is an homage to the half-Scottish, half-Hawaiian Princess Victoria Ka’iulani, famous for her attachement to both peacocks (the Hawanized name for which is "pikake") and jasmine flowers. Writes Mindi Reid [1]

"In Hawai'i, the small, pale and fragile jasmine blossom is called by the same name as a vivid and grandiose bird: "pikake"- the peacock. The duality of this "Hawaiianized" English word is thought-provoking; in English, it is the bird - a visual image of color, shape, and texture that is evoked, while in 'Olelo Hawai'i (the Kanaka Maoli - indigenous native - language) it is the flower those syllables bring to mind - a matter of intense, emotion-kindling fragrance".

In Philipinnes where jasmine sambac is the national flower ~imported as far back as the 17th century from India~ it's called sampaguita. The Spanish sounding name derives from the Philipinno sumpa kita, meaning "I promise you"; it's easy to see how this highly fragrant flower stood for devotion and erotic loyalty! I remember from my travels how Thailand and Singapore, alongside their famous orchids, prize this green vine that emits such a strangely narcotic, almost fleshy smell...
Specificaly it is "Maid of Orleans" , a variety possessing flowers with a single layer of five oval shaped petals, which is commonly referred to as "Sampaguita" (or Philippine Jasmine). The same type with the difference that flowers have doubled petals (resembling mini roses) is also referenced by the names Grand Duke of Tuscan and Kampupot, a variety common in India. Jasmine sambac blossom is characteristically the one which is used in China to aromatize tea, resulting in a delicate and revered blend called simply "jasmine tea".

If you want to identify a fragrance with the intoxicating, sweet scent of pikake, you can try Child perfume oil; it's almost solely comprised of pikake, reprising the heady aroma of the white blossoms as they open in the warmth of the summer evening. Ormonde Jayne has a fragrance called Sampaquita [sic], which weaves a lightly aqueous balance between freesia & water lily and a citrusy fruity top via magnolia & lychee; the effect is one of soapy jasmine blossoms.
Annick Goutal Songes is one fragrance which combines both frangipani and jasmine sambac (sampaguita) alongside a big helping of ylang ylang, resulting in an orgy of white flowers on a vanillic base.