In the pantheon of great modern perfumers it is not often that we come across women, at least during the first half of the 20th century. Amongst them, one star shines brightest, that of Germaine Cellier; untrammeled by convention, free-spirited in an era that frowned upon most of her customs, but which could not deny her bold, ebullient approach to perfumery. It is no accident that Guy Robert's book, Les Sens du Parfum, himself the stuff of legend, dedicates precious space to her opus. 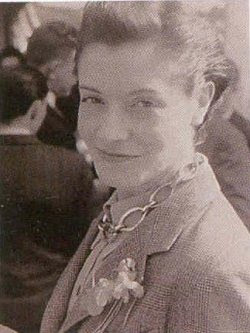 Her wit wondrously helped her into coming up with stunning compositions: The galbanum-souled Vent Vert by Balmain with its biting verdancy forever changing the visage of florals, the knife-scathing outlaw of Bandit with its intense leathery bitterness of quinolines in 1944, the oriental passport of Visa in 1946, the buttery radiance of tuberose in 1948's Fracas (all three for Robert Piguet), the nostalgic violet chypre Jolie Madame for Balmain (1953) which reworked the Bandit theme in more muted tones, as well as the masculine Monsieur Balmain which proved a success with both sexes.

One of her mysteriously disappearing acts is "Elysées 63.84" for Balmain, the name standing for the telephone number of the couture house, as well as a geranium-based Eau which Pierre Balmain fiercely guarded for his own use. For Nina Ricci she collaborates with Christian Bérard who designed the romantic heart flacon in Coeur Joie, an elegant and uncharacteristically delicate floral aldehydic of great refinement (1946). For Nina Ricci she also composes Fille d'Eve, with its "dirty hair" cistus note. Hers is the lesser known, but none the less majestic, La Fuite des Heures for Balenciaga in 1949, a Provençal herbs and jasmine formula of great radiance and tenacity. Among her portfolio there is also the agrestic Eau d'Herbes (Herbal Water) conceived for Hermès at an unspecified date during the 1950s meant to recreate just cut herbs, which remains an enigma, and several compositions for Elizabeth Arden for distribution in the USA during the 1950s and 1960s. (Click the links for my reviews on the scents) ....

This is part of a fuller article that was published on Fragrantica.com. For a comprehensive glimpse into one of the truly great perfumers of modern perfumery, please read my full article on this permalink.