Frequent Questions: the differences between concentrations of Narciso Rodriguez For Her

Narciso Rodriguez most successful foray into fragrance so far has been his original Narciso For Her. We were discussing the other day while reviewing his new Essence how Narciso For Her became the kickstart of a whole new genre of modern fragrances that aim at the young-ish demographic yet do not smell of fruity cocktails or vanilla desserts and for that he should be applauded. However the range of this fragrance is rather confusing to say the least, as every product in it has some difference in smell and packaging. To elucidate matters and help readers along, I am hereby trying a breakdown of all the different versions in packaging with reviews and comparison on the Narciso brand fragrances themselves. 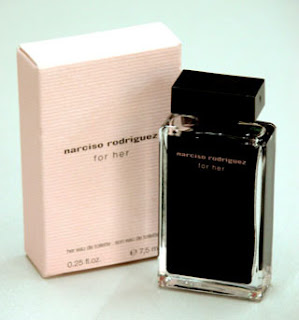 The original fragrance appeared first as Narciso Rodriguez For Her Eau de Toilette in a black austere bottle painted from the inside, so that there is a clearly discernible "edge" of clear glass at the bottle and the sides (this allows one to judge how much juice is left in the bottle too!). The lettering is in pink as is the box (where the letting is in black). I fell in love with this as soon as it hit the stores and I still cherish it. People of all walks of life loved it and there is a reason: It is soft, "clean" in the most sensuous sense of skin that has been bathed but is living its day along nevertheless; musky in the sense that it beckons you closer radiating harmonious warmth; and feminine all at once. Three days into faithfully wearing it, a compliment: "You smell very nice , like expensive soap! What is it?" Although I don't peg it as soapy, it gives an enigmatic vibe between just showered and sighing under a caress that won't remain at that for long. Its plaint nature makes it meld with one's personal smell ceasing to be something that floats above it and clinges on to clothing and bed-sheets in the most gracious manner.
The Eau de Toilette version is the most sillage-worthy (meaning it leaves a trail of scent behind when you wear it) and projects quite potently.
Interestingly, several people however have trouble smelling it properly due to specific "musk anosmia" (a common condition in which certain musks remain undetected from the nose, hence perfumers used a multitude in a single perfume so that the nose picks at least some). Others with less of a threshold for "living" smells report it is a bit "dirty" for their taste. As always in the subjective matters of fragrance opinions, your safest bet is trying it out before buying. Having said that it is terrifically well-made, even if I suspect it might be 100% synthetic, and a best-seller for all the right reasons! 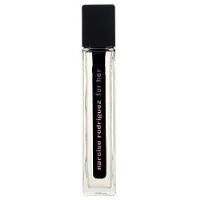 The parfum concentration of Narciso For Her comes in a roll-on 10ml/0.33oz for the purse (depicted on the right), in clear glass with black painted on the inside. The scent is the same, although the volume and sillage are being a bit toned down as the fragrance is smeared on rather than sprayed, which produces a difference in evaporation of the molecules. The lasting power is very good, same as with the Eau de Toilette, although the same problem with musk anosmia surfaces again for several people. 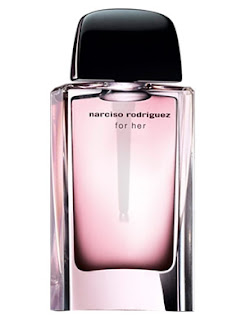 As of 2012, the previous version of the purse roll-on has been discontinued and a new Narciso for Her extrait de parfum version is issued with a dabber style bottle with a black curvy cap, as depicted above. 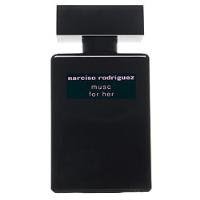 The bottle that is black on the outside, same design as the Eau de Toilette, without clear glass edging however, in a pour bottle, is the Narciso Musc for Her version. The lettering is again in pink, reading Musc for Her. Beware the confusion as this is a completely different scent: this is pure Egyptian musc lacking the floral tone (orange blossom) and alcoholic sharpness of the Eau de Toilette as well as the patchouli-woods base. The scent is the softest, most erotic thing one could wish for in the "clean" lightly powdery musks genre and although it is based on Abdoul Karim's Egyptian Musk oil that Caroline Besette Kennedy ~who was the friend and muse after which Narciso Rodriguez created his fragrance~ was buying off the streets of Manhattan, it smells very upscale. One of the missions of any perfume board worth its salt is to find decent alternatives to popular scents which are either hard to get or too expensive (and this one is at 150 euros retail for 50ml/1.7oz, but oh, so worth it!). Although Body Time Egyptian Musc and Auric Blends Egyptian Goddess have been proposed as substitutes for perfumistas on a shoe-string budget, I am reporting that none of those rather fabric-softener musks comes really close. There is something unutterable in Musk for Her which makes it enigmatically alluring like nothing else on the market today: not too sweet, not too sharp, not too laundry-like, it traipses along the way of familiarity and supple mystery which is the sign of any product worth making one's own. It is a gift to make to those who come really close to you to savour the nectar.
Narciso Musk for Her has an oily texture based on silicone to be used on pulse points or all over quite liberally because it is a light enough scent. As it becomes one with skin and does not project as much as the Eau de Toilette does, one solution would be to wear it on hair ends to extend its sillage-radius, a trick used with very good results.
As this is notoriously the product with the most complaints about not being able to smell it from numerous people it is highly adviseable to try it out before buying. Also, as silicone-based products might go "bad" (ie.losing their scent in this case) over time, one would be advised not to stockpile.
Edit to add: As of 2011, this is discontinued, nowhere to be found, making it a rare collectible.

The pink bottle with black lettering in a black box with pink lettering (the mirror image of the original, therefore) came more than a year after the initial products above and is Narciso Rodriguez For Her Eau de Parfum concentration. It has a slightly tweaked formula, resulting in a different scent. Its rose/peach-flesh top note is quite pronounced, veering it into more fruity chypre avenues than a woody musk, which didn't exist in the original Eau de Toilette. Less people seem anosmic to this version as the more floral elements take center stage.

Limited editions: There is a limited edition For Her bottle numbered and signed by the designer that circulated a few years ago. Also a bottle with little sparkly stars for the holidays of 2005 and a new home candle in a black minimalist tin. The white bottles are limited editions from 2006 and 2008 respectively to commemorate the scent's success. All those variations have the exact same delicious scent as the Eau de Toilette and are aimed at bottle collectors mostly.

There are also ancillary body products: a body lotion tagged Narciso Her Scented Body Defining Lotion (not very potent in the smell department)in a pink bottle with black label, a shower gel in a black and peach bottle and a squat pot of Narciso Her Body Cream in a black glass pot(better fare this one on lasting scent than the lotion). Additionally there is a Narciso Powder Brush with the product incorporated in the device, a Narciso spray deodorant and a Narciso Hair Mist in a 30ml/1oz spray bottle which is weaker than the Eau de Toilette but eerily reminiscent of its mysterious aura.

Narciso for Her had received praise even from the difficult mr.Turin on his blog on 27/11/05, when he noticed that despite not a great deal of innovation it sure smells wonderful. He later wrote in Perfumes, the Guide: "But give Narciso to someone you like and stand at attention as she sweeps past. You then realise that some fragrances, like gravitation, reliably generate an attractive force that day in and day out, without fuss or explanation, though theories abound".
Excellently said!

LIMITED EDITIONS/VARIATIONS IN THE NARCISO RODRIGUEZ "FOR HER" LINE 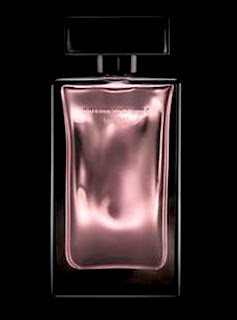 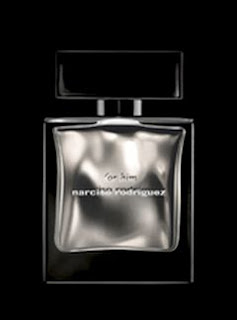 The two versions of Her and Him in "the Musk Collection" are limited editions from 2009 in shiny bottles. The packaging is black with a coloured inlay on the bottom citing "Musk Collection, Eau de Parfum Intense".
Narciso Rodriguez for Her limited edition Musk introduces musk in the central role, along with notes of ylang-ylang, jasmine and orange blossom.
Narciso Rodriguez for Him limited edition Musk, will fuse musk with essences of iris and red berries.
Available both in 50ml Eau de Parfum Intense. 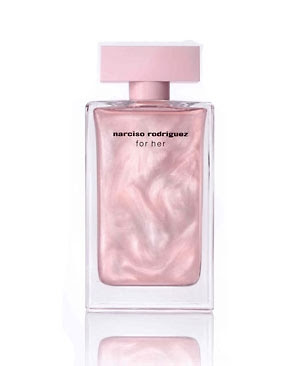 Narciso Rodriguez For Her Iridescent is a limited edition launched in April 2010. Perfumer Francis Kurkdjian made it as soft as silk, while the liquid contains tiny sparkling particles. Personally I haven't noticed any sparkling effect on either skin, hair or clothe, but it looks pretty on my vanity.

It is available as a limited editions of 50ml and 100 ml of Eau de Parfum. 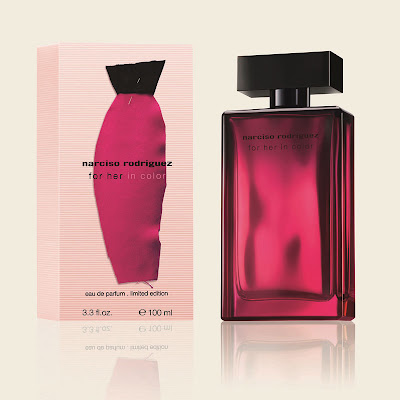 Narciso Rodriguez for Her in Color Eau de Parfum was launched in 2011 and is bottled in a fuschia bottle and pink box.  Available in 100ml.

Top notes are rose and peach; middle note is amber; base notes are musk, sandalwood and patchouli.

It's very close to the original EDP but with a peachier warm note in the floralcy of the core. 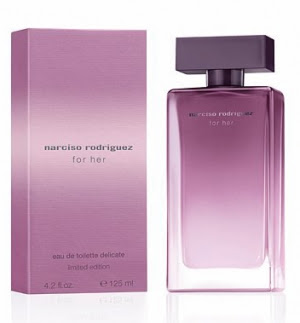 Narciso Rodriguez For Her Eau de Toilette and Eau de Parfum Delicate Limited Edition is launching for 2012. The bottles are recognisable by the lilac-tinge to the packaging and the "delicate" on the box (pictured above).
The fragrance is somewhat changed compared to the original NR For Her and features notes of vetiver, musk, african orange flower, amber, coriander, vanille, bergamot and black fig.
Available as eau de toilette in 125ml/4.2oz bottles of light purple and a matching box.