Sables flies under the radar amidst the masculine selection chez Annick Goutal, despite the fact that Harrison Ford is supposedly an ardent fan. I guess he's considered "old man" by now and not as hip for a celebrity endorsement. But Sables shouldn't suffer from malrecognition; this is an especially brilliant composition and a unique one at the time of its launch, in 1985. The burnt sugar aspect of helichrysum ~known also as immortelle or everlasting flower~ with its shades of curry, maple syrup and fenugreek aromata make this fragrance one of the most distinctive not only in the Goutal canon, but in general. The onle fragrance more daringly infused with this spicy-caramelic note is Eau Noire in the private line of Dior colognes, composed by Francis Kurkdjian (A scent for which designer Karl Lagerfeld is crazy about!). Asmar by So Oud (launched in 2010) is closer to Sables, although not exactly the same. 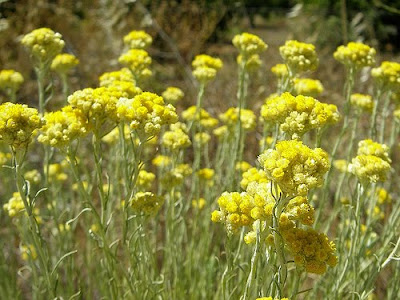 Immortelle is an aquired taste for sure. Not everyone feels comfortable smelling like Indian food and helichrysum italicum is called "the curry plant" by some. Still, the initially spicy fenugreek nuances (somewhat mentholated and bitter inky, like in good old Fernet-Branca digestif) in Goutal's Sables are mollified towards the caramelised smoky spectrum; a whiff of pyrazines and malt, for those who appreciate Jeux de Peau by Serge Lutens for instance. The curry note is joined by its conspirator in crime: cumin, with its perceived sweaty aspect, and by a little pepper. Yet one cannot exactly categorise Sables as "dirty", "skanky" or spicy, but rather as smoky sweet and cozy in either winter or summer. In my own personal experience, Sables is a child of the sun and the warmth, and performs best in minute amounts put on the belly or behind the knees in the heat.
Contrary to the standard perception of Goutal scents being ethereal and fleeting, this one is particularly projecting, leaving a memorable trail and lasts very long, so beware of overdosing. It's definitely not intended to be used solely a masculine, although the saltier quota of male skin brings out the herbal and more ambery facets to the fore (much like in Ambre Sultan), while it's sweeter on women. The longer the fragrance stays on warm skin, the more it manifests those burnt sugar notes allied with milky, woody facets of sandalwood without ever becoming cloying. On the whole, Sables's kinship is more with a Lutensian oriental oeuvre, or a more powerful version of Cuir Béluga by Guerlain, than with the Indian dish intensity of Dior's Eau Noire where immortelle contrasts with the medicinal-caramelic ends of spectrum of natural lavender essence projecting a more rustic, rugged edge. 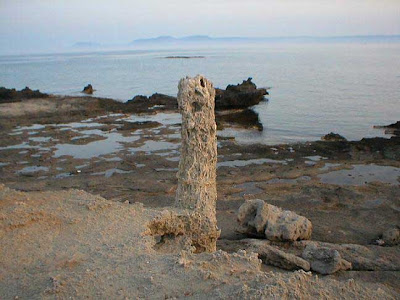 Sables saw the light of day after a journey in Corsica, imbued with the warm and spicy scent of wild immortelle. This fragrance is dedicated to men and women whose originality and subtlety make them just as they are–-that is, authentic. Annick Goutal created it especially for her husband, Alain, who played the violoncello, as a memento from a trip to the so-called Island of Beauty, where the scent of immortelle-sprinkled sand dunes had captured her mind.

To me Sables will always stand as the olfactory equivalent of a particular beach in Lesbos Island in Greece. It is a volcanic place, all hot springs and absolutely no fish in the water, a deserted sugar-like fine sandy beach near a fossiled forest. The warmth of the sun schorches the tree trunks laying in the background. A moment of eternity has just been mine and I can see the history of the earth in a long gaze...