"Body washes, cosmetics, perfumes, and more all boast of their pheromone contents. There’s just one problem: There is no scientific evidence that people produce or respond to pheromones at all, or that dabbing them on will make you more attractive to potential mates.
This dearth of scientific evidence didn’t dissuade Dial, however. The soap-maker recently released a “pheromone-infused” body wash, then held a speed-dating “experiment” in which nine blindfolded women had to choose between nine men (some had used the wash, some hadn’t) they would go out with in order to 'prove' the wash worked" [...] “We don’t claim using our product you’re going to hit a home run,” said Ryan Gaspar, a [Dial] brand manager. “We say, ‘We’ll get you to first base'." Read the whole article on Discoblog from Discover Magazine. 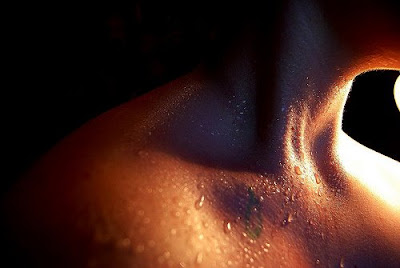 On the other hand, and far from the lathering board, cumin, an oriental spice of most often Turkish production, has been inumerable times linked to the scent of sweat on online fora and communities. The source of this rumour has been firstly the use of the cumin spice in many classic French perfumes which have a slightly "dirty" undertone starting with Roudnitska creations, the re-issued Femme by Rochas and numerous Jean Claude Ellena compositions; and secondly a quote from the book by Chandler Burr where he likens the smell of cumin to female sweat. Researchers at Firmenich however have disagreed: men's sweat smells of cheese and female sweat smells of onions, according to their research in their Swiss laboratories.

According to an article at the New Scientist: "[...]research in Switzerland involved taking armpit sweat samples from 24 men and 25 women after they had spent time in a sauna or ridden an exercise bike for 15 minutes. The researchers found marked differences in the sweat from men and women. "Men smell of cheese, and women of grapefruit or onion," says Christian Starkenmann of Firmenich, a company in Geneva that researches flavours and perfumes for food and cosmetics companies. The team found that the women's armpit sweat contained relatively high levels of an odourless sulphur-containing compound - 5 milligrams per millilitre of sweat versus 0.5 milligrams in men" , making female perspiration the more "unpleasant" one. Sulphur-rich materials include onions, garlic and grapefruit (which is why so often grapefruit scents can turn "garlicky" and sour on many women). The female sweat had ten times the level of an odorless sulphur-containing compound than men. It turns out that when this ingredient interacts with bacteria present in the axilla, it creates a chemical called thiol—which is the cuplrit for smelling like onions. Men had increased levels of an odorless fatty acid, which gives off a cheesy smell once it mixes with the armpit bacteria.

Incidentally experiements as to the attractive properties of androstenone secreted into male sweat have proven that clean sweat from men at a reproductive age is considered attractive to a substantial segment of the screening subjects.
Your cumin-containing fragrances can be absolved, ladies!!

Cumin (Cuminum cyminum) however is a fascinating material for perfumery indeed: almost green and aromatic on one end, very warm and aniseed-faceted on the other end. It is no wonder that Pharaohs, ancient Greeks and Romans all prized it for its rich aroma and its stabilising aromatherapy properties. One imaginative tradition wants newlyweds sharing a cumin-laced tisane as a means to ensure stability in their marriage.
The oil comes from steam distillation of the dried and ground seeds of the small annual plant that blossoms at the border of the Mediterranean, in China, and in India (the latter is the largest provider of black cumin, a more powerful variant from Northern Kashmir, which is prized in North Indian dishes and is frequently featured in the Garam Marsala sweet spice mix). It is frequently featured in men's perfumes to offset lighter notes and it imparts a wonderful carnality in feminine fragrances. It being a great divider, however, several people find a prominent note of cumin too foody or too "dirty", so sampling is definitely recommended for the following list of fragrances containing it.

Please also refer to my What are Animalic & "Skanky"-Called Fragrances Anyway article for more details.