Few perfumers in the course of the past 150 years have enjoyed such a sky-rocketing course to stardom as has the handsome Francis Kurkdjian, formerly a dancer, piano player and aspiring tailor and eventually a perfumer and co-founder of his own niche fragrance house, Maison Francis Kurkdjian. Kurkdjian (his name of Armenian descent pronounced “koor-zhan”) was the nose behind such fragrance best-sellers as Jean Paul Gaultier’s characteristic male-torso-flacon Le Mâle, Armani Mania, Miracle Homme, Elizabeth Arden Green Tea, Narciso Rodriguez For Him and For Her, Acqua di Parma’s Iris Nobile as well as the initial Christian Dior private "cologne" fragrances Eau Noire (2004) with its daring use of helichrysum/immortelle that recalls maple syrup and curry. 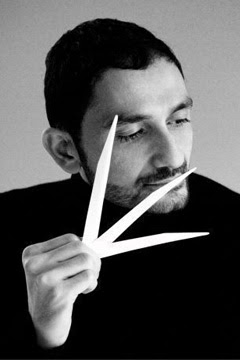 “Francis was behind around 30 blockbusters, from global blockbusters to blockbusters in niche industries,” says Marc Chaya, president and co-founder of Maison Francis Kurkdjian Paris (MFK). “He worked with Romano Ricci on niche line Juliette Has a Gun [ed.note: Miss Charming and Lady Vengeance, both based on delicate musky rose accords which he loves], and also did Rose Barbare for Guerlain's boutique exclusive line.” More impressibly Francis recreated Marie Antoinette’s scent based on a book about the French queen’s perfumer by Elisabeth de Feydeau, and he scented the palace of Versailles’ fountains for two special events with his beloved, trademark metallic rose accord.

Indeed Kurkdjian seems to have favourite themes which he manipulates into his compositions: two of them make a frequent apparition in feminine fragrances; the musky rose that feels fluffy and yet a tad dusky thanks to woody patchouli nuances at the background (Lady Vengeance, Rose Barbare), as well as the man-made, sweet, clean and fresh, piercingly bright orange blossom accord which he perfected  for Narciso For Her and respun in Lanvin's Rumeur in 2006. He also loves his musks and ambrox, especially in his masculine fragrances, fusing the warmth and clean feeling of the former into the soothing hum of the latter. For those reasons there's things to love and things to shy away from in his work, but the talent and consistency of his work is undisputed.
Francis's perfumer idol is none other than prolific perfumer Alberto Morillas, one of the greats in the business; with sales like the ones he's generating, however, Kurkdjian isn't far from being admired by fans. His work is respected by other perfumers, but mostly adored by discerning customers, often of the celebrity of perfumes-connoisseur Catherine Deneuve (who loves the rich Lumière Noire pour femme, which was born out of her comission for a private scent, but she later agreed to add it to the line when Francis opened his own house) Kylie Minogue (who wears Apom pour Homme) is another dedicated customer. Catherine, the Duchess of Cambridge (formerly known as Kate Middleton) has been an inspiration for Kurkdjian: the occassion of the royal wedding made him picture her in something intimate and warm, like the new Elie Saab fragrance he created. (We now know Kate went with something completely different, but that's besides the point).
His bespoke service involves a travelling "crate" with bottles of essences which he brings along on a scented profiling of the individual: the process can be laborious and take from 3 months (sending back and forth samples for evaluation and recalibrating) to one year for those with very definitive views on the subject! The project had began casually enough; talking on the plane with well-heeled co-traveller Terry de Gunzburg resulted in a comissioning of a tailor-made fragrance, one which smelled of "orange groves in Italy and earth" (according to an article by Susan Irvine on British Vogue in the mid-1990s) 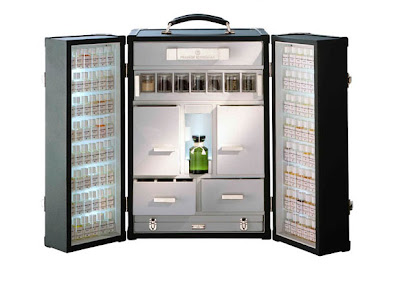 Francis Kurkdjian was born in Seine et Marne on May 14th, 1969, to a family outside the fragrance industry: his grandfather a men's tailor, his grandmother an inspecting eye in the family business. His first scented memories involved the aroma of sewing oil, clean cloth, tailor chalk and the spice rack sneeking in from the pantry, while an overseeing Art Deco panther was looking on the proceedings. His whole professional ethos was influenced by the ideal of giving pleasure, much like those in the tailoring business are brought up to do.
Francis studied at ISIPCA, the eminent French perfumery school, before composing Le Mâle at 23. He won Prix François Coty in 2001 and the rest is history. The irony is Chaya had no idea who Kurkdjian was when they met at a Jean Paul Gaultier fashion show. “Francis said to me, ‘I am a perfumer,’ and I said, oh, really, does such a thing exist? I thought that was Gaultier doing it himself.” Chaya eventually quit Ernst & Young to co-found and head Maison Francis Kurkdjian in 2009. “Founding MFK was about bringing fresh vision to the fragrance industry,” Chaya says. “It was about founding a modern luxury fragrance house and celebrating the talent of one of the most talented perfumers of our time.” Kurkdjian is more restrained in his evaluation of the company: "La Maison Francis Kurkdjian is an expression of my idea of beauty in perfumery and luxury in general. This House is a tribute to Paris - her spirit of freedom - and blends tradition and technology. My House is dedicated to small joys distilled into 24 hours of perfumed life. Each experience is an olfactory story that lives within my product".

Aqua Universalis
A fresh unisex cologne based on the mock sweet orange note which permeats "clean" white floral compositions and laundry detergents (and indeed the house's own laundry product aromatized with the same scent), flanked by hesperidia on top and musk/ambrox on the bottom.
Aqua Universalis Forte
A more concentrated (40%) version of the "clean & fresh" Aqua Universalis theme with boosted Calabrian bergamot, added citron, added florals (rose and jasmine)and a more powerful musk.
Pour le Matin
The vision of a Mediterranean garden, replete with rustic herbs (thyme and lavender). Available as Cologne and Absolue (Eau de Parfum)
Pour le Soir
The vision of Francis's mother in a fur coat for a night out: powder and lipstick on, rich fragrance leaving a seductive trail behind.Uniting the holy (benzoin incense) with the profane (animalic and cumin-rich accords), it's a perfume to be noticed in. Available as Cologne and Absolue (Eau de Parfum), the latter featuring intense cumin and added ylang ylang.
ApoM pour homme & pour femme
Basically an acronym for "a piece of me", the duo was inspired by travels to Lebanon and the Lebanese people with their dark good looks. The scent speaks of orange blossom's beauty and cedarwood's austerity, while being infused with ylang ylang for the feminine version and with (sweet, narcotically floral) and amber for the masculine one (sportier and manly).
Lumiere Noire pour homme & pour femme
Spiced rose, cumin, hot pepper and patchouli, plus narcissus for her and mugwort herb for him mingle in the fragrance equivalent of a long evening gown and a tuxedo: the rich, decadent composition is truly luxurious.

At the end of t2011 MFK will release small, five-milliliter perfume roll-ons perfect for the purse and on the go. The packaging including the stoppers on the flacons are inspired by the zinc & gold rooftops of Paris.The line already incorporates incense paper strips (infused with benzoin resin), leather bracelets permeated with essences, deos, laundry detergent in Aqua Universalis scent, scented candles and room sprays and Les Bulles d'Agathe, soap bubbles in either mint, pear, cut grass or violets scents for the kid in us!