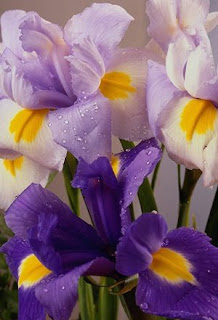 Like Charles Dickens knew so well, there is some charm in correlating different things and finding respective affinities. After all one would devoutly wish for an interaction between entities in the universe; a sense of belonging, of not being cut out. Dissimilar things can resemble each other in some ways while their contrast is piquant and intriguing. Such is the case with two iris perfumes that came out recently: Iris Ganache by Guerlain, their 5th scent in the exclusive L’Art et la Matière exclsuive boutique line and Prada Infusion d'iris, a new feminine scent from the italian leather and fashion company.

Guerlain tells us that this new scent is


which roughly translates as "iris butter worked like patissery ganache".
Ganache is a sort of chocolate cream that is thick and smooth, more solid than liquid. One would assume that we are dealing with a gourmand iris and that one would not be far off.

Iris/Orris is the rhizome of a beautiful flower, mystical, subtle and discreetly melancholic, encompassing dusty, powdery and mineral qualities. The essence of a fairy that is about to die in a puff of her delicate wings. In Iris Ganache that delicate fairy is munching meringues and feeling quite well, thank you very much. Perfumer Thierry Wasser (aided by artistic director Sylvaine Delacourte) managed to marry opposites creating something that is decidedly not as audacious as it first sounds, but rather a fluffy concoction that has a tinge of violets, quite like those sweet ones surfacing in Guerlain's more commercial scent Insolence. The feel of the violet is delectable, with a tinge of milky kid's chocolate drink, a direction that was explored in one of the limited edition versions of Oscar de la Renta's, namely Oscar Violet. There, again, the unmistakable dusting of sweetened Nesquik is painting the picture in foody terms. One might even think of the light orientalised theme of last year's Ange ou Démon by Givenchy. Suffice to say that this reminiscence does not great originality make for Iris Ganache...

The opening on bergamot and cinnamon is abstract and not as spicy as that in Musc Ravageur by F.Malle, although I am sure they were aiming for something sexy in that direction.
However, this is what makes it approachable despite the "difficult" for many note of iris. If we are to take Dickens's approach to the fore, Iris Ganache is decidedly French, representing Paris, all cafés and bistros; not Café Flore with its existential milieu of Sartre and Beauvoir, animately drawing puffs from their dark cigarettes that the French love so much. This is rather a bourgeois salon de thé, where the guests are sporting pouffy chiffon blouses that caress bodies prone to sensuality thanks to the ambery fond and the musk that embrace the white chocolate. This is the less cerebral and intellectual side of Paris as befits a house that was infamously producing scents for cocottes.

Prada Infusion d'iris on the other hand is more London-like, less indulgent, much less gourmet: all wet pavement and airy notes of a steely sky that sustain themselves on a very slight vanillic base that comes from benzoin. Poised between the crystalline opening of Iris Nobile by Aqua di Parma, a fresh breath of citrusy sensuality, and the earthy yet light depths of Olivia Giacobetti's Hiris for Hermes, Infusion d'iris is the equivalent of a metallic-hued slip of a dress over a young body that radiates intelligence and discreet sensuousness. A woman that enters an indian temple, inquisitive and with a mystical yearning. There is a smooth feel to it that caresses the soul, a nod to a thinking woman's scent, with a touch of childlike softness that reminds me of an infant's s hair washed in Johnson's Baby Shampoo. The liaison is weird no doubt and the breakdown of notes does not do it justice.

The mention of lentisque made me see that it is mastic, the very Greek resin from the island of Chios that is used for the world's only natural chewing gum, skincare products, liquors and products for medicinal use. I can't say that the aroma of mastic is instantly recognisable as such, despite my familiarity with it. However there is a greeness and woodiness that makes for a very endearing emotion; that of familiarity, of belonging, of touching the earth.

Prada claimed they got inspired by an old technique of haute parfumerie (infusion) that allowed the roots of iris to "marinate" for 6 months so as to render the true soft, fresh and powdery aroma of iris and Daniela Andrier for Givaudan succeeded in producing one of the loveliest scents of the season, even if I suspect there are synthetic aromachemicals at play. It comes in minimal light pistachio-green-labeled bottle of Eau de Parfum and it is wonderfully tenacious without ever becoming suffocating.

While Iris Ganache will appeal to those who do not go for intense, carroty irises like Iris silver Mist by Lutens, Infusion d'iris might fill the void when the mood calls for something airier than the former.