The chemistry of fragrances seems like an arcane side-path in the vast avenue of pretty smells. Those who venture there are either chemists, eternal students or people reading perfume boards. On those last ones, Iso E Super is nom du jour due to recent rumours of restricting its use to specific ratios in products (and they're many!) and due to its increasing popularity, some of it attached to the work of master perfumer Jean Claude Ellena who has experimented with its magic properties many a time in the past to glorious effect: Terre d'Hermès, Poivre Samarkande and Déclaration are utilizing lots of it, exploring minimalism: the play of scents note-for-note with no sentimentality attached. 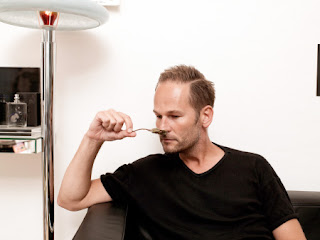 Even an entire composition, Molecule 01 by perfumer Geza Schöen of niche brand Escentric Molecules (his Escentric 01 also features it in high ratios along with pink pepper, lime peel, orris and incense) is composed of nothing else but it, diluted in solvent, because the perfumer loved it so! I am hereby reminding you that he is the perfumer who created HSIDEWS for artist Sissel Tolaas and he has collaborated with the London-based niche brand Ormonde Jayne. The theory behind Molecule 01 and IsoE Super was that it would create an appealing effect to those smelling it on the wearer without it being perceived as a "perfume"; the ultimate skin-scent, much like natural ambergris to which it mimics certain aspects would act. Another scent which officially contains it is Maitresse by Agent Provocateur, while the masculine fragrance Fahrenheit by Dior (1988) iincludes a 25% Iso E Super in the compound. In the legendary woody oriental Féminité du Bois by Shiseido, under the maestro Serge Lutens's direction, the material serves as an harmoniser between the plummy effect of the fruits with the violet ionones and the cedarwood bottom notes. Iso E Super is used in so many fragrances today that it would be hard to compile an actual list that would not bore everyone silly! But what the hell is Iso E Super?, you might ask. Let's take matters at the top.

Iso E Super® is the trademark name of aromachemical 7-acetyl, 1,2,3,4,5,6,7,8-octahydro-1,1,6,7-tetramethyl naphthalene and I guess it's pretty obvious why it's called that instead of its long organic chemistry name. According to International Fragrances and Flavors Iso E Super is


"Smooth, woody, amber with unique aspects giving a ''velvet'' like sensation. Used to impart fullness and subtle strength to fragrances. Superb floralizer found in the majority of newer fine fragrances and also useful in soaps. Richer in the desirable gamma isomer than isocyclemone e".

Arborone is the odor active enantiomer of Iso E Super, with its clean woody and pleasing aroma.[1] The uses of Iso-E Super are legion: from bleach and deo sticks to soaps, shampoos, laundry detergents and fine fragrance. Given that its colour is almost transparent to very light yellow it poses no problems in being incorporated in formulae and is also used in the pharmaceutical industry.
Despite the IFF being the company to trademark it, Chinese companies such as Zhejiang Winsun Imp. & Exp. Co., Ltd. do provide it at a concentration of 90% for various uses. Home-made mixes would suggest one part Iso-E Super to 9 parts base, such as dipropylene glycol/perfumer's alcohol (therefore a 10% concentration). Although neat use on skin isn't recommended, minor "accidents" of spillage have not produced anything sinister. Taking in mind that it is quite inexpensive, it is perhaps of interest for apprentices and amateurs alike to experiment themselves at high dilution.

Smelling it in itself one is surprised by how almost non-existent a smell Iso-E Super has; not something one would describe as a smell in so many words, it's unapologetically synthetic and perhaps vaguely cedar-like, slightly sweet. It seems to vanish very quickly and resurface on skin in intervals from time to time very discreetly: The heat of the skin is intergral to its volatilising properly and it seems that any test on paper would not give an accurate perception of its true nature. It is however quite recognisable once you get to sample it and you will have fun detecting it in many major fragrances on the market todat. This subtle "skin-scent" effect is what in perfume-lingo is used to evoke that a fragrance stays close to the skin, not projecting in a wide radius; but also that it has some skin compatibility effect that makes it smell not like a usual perfume. 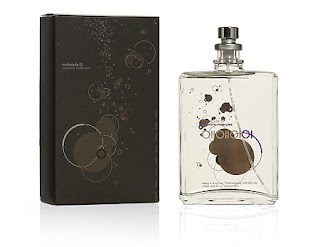 Therefore IsoE Super soon gained the reputation of it acting like a pheromone, that invisible aroma that is supposed to attract same species potential sexual partners and ensures recognition of compatibility between mates. Plainly explained, pheromones act to the vomero nasal organ ensuring that pigs mate with pigs and not rhinoceruses for instance! Much as the matter is exciting and intriguing hower, the scientific community has not been able to conclusively establish validity in the theory of pheromones working in humans so far, although popular mythology is rampant with examples of products aimed to achieve this magical attraction (such as Androstenol, Androstadienone, and Androsterone). In an interview given by perfumer Geza Schöen on the creation of Molecule 01, he intimated:


"When I was introduced to ISO E Super in 1990 I gave it to a friend of mine to wear. We went out to this bar in our hometown and it took only a few minutes until this woman steered straight into our direction to inquire about who smelled so lovely! Since then I knew that this stuff is special indeed. I suggested it to the guy who was in charge of Diesel back then and he said that he felt that this is a bit too much - even for them!" [2]

He's quick to elaborate however that it does not act as a pheromone (that's a misconception if scientifically examined) but that simply it's "not possible not to like it", as no one has ever commented he/she doesn't like its particular smell per se.

Perhaps the most vexing matter to perfume enthusiasts however has been how Iso E Super is one of the 14 chemicals that have been recommended for study by the National Toxicology Program (NTP) with impending restrictions on its use. Ever since as early as 2000 the matter has been in discussion. In a letter by Betty Bridges, RN Fragranced Products Information Network (http://www.fpinva.org/) addressed to Dr. Scott A. Masten, Ph.D. from the Office of Chemical Nomination and Selection, Environmental Toxicology Program of the National Institute of Environmental Health Sciences in 2002 we read the following:


"International Flavors and Fragrance's suggested use levels of Iso E Super is up to 10% of the fragrance formula and is recommended for use in a variety of products (IFF, 2002). Isocyclemone E's (a material with a different ratio of isomers, same CAS# 54464-57-2) suggested use level is up to 30% and is recommended in a variety of applications.(IFF, 2002) [...] Considering Iso E Super's similar structure to AETT and AHTN, two polycyclic musk compounds with known concerns, it is likely that Iso E Super and other chemically similar materials would also bioaccumulate in human tissue, persist in the environment, and have health concerns. There are concerns related to AHTN causing liver toxicity and discoloration. Galaxolide, another polycyclic musk has similarconcerns, but to a lessor degree (SCCNFP, 2000) Chromogenic properties have been associated with neurotoxicity (Sabri, 2002)"

Before publication of the 43rd amendment issued by IFRA it had been rumoured that Iso E Super should be a restricted raw material. This doesn't mean that it is not to be used any more as novices often assume erronesouly. It simply means that it should be incorporated in a formula below a certain level for it to be commerialised (and of course one could do whatever they pleased if they made a do-it-yourself formula at their own labs/homes!). On the other hand another aroma material, Boisvelone (C16H26O) closely related to Iso E Super (but reportedly a little more elegant; I haven't tried it myself while one source[3] reports it as the exact same thing) has disappeared from commercial use. According to one perfumer currently teaching [4] however, a feminine "alcoholic" product (that means an eau de toilette, eau de parfum or extrait de parfum ~generally any product with an alcohol base) there is a limit of approximately 20% of Iso E Super in the final product. Although it might seem like a lot, if you are composing an Eau de Parfum, which means a 15-20% dilution, you're well within limits still even if the entire fragrance consists of Iso E Super. Luckily for all of us, the latest amendement of IFRA can be downloaded here and it seems to make us sigh a sigh of relief for now: Iso E Super is not yet restricted. ** [Please see addition on the bottom for current info on IFRA approved ratio]

Hot on the heels of the sinister rumours was the prevalent concern of perfume lovers whether the fragrances that feature it (with Jean Claude Ellena's most prominently) would suffer from it. It was only the other day that the matter was brought again to the table on this very venue, while discussing Déclaration by Cartier, one of the most influential of Ellena's fragrances. Since the objective of Perfume Shrine is to be very clear in what is only a hypothesis on our part and what is a matter of fact, we took things in our hands to further investigate and the resulting message is even more assuaging, discouraging you from frantic stocking-up of fragrances which you would fear would be unrecognisably altered. The fragrances by Jean Claude Ellena will not be altered or influenced by any -as yet only suggested for the future- restrictions of Iso-E Super ratio as they are already well below the ratio proposed for the restrictions. The information is official and comes from mr. Jean Claude Ellena himself. I hope this article proves useful to you!

Here is a table of Top Ten Fragrances with Regard to Their Content in Iso E Super
No., Fragrance Name (Company, launch year), Iso E Super
[NB. the percentage is in regards to compound, not diluted ready to use product]


EDIT TO ADD/AMEND 2011: At the time of writing this was the correct info. As of 2011 however the IFRA industry regulating body has set a maximum dilution limit of 21.4% in the compound. Jean Claude Ellena's scents and the majority of scents using it are relatively safe, as a mere 1% in the formula in enough to provide the qualities it's famed for, but it is the updated info for anyone caring to use it in their own formulae.

Pics from Iheartberlin.de and Hermes.
*Share with link: Friday, March 06, 2009