In Giambattista Basile's charming tale The Murtle from Il Cunto de li Cunti (The Tale of Tales, 1694), a sprig of myrtle is transformed through the liberating love of a prince into a beautiful woman who regenerates even after evil forces tear her to pieces. Almost tasting the thick retro-baroque prose of the author I am contemplating how the essence of the tale is caught in a fragrance which defies the stylistic approach, choosing to place magic and beauty into a zen setting. Un Matin d'Orage, the latest fragrance by Annick Goutal, means "Stormy Morning" and was inspired by a Japanese garden after the rain, evoking the idea of delicate white petals in dew, with discernible notes of gardenia, jasmine sambac and Indonesian champaca. 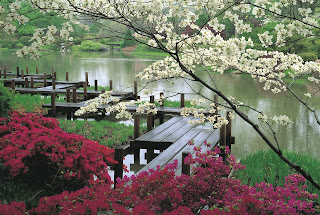 Isabelle Doyen, resident perfumer for parfums Annick Goutal, is ingeniously re-interpreting both gardenias and ozonic floral fragrances through an approach akin to painting a watercolour in vivid hues which make you momentarily doubt the duo-dimensional reality of thick drawing paper; an oxymoron that is breaking somewhat with both the well-worn-slipper feel we have come to expect of prettified, neoclasical scents of the Goutal portfolio (for the flowing haired Ophelias and the accompanying Mr.Darcys with bohemian fashion sense) and the en masse manner in which white florals are treated from the perfume industry as creamy textured pattiserie notes folded into huge tropical leis. Like I had said when first reporting the news of the upcoming Goutal fragrance: "This conceptually reminds me of both Après l'Ondée by Guerlain (the after-the-shower garden part) and Un Jardin Après la Mousson by Hermès, (the Monsoon storm evocation ) although from the listed notes one would deduce that the limpid bog water and transparent gloom might not be there. Although Annick Goutal already has a fragrance tagged Gardenia Passion in their line, the scent actually emits the ruberry feel of a proper tuberose rather than gardenia, so it's not like they're re-hashing ideas." Indeed the watery aspect is here but with a softer, less stagnant fruity or spicy nuance than the Hermès offering. Nevertheless if Fleur de Liane for L'Artisan Parfumeur, Vanille Galante and Un Jardin Après la Mousson for Hermès and now Un Matin d'Orage are any indication, the Lazarus-resurgence of the aquatic floral is looking like a strong contestant for your attention in the following couple of years at least.

Gardenia is a fascinating blossom, no less so because of its extensive scope of transformative stages: from the slightly bitter budding greeness, the mushroom-like overtones of musty wetness (which nota bene it was Colette who first described as such), into the lush, still fresh flower that has just opened; and from then inevitably seguing into creamy, narcotically sweet and velvety ripeness, into the dying stage of indolic decay when the petals brown and wither...Such a parallel with human growth and decline could not have escaped the attention of perfumers who have been trying to replicate the effects with styrallyl acetate (naturally found in gardenia buds), jasmolactones and at scarce cases with monumentaly expensive gardenia absolutes rendered through experimental enfleurage. Some gardenia perfumes try to be figurative, creating a very realistic olfactory image of gardenia bushes like the ones composed for Yves Rocher (Pur désir de Gardenia), the wondrous hologram of Private Collection Tuberose Gardenia by Lauder or cult-scent Kai. Some don't even try, despite the name, like the suavely musky Cruel Gardénia, traitors to holy causes with variable results. Others go for baroque exagerration which like an angled composition by Caravaggio creates tension through dramatic chiaroscuro and the accentuation of one facet over others, pushed to extremes; example: Tom Ford's Velvet Gardenia. And others still go for an impressionistic approach in which the gardenia becomes an accent piece in a moment suspended ad infinitum, when a coalescence of particular elements creates a dreamy memory ~like gardenias floating on a bowl of water in some postmodern urban appartment in Marc Jacobs eponymous Eau de Parfum, a willowy girl with lank, dark hair picking one up to put behind her ear. 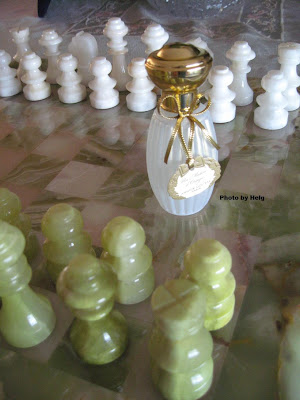 In Un Matin d'Orage that flowing gardenia on the water is prickling and alive, discernible as such, and coming out of the bowl, breathing deeply the steely blue air, under a drizzling mist that showers it with flinty sparks of an impending electrical storm. The tension is provided by a jolting effect of dew-drenched leafy accents reminiscent of green tea and still whitish peach-skin with a slight smokiness and lemony-anisic accents (magnolia, ginger, shiso*) that provide an intriguing contrapunto to the floral smoothness of gardenia, green jasmine vines and champaca. The ozonic cool part feels like a new technique has been short-cirquited into creating what was 15 years ago created through Calone but without Calone*. The flowers are separating into soft billowing layers that overlap, creating a smooth impression of dewy beauty. The jasmine is green and cool between hedione and orange blossom, like the one rendered in Pure Poison. There is no meekness in the gentility, no paleness in the ether of Un Matin d'Orage and the impression subsists for a long time, as if we're left to see a zen garden tingling after the storm. Not for tropical gardenia lovers, but to be explored by modern anchorites.

The characteristic feminine bottle of the Goutal perfumes gets a pearly white opalesence for Un Matin d'Orage and is issued in both 50ml/1.7oz and 100ml/3.4oz sizes of Eau de Toilette. More widely available in the coming months.


*Calone is an aromachemical used in the 1990s to render an ozonic marine note, smelling halfway between a watermelon and a cantaloupe.
**The Perilla note (often referred to as shiso in Japanese cuisine) is interesting in that perilla seeds form an essential part of the seven spices of Japan (originating more than 300 years ago in Kyoto)while green perilla leaves are used for sushi or sashimi. The essential oil steam distilled from the leaves of the perilla plant, consists of a variety of chemical compounds, varying depending on species. The most abundant however (comprising about 50–60% of the oil) is perillaldehyde ~most responsible for the aroma and taste of perilla. (please read about aldehydes here). For reference a fragrance focusing on perilla/shiso is Shiso by Comme des Garcons.